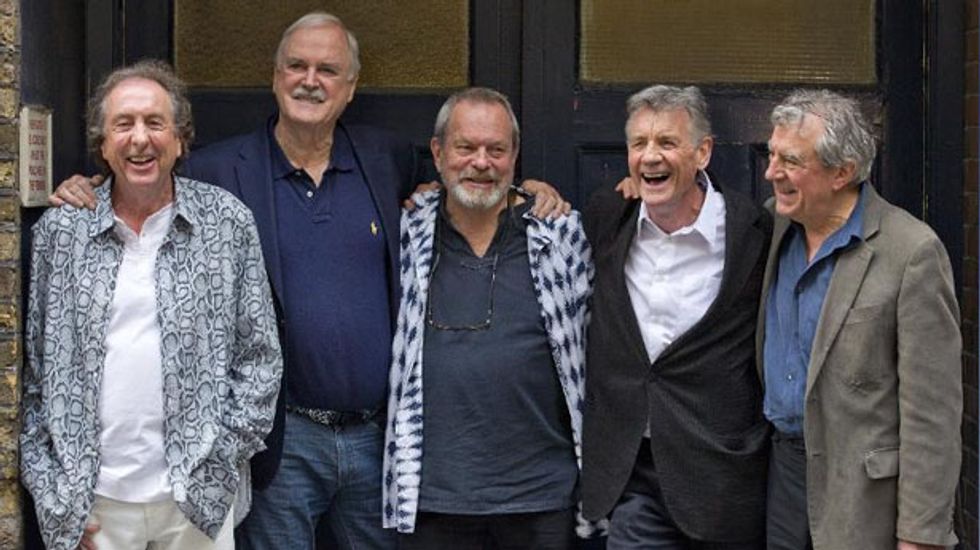 The five surviving members of the group -- John Cleese, Michael Palin, Terry Gilliam, Eric Idle and Terry Jones -- open a 10-night residency at the O2 Arena on Tuesday, their first live performances together since 1980.

The Â£4.5 million ($7.7 million, 5.6 million euros) show will see classic sketches interspersed with big song and dance numbers -- no mean undertaking for men in their seventies.

"I'm quite worn out even after the first number," Palin, 71, told reporters on the eve of the opening night.

Rolling Stones frontman Mick Jagger, who at 70 is still leaping about the stage, filmed a skit for the Pythons in which he feigned surprise that they were still going.

"I mean, who wants to see that again?... A bunch of wrinkly old men trying to relive their youth, and make a load of money," Jagger said, tongue firmly in cheek.

The Pythons' unique brand of physical comedy and brilliantly absurd sketches, shown in the 1970s TV show "Flying Circus" and in the hit films "Life of Brian" and "Holy Grail", earned them a legion of global fans.

More than 14,000 tickets for the first night sold out in just 44 seconds in November and organisers rolled out another nine dates, for which some tickets remain.

The Pythons have promised to perform their greatest hits, including sketches about the dead parrot and the Spanish inquisition, while the wheelchair-bound scientist Hawking will make a cameo in some form.

"Our motto has been 'leave them wanting less'," joked Idle, 71, the brains behind "Spamalot" and the reunion show. "I'm happy and proud to say it's pretty filthy," he added.

The show includes archive footage of Graham Chapman, the sixth Python who died of cancer in 1989 aged just 48, and his absence is marked by its title: "One Down, Five to Go".

The Pythons' return has sparked a frenzy of excitement, but Cleese said he was relaxed about weight of expectation.

"When you get to our age people have bought tickets because they like you," he said, to which Palin cautioned: "They could be assassins, John."

After losing a legal suit lodged by a former colleague over the profits of "Spamalot", a hugely successful musical based on the "Holy Grail" film, the Pythons readily admit money is a driving force behind the reunion.

But they say they enjoy working together again -- even if they are bickering.

Gilliam, 73 and now a top filmmaker, said in a recent interview that he found it "depressing" that they were reforming after almost four decades spent building successful independent careers.

Idle, a 71-year-old writer and director, retorted that Gilliam was "a little arsehole" while Cleese, 74, who played gadgets maestro 'Q' in several Bond films, remarked drily that "Terry finds a lot of life depressing".

The gang showed every sign of getting along on Monday, although they were a little subdued, perhaps worn out by a fortnight of intense rehearsing and the challenge ahead.

The final performance on July 20 will be broadcast live to cinemas around the world, a final farewell to their fans -- and Cleese insists it will really be the last.

"It's much better to do it once really well, in England where it started, and then just leave it at that," he said.

Somehow the United States has managed to develop a fighter jet for all three services — the Air Force, Navy and Marines — that goes for $100 million apiece, ran up almost a half-trillion dollars in total development costs, will cost almost $2 trillion over the life of the plane, and yet it can't be flown safely.