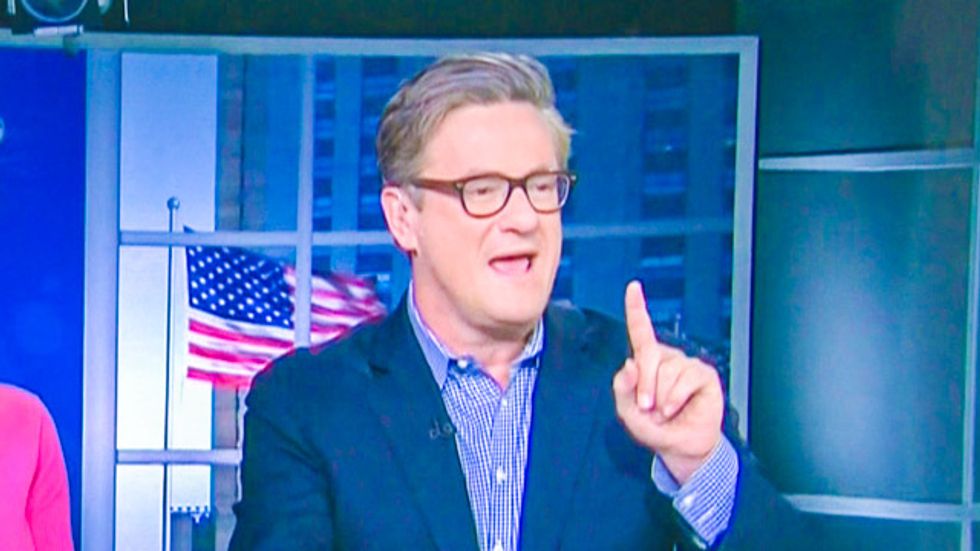 MSNBC host Joe Scarborough, who has a history of attacking people on the Internet for mentioning that a dead intern was found in his congressional offices, said on Tuesday that the Supreme Court should force Google to remove "crap" search results.

On Monday, the Supreme Court agreed to consider the case of a man who was accused of threatening his ex-wife and co-workers on Facebook, but argued his language was not "true threats" because he did not intend to act on them.

Scarborough called the defense "garbage," but then pivoted to discuss non-threatening online comments.

"There is so much crap written online, frightening stuff written about -- well, everybody," he explained.

MSNBC host Thomas Roberts noted that an EU court had recently ruled that Google must remove "inadequate, irrelevant or no longer relevant" data when people request it after a man in Spain sued to have results about his repossessed home removed.

"There are so many outrageous things that are going on," Scarborough agreed. "And I tell you what, I think the biggest thing is, the libel laws, the slander laws, all of those -- I think if people say things online that are damaging or hurtful, I think they need to be sued."

"I think the Supreme Court needs to step in here because it is outrageous, it's out of control," he continued. "It is time for some adults to step in! And this whole idea, 'Hey, it's on the Internet so everything's cool.' No, it's not cool."

With his voice growing louder, the MSNBC host called on the "courts to step up and start holding people accountable, including Google, Yahoo, Bing, and the other servers that allow a lot of this crap to go up top in their search engines."

MSNBC political analyst John Heilemann pointed out that Google considered itself to be more like a newsstand, and less like a newspaper.

"We all think that you can't sue a newsstand for displaying the lies that are in a newspaper," Heilemann explained.

"Their argument is dead wrong!," Scarborough exclaimed. "Because Google is the one that determines what your reputation is by what they put on your page... If people are slandering you and lying about you and spreading lies about you over and over again, and Google keeps feeding that -- especially Google, but also Yahoo and Bing -- they need to be held accountable!

In 2010, Daily Kos founder Markos Moulitsas was effectively banned by MSNBC after he called Scarborough a hypocrite for slamming the media's lack of coverage over a "scandal" involving a Democratic congressman.

"Like story of a certain dead intern," Moulitsas snarked on Twitter, referring to Lori Klausutis, who died in Scarborough's Florida offices in 2001.

"Anyone in media who interviews @markos, know that you're extending your credibility to someone who regularly suggests that I'm a murderer," Scarborough shot back in a tweet.

Although Moulitsas had never explicitly said that the former Florida congressman was a murderer, MSNBC soon sent over a letter explaining that the entire Daily Kos staff had been banned until "the situation can be resolved in a mature fashion."

Google suggests "joe scarborough scandal resignation" as the second most popular alternative search in results for "Joe Scarborough." A web page titled "Did Joe Scarborough Murder A Young Intern" is the third result returned from that Google search.