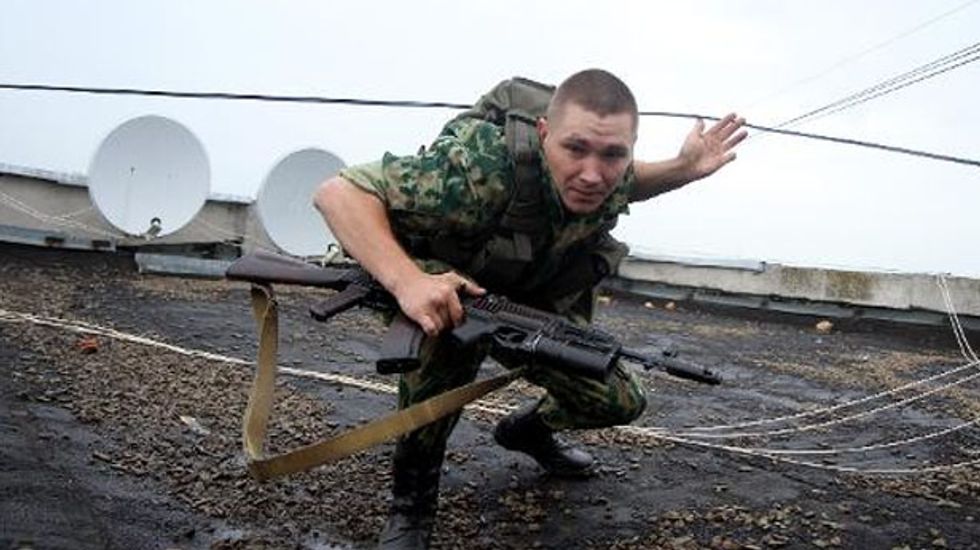 President Barack Obama on Tuesday unveiled a $1 billion US security plan for eastern Europe aimed at allaying fears over a resurgent Kremlin and the escalating pro-Russian uprising in ex-Soviet Ukraine.

Obama launched a major tour of Europe in Warsaw where he will attend celebrations of the 25th anniversary of Poland's first free elections that put both the country and the rest of eastern Europe on a path out of Moscow's orbit and toward democracy and economic prosperity.

But the poignant ceremony has been haunted by those very countries' fears of the Kremlin reasserting its Cold War-era grip over a large swathe of Europe following its seizure of Ukraine's Crimea peninsula in March.

"Our commitment to Poland's security as well as the security of our allies in central and eastern Europe is a cornerstone of our own security and it is sacrosanct," Obama said after inspecting a joint unit of US and Polish F-16 pilots.

Obama proposed an initiative of up to $1 billion to finance extra US troop and military deployments to "new allies" in eastern Europe.

The "European Reassurance Initiative" -- a historic plan that must be approved by Congress -- would also build the capacity of non-NATO states such as Ukraine and Georgia to work with the United States and the Western alliance and build their own defences.

Obama's first pivotal encounter will come Wednesday when he meets Ukraine's embattled president-elect Petro Poroshenko, with his country threatened by civil war and its new pro-Western leadership grasping for protection from Washington.

The seven-week pro-Russian insurgency in Ukraine's eastern rust belt grew only more violent after Poroshenko swept to power in a May 25 presidential ballot on a promise to quickly end fighting and save the nation of 46 million from economic collapse.

Hundreds of separatist gunmen staged one of their biggest offensives to date on Monday by attacking a Ukrainian border guard service camp in the region of Lugansk on the border with Russia.

Ukraine's military reported suffering no fatalities and killing five rebels in a day-long battle that saw insurgents pelt the camp with mortar fire and deploy snipers on rooftops surrounding the base.

But Lugansk's self-declared "prime minister" Vasyl Nikitin told AFP that at least three civilians and the separatist administration's top health official had died in the violence.

A spokesman for Ukraine's "anti-terrorist operation" in the east said one federal soldier was killed and another 13 wounded Tuesday in a new bout of fighting in the neighbouring coal mining province of Donetsk.

Washington's commitment to Ukraine will be reinforced when US Vice President Joe Biden travels to Kiev on Saturday to attend Poroshenko's swearing in as the country's fifth post-Soviet president.

The visit is meant to underscore the US position that the people of Ukraine -- and not Moscow -- should decide their destiny and overcome the cultural differences now tearing apart the vast country's Russified east and more nationalist west.

Kiev has not yet invited any Moscow official to the inauguration and Russian President Vladimir Putin is yet to formally recognise the result of an election that saw rebels disrupt voting across swathes of the east.

Ukraine and its eastern European allies such as Poland have been pushing Washington and EU leaders to unleash painful economic sanctions against entire sectors of Russia's economy for the Kremlin's perceived support of the rebels.

Obama addressed those calls directly by telling a joint press conference with his Polish counterpart Bronislaw Komorowski that Russia faced further punitive measures unless it put more pressure on Ukrainian rebels to halt their insurgency.

"Further Russian provocation will be met with further costs for Russia including, if necessary, additional sanctions," Obama said.

The US president's tour also takes in the Group of Seven summit in Brussels on Thursday that symbolically replaces a Group of Eight meeting that Putin was due to host in Sochi but which world leaders decided to boycott.

But the most sensitive part of Obama's swing will come on Friday when he attends the 70th anniversary commemoration of D-Day in Normandy to which Putin was invited as well.

The US leader has spent months trying to isolate his rival and punish the Kremlin inner circle with sanctions over Ukraine.

Both the Kremlin and White House say no one-on-one meeting between Obama and Putin is being planned.

But senior White House aides have not ruled out an informal encounter -- which would be the first for the rivals since Ukraine mushroomed into Europe's worst security crisis in decades.

Obama also called on Putin to accept Poroshenko's invitation to hold in Normandy his first talks with a Ukrainian leader since the February ouster of Kremlin-backed president Viktor Yanukovych set Kiev on its new westward course.

Ukraine's Poroshenko -- a 48-year-old chocolate baron who once enjoyed good working relations with Moscow while serving as foreign minister -- won a surprise reprieve on Monday when Russia's state gas firm Gazprom delayed a threatened cut in fuel shipments that would also impact large portions of Europe.

Kiev now has until June 9 to start covering its debts -- a period that Russia has promised to use to help reach a long-term price compromise.

But Ukrainian Prime Minister Arseny Yatsenyuk warned on Tuesday that a cut in Russian gas "remains a possibility".