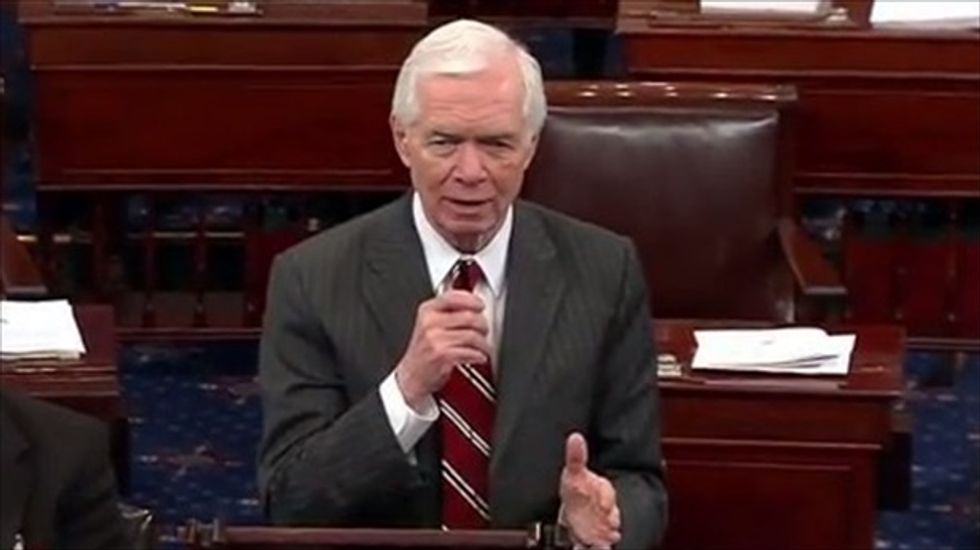 WASHINGTON (Reuters) - Senator Thad Cochran of Mississippi will be fighting for political survival on Tuesday in a Republican primary contest that represents the conservative Tea Party's best chance to knock off a sitting senator this year.

The showdown between Cochran, who is seeking his seventh Senate term, and Tea Party challenger Chris McDaniel highlights a busy day of voting across the country as eight states hold primaries to select nominees for the Nov. 4 midterm elections.

The Mississippi contest gives Tea Party activists, who have lost a series of high-profile primaries this year to Republicans backed by the party's establishment, another chance to show they still have the political clout to upset an incumbent.

The tight race became even more unpredictable in the last two weeks after a local blogger ignited a political furor by entering a nursing home to take a photo of Cochran's wife, who suffers from dementia, and post it on the Internet.

McDaniel denied any connection with the incident, which led to criminal charges against four of his supporters. The two sides accused each other of dirty politics, and the controversy has dominated the race's closing stretch.

"Had enough?" the narrator of a Cochran attack ad on the issue asked. McDaniel responded with an ad saying "nobody said changing Washington D.C. was going to be easy."

During the campaign, McDaniel, 41, had argued Cochran was not conservative enough and it was time for new blood. Cochran, 76, said his experience would benefit the state.

Outside conservative outside groups like the anti-tax Club for Growth and Senate Conservatives Fund spent heavily to help McDaniel, who also gained endorsements from Tea Party favorites such as former Alaska Governor Sarah Palin.

The primary outcome in Mississippi is unlikely to affect control of the U.S. Senate in November, when Republicans need to gain six seats for a majority. Either Cochran or McDaniel will be a heavy favorite against Democratic former Representative Travis Childers in deeply conservative Mississippi.

The Republican Senate primary in hotly contested Iowa, a state that is key to Republican hopes for a majority, features a big field battling for the right to take on Democratic Representative Bruce Braley in November.

State Senator Joni Ernst, who got national attention for an ad featuring her experience at hog castration, is expected to finish first in the primary but needs to win at least 35 percent of the vote to avoid having the nominee decided by a party convention where activists can play a deciding role.

The governor's race leads the primary action in California, where the top two finishers regardless of party meet in November. Democratic Governor Jerry Brown is likely to grab the top spot, while Republicans Neel Kashkari, a former Treasury official who led the department's Troubled Assets Relief Program, and state legislator Tim Donnelly are the prime contenders for second place.