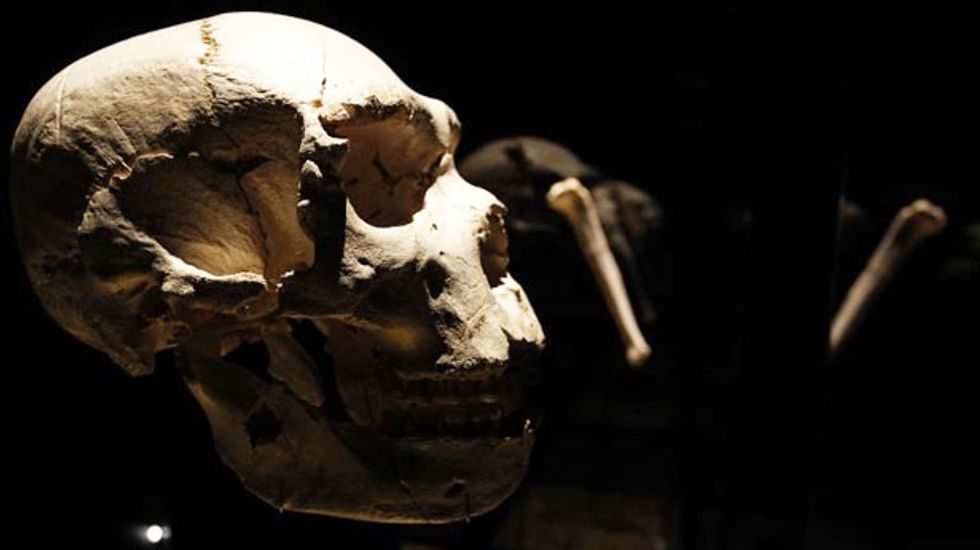 The vicious fight for survival and power among disparate kingdoms and clans may have led some ancient people to evolve facial traits more quickly than others, a study said Thursday.

New research on 17 skulls from a collection of 430,000-year-old remains found at the base of an underground shaft in Spain suggests that big jaws were the first prominent feature of these pre-Neandertals.

Their large mandibles could gnash meat, open wide and be used like a tool or a third hand, helping them adapt to their eating needs in a harsh, cold environment.

The fact that their skulls were compact, suggesting a small brain, indicates that the development of the larger brain seen in Neandertals came later in the evolutionary process, according to the study in the US journal Science.

The group is the largest known discovery of early human remains, including 28 individuals, of whom nearly 7,000 bone fragments have been excavated since the Sima de los Huesos site in the Atapuerca Mountains was uncovered in 1984.

They were young adults when they died, raising a host of questions that have yet to be answered by science: How did they die? How did they get to their resting place at the base of the shaft?

Scientists say they may have been pitched -- ceremoniously or not -- into a pit by their conquerors.

Lead researcher Juan-Luis Arsuaga from the Complutense University of Madrid described their story in terms of "Game of Thrones," a popular fantasy television series based on novels by George R.R. Martin.

"We think that a 'Game of Thrones' scenario probably describes hominin evolution in Eurasia and Africa in the Middle Pleistocene period," he told reporters.

"As in the famous serial, there was never a unified and uniform European Middle Pleistocene kingdom but a number of 'houses,' living in different regions and often competing for land," he added.

Some groupings were closely related, including members of the same extended family, but others were not.

Isolation among clans of early humans, or hominids, meant the long process of adapting their traits to their environment came in fits and starts.

"Human evolution was not a gradual and slow evolution of the whole population at the same rate across the continent," said Arsuaga.

"It is now clear that the full suite of the Neandertal characteristics did not evolve at the same pace."

Arsuaga said they may have been somehow "dethroned" by other hominids.

"They didn't die in a natural or geological catastrophe," he added. "But we think they could have been accumulated by other humans."

Mitochondrial DNA on one of the fragments shows that these people were not Neandertals.

Their remains also date to about 200,000 years before the Neandertals are known to have existed.

"It is possible that they represent a single clan," said Rolf Quam, a paleoanthropologist at Binghamton University in New York.

"They are certainly all the same species. They are within the same biological population, so they are closely related to one another."

More painstaking work to extract DNA may further unravel the circumstances that led to their deaths.

"The origin of this accumulation could be called the biggest mystery in archeology," said Arsuaga.

Furthermore, the skulls will eventually need a new name to more accurately place them in the human family tree, though that matter remains to be settled.

In the meantime, they should no longer be considered, as they once were, to be part of Homo heidelbergensis, the first early humans to live in cold environments.

The remains are also different enough from Neandertals to be considered a separate taxon, the study said.

According to Adam Van Arsdale, an assistant professor of anthropology at Wellesley College who was not involved in the study, the paper's argument that facial changes evolved first "is perfectly acceptable."

He also said the scientists' reluctance to settle on a classification for the remains reflects "one of the most pressing emergent issues in human evolution."

"How do we deal with distinct evolutionary lineages that retain reproductive capabilities with other lineages?" Van Arsdale asked.