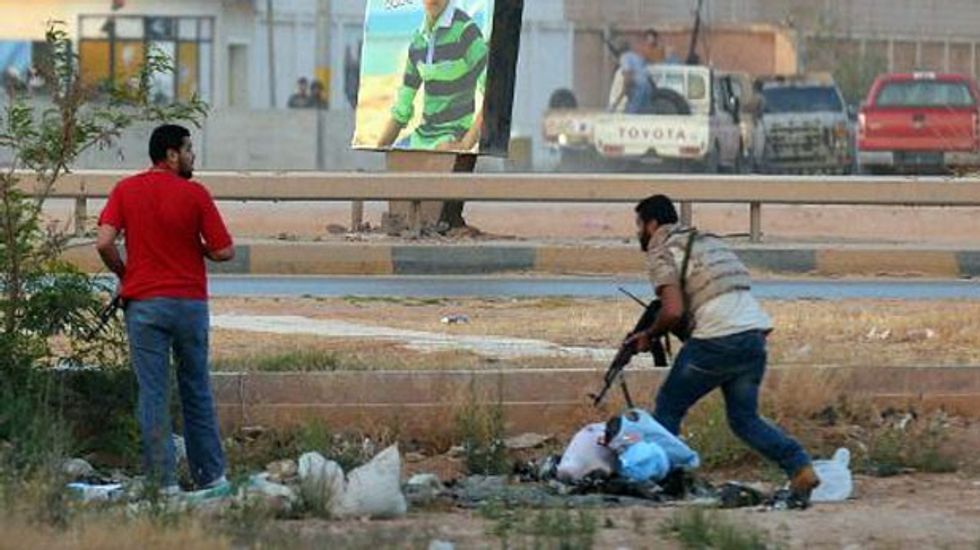 A rogue general, whose repeated deadly assaults on jihadists in Libya's second city Benghazi have earned him threats of reprisal, escaped a suicide bombing Wednesday, one of his commanders said.

But three loyalists of former general and longtime US exile Khalifa Haftar were killed in the attack on a villa outside the eastern city, the commander told AFP.

Benghazi was the cradle of the NATO-backed revolt that toppled longtime dictator Moamer Kadhafi in 2011 but has become a bastion of jihadists accused by Washington of involvement in a deadly assault on the US consulate in 2012.

"A suicide bomber in a vehicle packed with explosives attacked a villa where we had gathered," said General Sagr al-Jerushi, who heads the air wing Haftar has deployed in his attacks on the jihadists.

"Three of our soldiers were killed," Jerushi said, adding he himself had been "lightly wounded".

It is the first attack against Haftar since he launched his offensive, dubbed "Operation Dignity," aimed at eradicating "terrorists" in Benghazi on May 16.

Ansar al-Sharia, a radical Islamist group blacklisted by Washington as a "terrorist organisation" for its alleged role in the 2012 attack on the consulate, has borne the brunt of the offensive and had threatened reprisals.

It warned Haftar he could suffer the same fate as Kadhafi, who was killed by rebels in October 2011.

Al-Qaeda too has threatened the former general. Its North Africa affiliate -- Al-Qaeda in the Islamic Maghreb -- labelled him an "enemy of Islam" on Sunday and urged Libyans to fight him.

Haftar spokesman Mohamed Hejazi was in no doubt who was behind Wednesday's bombing.

"We hold the terrorists responsible for this attack -- this sort of suicide bombing is, of course, the work of terrorists and extremists."

Haftar claims his forces represent the legitimate Libyan army and has won the support of regular army units inside Benghazi, including the special forces, for his offensive against the jihadists.

Their latest assault on Monday left at least 21 people dead and 112 wounded.

But even though Haftar denies any political ambitions, the outgoing Islamist-led parliament in Tripoli accuses him of plotting a coup and has branded him an outlaw.

Since the 2011 uprising, Libya has been awash with heavy weapons and former rebel militias control swathes of territory across the country.

Haftar's campaign against the Islamists has struck a chord among the many Libyans angry at the militias, and there have been repeated street demonstrations in his support in both Benghazi and Tripoli.

But he remains a figure of suspicion for many veterans of the 2011 uprising.

His two decades in exile in United States gave rise to accusations he was linked to the CIA first from the Kadhafi regime, and then from rival rebels.

Washington has denied any role in Haftar's offensive in Benghazi, although its ambassador to Libya has said she would not condemn his efforts to oust Ansar al-Sharia.

"We have not had contact with him recently. We do not condone or support the actions on the ground, and nor have we assisted with these actions," State Department spokeswoman Jen Psaki said on May 20.

During a visit to Washington two days later, US ambassador to Libya Deborah Jones said she "personally... would not come out and condemn" his efforts in going after groups blacklisted by the US.

Ambassador Chris Stevens and three other Americans were killed in the 2012 attack on the consulate, which has prompted persistent criticism of the US administration from its Republican opponents in Congress.