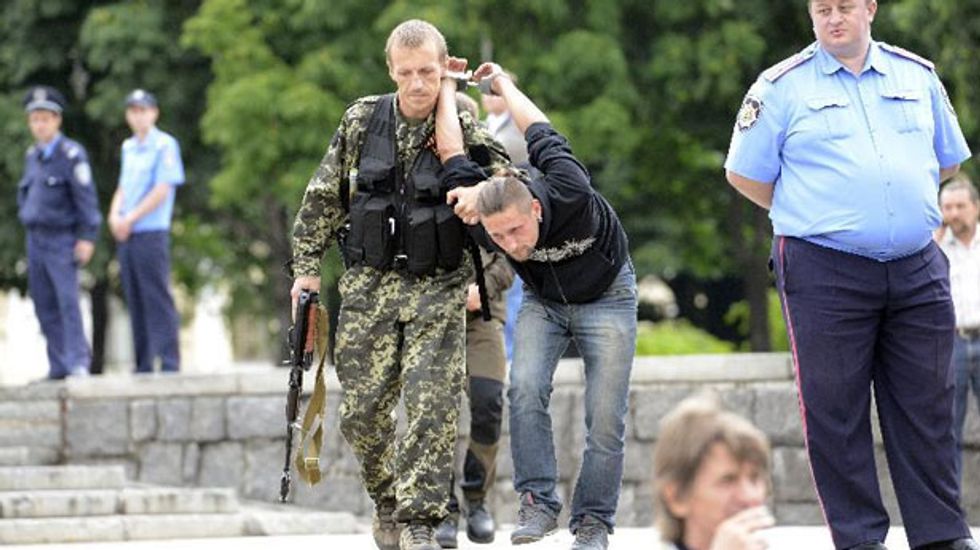 Ukraine's pro-Russian insurgents have agreed to a temporary ceasefire and talks with the new Western-backed president, as US President Barack Obama warned Russia it risks fresh sanctions over its support for the separatists.

The surprise ceasefire announcement from the head of the self-proclaimed Donetsk People's Republic came a day after Russian President Vladimir Putin publicly threw his weight behind Kiev's peace overtures and urged the separatists to halt fire.

Ukraine's security services confirmed on Monday evening that militia strikes in the two heavily-Russified industrial regions that have been at the heart of the insurgency came to an abrupt halt in the late afternoon.

The self-proclaimed prime minister of Donetsk said his side's ceasefire would match the one earlier ordered by President Petro Poroshenko and last until Friday morning.

"In response to the ceasefire declared by Kiev, we pledge to also halt fire on our part. This ceasefire will last until June 27," Oleksandr Borodai told Russia's ITAR-TASS news agency in Donetsk.

"We hope that during the period in which both sides halt fire, we will be able to agree and begin consultations about holding negotiations about a peaceful settlement to the conflict," he told Russian state television in separate comments.

The White House said Obama told Russian President Vladimir Putin by phone on Monday that Russia would face new sanctions if it fails to stop the flow of weapons into Ukraine.

White House spokesman Josh Earnest said Obama used the call to drive home consistent US and Western warnings on Ukraine -- that Russia must stop supporting separatists in the east of the country and halt the flow of weapons across the border.

"Though we believe a diplomatic solution is still possible, Russia will face additional costs if we do not see concrete actions to de-escalate the situation," Earnest stressed.

The Kremlin said only that Putin "stressed that a genuine cessation of fighting and the start of direct talks between the warring sides would have the highest priority for the normalisation of the situation."

While Obama spoke to Putin, US Vice President Joe Biden spoke to Poroshenko for the second time in as many days, and told him Washington would "continue to strongly support" his peace plan.

Meanwhile, US State Department spokeswoman Marie Harf said that Washington had new information that tanks were being readied at a site in southwestern Russia to be sent into eastern Ukraine.

Washington said last week that a number of Russian tanks and armoured personnel carriers had already made the trip across the border.

The rebel's ceasefire announcement delivered a desperately-needed boost to Poroshenko two weeks into a presidency that is scrambling to stamp out both a deadly uprising and an economic meltdown that has been compounded by a cut in Russian gas deliveries last week.

But they also appear to confirm Putin's decisive say in the insurgents' actions -- a point disputed by the Kremlin, and one that appeared in doubt when the two separatist regions declared independence despite being urged by Russia not to do so in May.

Poroshenko has been pressing world leaders to follow through with their threat to unleash devastating economic sanctions against Russia should Putin fail to immediately end his perceived military and diplomatic backing for the insurgency.

The new Kiev leader will also sign a historic EU trade pact on Friday that crowns his May 25 election promise to make the decisive move westward -- one strongly resisted by Russia, and that lies at the heart of the current crisis.

The European Union warned after a meeting of foreign ministers in Luxembourg on Monday that it expected to see action from Putin "within days".

Some analysts believe Putin is still smarting from the sudden loss of an ally in Kiev -- ousted by pro-EU protesters in February -- who could have brought Ukraine into a new alliance of post-Soviet nations being assembled by the Russian leader.

The subsequent flow of heavy weapons and gunmen across the porous border into eastern Ukraine seem to indicate that the Kremlin is -- at the very least -- turning a blind eye to local Russian officials and military commanders' efforts to support the insurgents.

And Putin's order on Saturday for Russian forces from the Volga to western Siberia to conduct snap military drills also suggests that he wants to keep Poroshenko's government unsettled in order to maintain influence in the Russified southeast.

But the Kremlin chief seems equally determined to avoid steps that could trigger broader sanctions and deal a further blow to a Russian economy that is already teetering on the edge of a recession.

The United States said Tuesday it was reviewing the previous administration's withdrawal from the Open Skies Treaty as Russia moved formally to leave the post-Cold War accord meant to build trust.

The United States officially left the pact in November after former president Donald Trump's administration said Russia was violating the agreement that allows the two powers and their allies to monitor one another's airspace.

Writing in The Washington Post this Tuesday, Greg Sargent contends that of all the claims the GOP is making regarding their diminishing support for Wyoming GOP Rep. Liz Cheney, the most "ludicrous" is their claims that she share their vision of becoming a party for the "working class."

"The idea that Republicans must purge Cheney to continue the Trump-driven transformation into a 'working-class party' is a monumental scam. And the debate over unemployment benefits confirms the point," Sargent writes. "Republicans are widely echoing the talking point that the disappointing April jobs numbers are the result of supplemental unemployment benefits in President Biden's American Rescue Plan, which every Republican opposed."