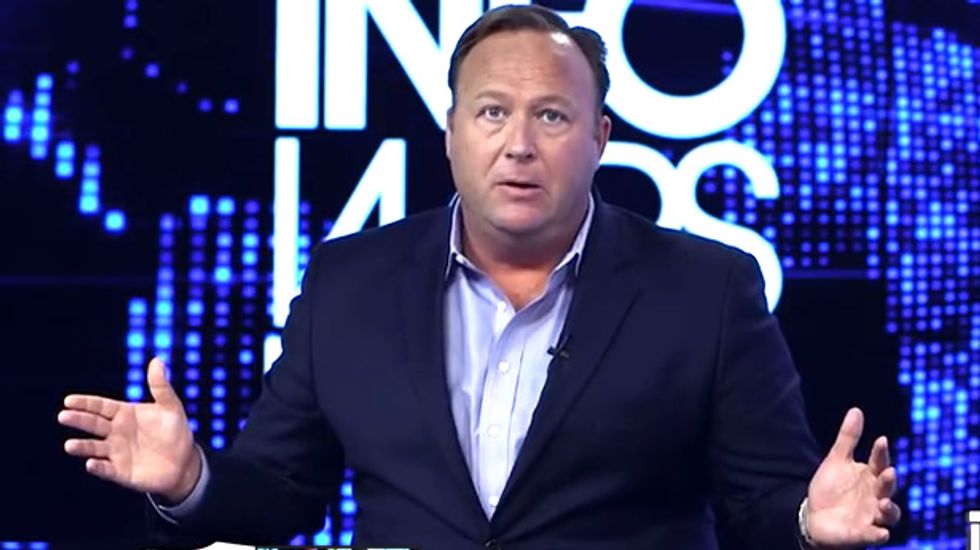 Right-wing radio host Alex Jones posted a report online today in which he urged listeners to seriously consider the truth behind Joan Rivers' statement that Barack Obama is the first gay president because his wife, Michelle, is a "tranny."

"Well, Joan Rivers talked about it the other day, and now it's an international news story," he said. "The question is, 'Who is Michelle Obama? Is she really a woman? Is she a man?'"

"Now, I'm not drawing any conclusions here," Jones continued, "but I know this -- it's fair to question anything and everything this administration says. I can't think of an administration in history that's been caught with such a perfect record of everything they say and do being a lie or a fraud."

"These people are the authors of such tyranny that they shouldn't whine and complain when the public doesn't believe anything they're saying -- especially when every time I look at 'Michelle' or 'Michael' Obama, the First Lady, or First Tranny, something doesn't look right."

"She doesn't look like any black woman I've ever known," Jones said. "She's got shoulders that are wider than a man's, which physiologically doesn't happen. You can put three heads on a man's shoulders, and two heads on a woman's shoulders -- that's a known anatomy."

Jones claimed that the only women he's ever seen with such wide shoulders suffer from a "chromosomal disorder" caused "by all this toxic waste and GMO that's been introduced." He then showed an image of the Wikipedia page for "Klinefelter syndrome, where you are basically part female, part male," before cutting to an image of a printed-out copy of the same Wikipedia page.

People who have this disorder, Jones said, "look just like 'Michelle' Obama."

"For me," he continued, "this really isn't just a laughing matter. It's not just the sexuality, but the very genetics of the human species across the board is being manipulated."

"There's also been a small percentage, a small statistic, of men who identify as females and females who identify as males," Jones added. "And I don't judge that, I'm just sick of the societal obsession with it. It's clearly being pushed, and what I'm tired of is the force-feeding of all of this culturally, to reduce population and break up the family."

After a brief denunciation of political correctness, Jones returned to the topic of state-run sexuality, claiming that Aldous Huxley intended Brave New World to be an instructional manual that his brother, who Jones alleged worked for the United Nations, would use "to end the sexes as we know it, and create biological androids to serve the state."

"So we can make jokes about 'Michelle' Obama having some type of mutation or chromosomal disorder," he said, "but bottom line, this is effecting all of us, and all of our children."

Theories like the one Jones expressed on Wednesday have led some to wonder whether he might be a so-called "false flag."

Watch InfoWars.com's full report on the "controversy" below.