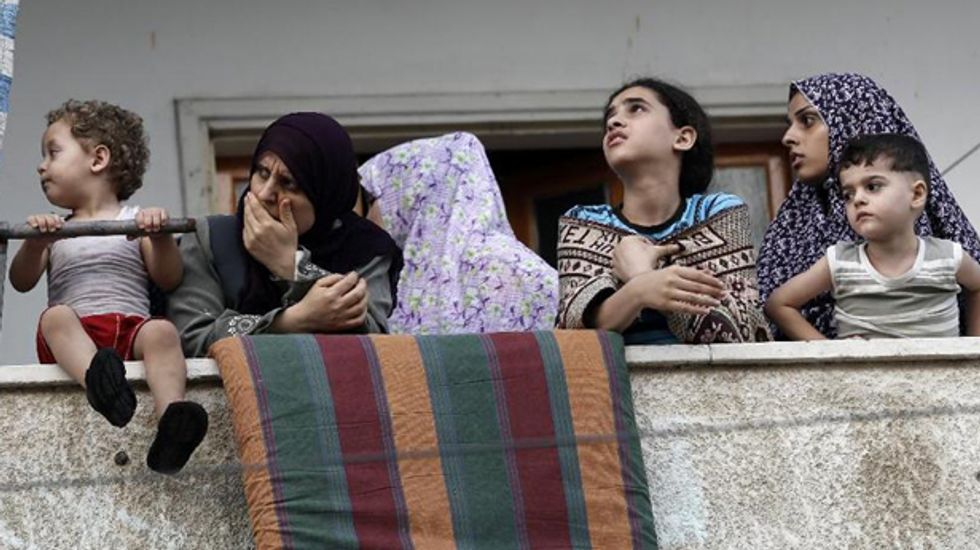 Palestinians appear dazed by level of damage as they check homes, retrieve possessions and search for bodies of relatives

Thousands of people in Gaza have ventured out from homes and shelters during a 12-hour ceasefire to find that whole streets and neighbourhoods have been destroyed in the last week.

Israel and Hamas both agreed to a UN request to stop fighting from 8am until 8pm on Saturday. Shortly before the ceasefire took effect, at least 18 members of the al-Najar family, including many children, were killed in an air strike on Khan Younis, in the south of the Gaza Strip. The family had recently gone there to escape fighting in a nearby village, a Palestinian health official said.

As the Palestinian death toll in the 19-day-long conflict topped 1,000, diplomatic efforts to forge a longer ceasefire continued in Paris. Foreign ministers from seven nations – the US, France, Britain, Italy, Germany, Turkey and Qatar – called for an extension of Saturday's 12-hour humanitarian truce.

The group had convened, along with a senior EU representative, at the request of the US secretary of state, John Kerry, who failed to win Israeli or Hamas backing for a week-long truce on Friday. There were no envoys from Israel, Egypt or the Palestinian Authority.

"All of us call on the parties to extend the military ceasefire that is currently under way," the French foreign minister, Laurent Fabius, said.

In Gaza, scenes of devastation were discovered by those who returned to areas which had been the centre of particularly intense fighting, such as Shujai'iya, Beit Hanoun and around Khan Younis. Scores of homes were pulverised, roads were blocked with wreckage, and power cables dangled in the streets.

Many of those attempting to check the condition of their homes, retrieve possessions and, in some cases, search for the bodies of relatives seemed dazed by what they found. Some who had not seen each other for days embraced as they surveyed the wreckage around them. Ambulances with wailing sirens and donkey carts loaded with mattresses and pots clogged the streets.

In other areas, Palestinians rushed to stock up with food and essentials, and get cash from banks and ATMs, ahead of the Muslim holiday of Eid al-Fitr, which starts on Monday.

In Beit Hanoun, close to the border, Israeli tanks stood by as people searched through the debris for their belongings, packing whatever they could – blankets, furniture and clothes – into taxis, trucks, rickshaws and carts before fleeing the town.

Siham Kafarneh, 37, sat weeping on the steps of a small grocery store. The mother of eight said the home she had spent 10 years saving up for and moved into two months earlier had been destroyed. "Nothing is left. Everything I have is gone," she said.

Some people were defiant. One woman pulled a black-and-white Palestinian scarf from the rubble, shouting: "They won't take away our pride. We'll wear this to Jerusalem and the day of victory is close."

Others were resigned. Zaki al-Masri noted quietly that both his house and that of his son had been destroyed. "The Israelis will withdraw, tomorrow or the day after, and we'll be left in this awful situation as usual."

At the nearby hospital, six patients and 33 medical staff had spent the night huddled in the X-ray department as the neighbourhood was shelled, said the director, Bassam Abu Warda. A tank shell had hit the second floor of the building, leaving a gaping hole, and the facade was peppered with holes from large-calibre bullets.

Two Red Crescent ambulances were hit in Beit Hanoun overnight, killing a medic and wounding three, one critically, according to the International Committee of the Red Cross. On Saturday, rescue workers pulled the scorched body of the medic from the wrecked vehicle, which had been hit about 200 metres from the hospital.

"Targeting ambulances, hospitals and medical workers is a serious violation of the law of war," said Jacques de Maio, head of the ICRC delegation for Israel and the occupied territories.

In areas that had seen intense fighting, 85 bodies were pulled from the rubble, many of them partially decomposed, said Palestinian health official Ashraf al-Kidra. Fighters were also among the dead, said the Gaza Civil Defence spokesman Said al-Saoudi.

Speaking in Cairo on Friday, Kerry said he was confident there was a framework for a ceasefire agreement that would ultimately succeed and that "serious progress" had been made, although there was more work to do.

Kerry, who, along with UN secretary general Ban Ki-moon, has been leading international efforts to reach a truce, has been in regular contact with the foreign ministers of Turkey and Qatar as both countries wield influence on Hamas.

Israel's defence minister, Moshe Ya'alon, said on Friday that the military offensive could expand in the coming days. "At the end of the operation, Hamas will have to think very hard if it is worth it to taunt us in the future."

Israeli troops have so far uncovered 31 tunnels in Gaza and destroyed half of them. Israel considers the tunnels to be a strategic threat because militants have used them to launch surprise attacks inside the country.

The Israeli government has also begun suggesting that Gaza be demilitarised as a condition for a permanent ceasefire so that Hamas cannot rearm itself. The current war is the third in Gaza in just over five years.

Hamas says it will not halt its rocket until it receives international assurances that Gaza's seven-year-old border blockade will be lifted. Israel and Egypt tightened the blockade after Hamas seized Gaza in 2007.

The violence spread to the West Bank and East Jerusalem late this week. Nine Palestinians have been killed as protests over the bloodshed in Gaza have erupted into clashes with Israeli security forces. Hundreds more have been wounded, many with gunshot injuries.

On Thursday night, 10,000 demonstrators marched in solidarity with Gaza near the Palestinian administrative capital of Ramallah. Protesters surged against an Israeli army checkpoint, throwing rocks and Molotov cocktails.

The Palestine Liberation Organisation called for more demonstrations in the West Bank but said it was helping to try to secure a ceasefire deal.

As well as more than 1,000 dead in Gaza, at least 6,000 people have been injured. The UN said more than 160,000 people had sought shelter in its buildings, and thousands more had fled their homes to stay with relatives and friends in what are thought to be safer areas.

The Israel Defence Forces said 37 soldiers had been killed in the conflict. Three Israeli civilians have also died in rocket attacks.