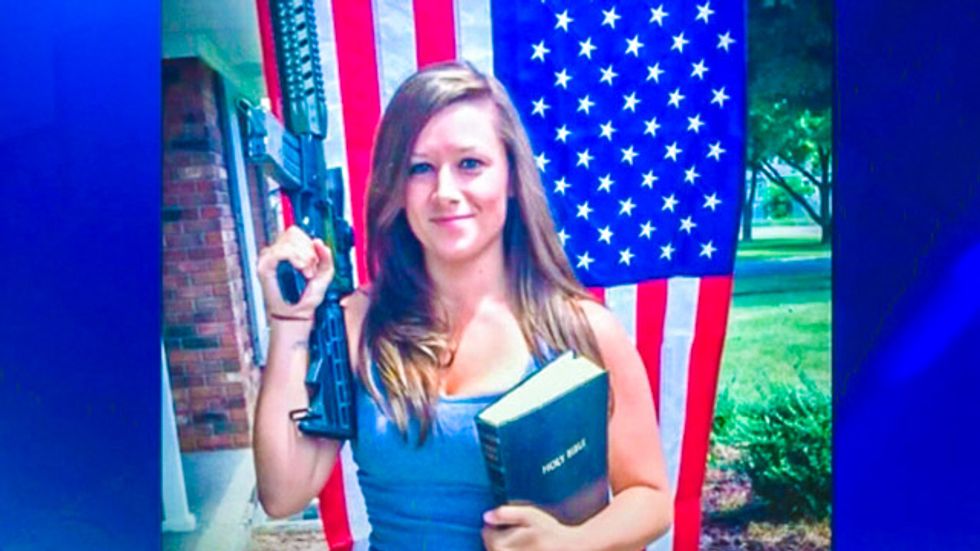 A Hobby Lobby supporter who caused a controversy after publishing a photo that many thought resembled a Palestinian suicide bomber told Fox News on Wednesday that she was displaying "America's founding principles" by posing with an assault-style rifle and a Bible.

In an interview with Fox News, Holly Fischer explained that the idea for her photo came after she posted another photo of herself wearing a shirt opposing abortion rights, holding a Chick-fil-A cup, and standing in front of a Hobby Lobby store.

She said that she posted the Hobby Lobby photo the day that the Supreme Court ruled that some corporations could deny contraception coverage to women, "and a few people were like, 'The only thing missing is your gun or your Bible or your flag.'"

So on the Fourth of July, Fisher posted a second photo of herself stand in front of an American flag, while holding an AR-15 and a Bible.

“ATTENTION LIBERALS: do NOT look at this picture. Your head will most likely explode,” Fisher wrote in a tweet along with the photo.

It wasn't long before commenters on Reddit noticed that Fisher's photo was similar to a photo of a Gaza suicide bomber known as the "White Widow," who was seen holding an assault rifle and a Koran.

"I expected less backlash with this than I did the first one because the picture is, like, America's founding principles," Fischer opined to Fox News on Wednesday. "That's all that's in the picture. And I really didn't think it would cause the uproar that it has."

Fisher said that she posted the photo because there was a "growing intolerance among the left, and conservatives are becoming more and more afraid to speak up."

"I know I'm not going to change any minds of liberals," she admitted. "And I accept that. I understand. Like, I'm not hateful with people who don't agree with me, but I just want people to know that it's okay. Like, you're not alone."