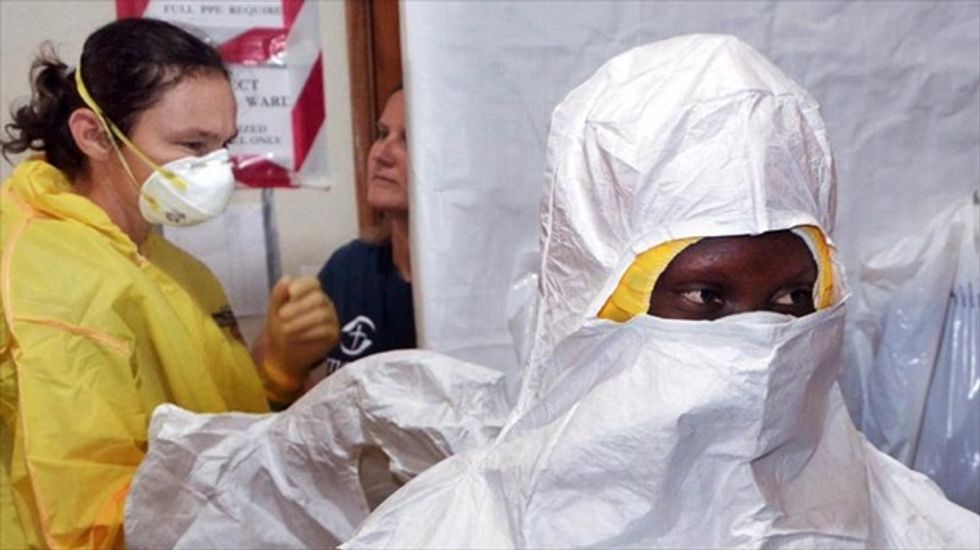 Staff of the Christian charity Samaritan's Purse put on protective gear at a hospital in the Liberian capital Monrovia, July 24, 2014 [AFP]

Monrovia (AFP) - Pan-African airline ASKY suspended all flights to and from the capitals of Liberia and Sierra Leone over the worsening Ebola health crisis, as the Liberian football association said it halted all activities in the country.

The LFA decided "to cease operations of football activities considering that football matches are contact sports and Ebola is spread through body contacts with an infected person", LFA chief Musa Bility said in a statement Tuesday.

Meanwhile the finance ministry in Liberia, where 127 people have died of the disease, said it had placed several senior officials under observation for three weeks after a top ministry official died from the virus.

Patrick Sawyer was on official business in Nigeria last week when he contracted the disease.

"All senior officials coming in direct or indirect contact with Mr Sawyer have been placed on the prescribed 21 days observatory surveillance," the ministry said in a statement.

In Sierra Leone, a doctor in charge of an Ebola treatment centre became another victim of the virus.

Khan was admitted last week into an anti-Ebola treatment facility run by the medical charity Doctors Without Borders (MSF) after testing positive for the virus.

Since March, there have been 1,201 cases of Ebola and 672 deaths in Guinea, Liberia and Sierra Leone, according to the US Centers for Disease Control and Prevention.

Ebola can fell victims within days, causing severe fever and muscle pain, vomiting, diarrhoea and, in some cases, organ failure and unstoppable bleeding.

The LFA's announcement came within hours of a statement by pan-African airline ASKY that it halted all flights to and from Liberia and Sierra Leone.

The move by the Togo-based carrier follows the death of one of its passengers from the virus after they had travelled from Liberia to Nigeria via the Togolese capital Lome.

The 40-year-old man died in Lagos on Friday in Nigeria's first confirmed death from Ebola.

"The suspension of flights to Freetown and Monrovia by ASKY is related to the fight against the spread of the Ebola virus," Afoussath Traore, a spokesman for the company, told AFP.

"ASKY took this precautionary measure to ensure the safety of all: its passengers, staff and people of all countries covered by our network," said Traore.

ASKY, which works in partnership with Ethiopian Airlines, serves 20 destinations in central and west Africa.

The virus hitchhiking across borders for the first time aboard the pan-African airline could spell new flight restrictions aimed at containing outbreaks, the world aviation agency said.

"We will have to act quickly," Benjamin said. "We will consult with the WHO (World Health Organization) to see what types of measures should be put in place" to guard against spreading the disease.

No date, however, has been set for an emergency meeting of both WHO and ICAO officials to discuss possible new protocols.

On its website, ASKY also announced that it would stop transporting food from Conakry in Guinea and would screen all passengers travelling from the Guinean capital.

The highly contagious and often fatal disease spreads among humans via bodily fluids, including sweat, meaning one can get sick from touching an infected person.

With no vaccine, patients believed to have caught the virus must be isolated to prevent further contagion.

In Canada, local media reported Tuesday that a Canadian doctor had put himself in quarantine as a precaution after spending weeks in West Africa treating patients with the virus alongside an American doctor who is now infected.

He has not tested positive, nor shown any symptoms since returning to Canada on Saturday, but one of his American colleagues, doctor Kent Brantly, is being treated for the disease.

"Azaria is symptom-free right now and there is no chance of being contagious with Ebola if you are not exhibiting symptoms," Melissa Strickland, a spokesperson for Samaritan's Purse, told broadcaster CTV.

Brantly, 33, became infected with Ebola while working with patients in the Liberian capital as he helped treat victims.

He "is not doing well. He is still in the early stages of the Ebola infection but having some daily struggles", David McRay, a friend and family medicine doctor in Fort Worth, Texas, told AFP by phone.

"He has requested that I not talk in detail about his symptoms and what he is experiencing, but he is weak and quite ill."