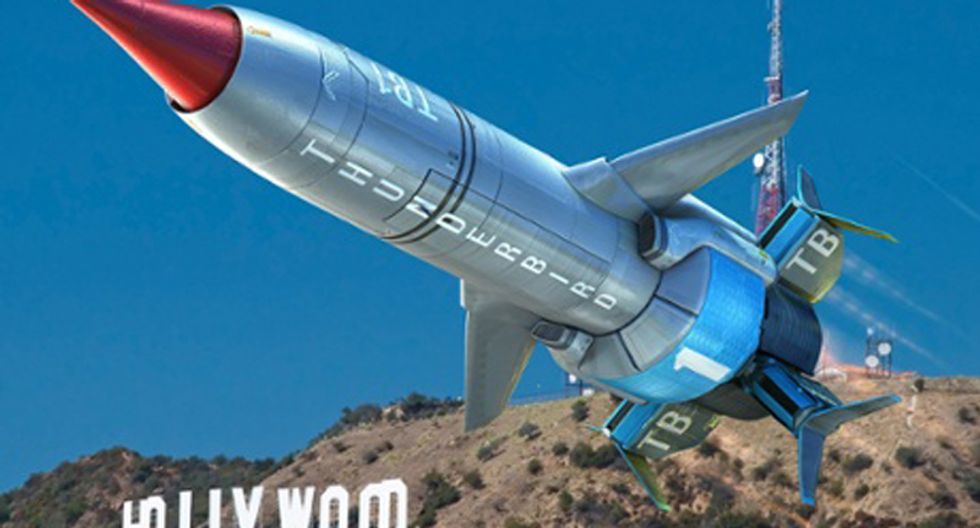 Still from 'Thunderbirds Are Go! (ITN)

No strings attached for new TV series as it debuts in Cannes, blending computer animation with live-action models

The new show will air in 2015 as 26 episodes, with a cast also including Fonejacker’s Kayvan Novak and Game of Thrones’ Thomas Brodie-Sangster, with the original voice of Parker, David Graham, reprising his role.

ITV Studios is working with New Zealand-based Pukeko Pictures and Lord of the Rings special effects studio Weta Workshop on the new series, which will debut exactly 50 years after the original.

“It’s a lament of mine that due to 3D filmmaking and the advent of CGI, miniatures are beginning to be lost from the world,” said Richard Taylor, executive producer and co-owner of Pukeko Pictures and Weta Workshop, before the premiere. “But I knew that I wanted to make a remake of Thunderbirds with miniatures, paying homage to the original show.”

The stakes are high for the new project, after a live-action film in 2003 that received a poor response from critics and fans alike, including Thunderbirds creator Gerry Anderson, who famously described it as “the biggest load of crap I have ever seen in my life”.

ITV Studios’ Giles Ridge, executive producer on Thunderbirds Are Go!, said before the premiere that the company has worked hard to ensure the new series does not meet a similar response.

“One of the biggest challenges of a remake is finding the right balance between refreshing the series for a new audience of children, and keeping the DNA of the original that made it special in the first place. And I really hope that we’ve done that well,” said Ridge.

And have they? Based on the evidence of the episode shown at MIPJunior, even the most sceptical fans of the original show won’t be tempted to describe Thunderbirds Are Go! as crap.

The plot sees the Tracys exploring a disused mine showing a worrying radiation levels, where – and you may want to sit down for this revelation – they get more than they bargained for.

The set pieces are very good: from Thunderbirds 1 and 2 blasting out of Tracy Island and screaming across the ocean to Scott Tracy being whirled around by a killer robot.

The little touches are noticeable too though: some nifty Minority Report-style computer visualisations back at base, with nods to the show’s history – the first “F.A.B.” comes about five minutes in – without feeling overly shackled by it.

Judging by the episode shown in Cannes, the decision to combine computer animation and real model sets has paid off.

If you’re not a fan of the squeakily-clean, shiny CG animation in many modern children’s shows, you’ll appreciate the look of Thunderbirds Are Go! – from the glistening rocks in the mine to the dust clouds kicked up above by the hovering Thunderbird 1.

Not everything was revealed in the premiere, of course: no Lady Penelope or Parker, for example, and only two of the Thunderbirds vehicles. The impact of new characters – Kayo and Colonel Casey are the ones announced so far by ITV – will also have to wait until the show debuts.

Still, the premiere bodes well for the new series. However, the critical audience for Thunderbirds Are Go! isn’t people old enough to remember the original, but the new generation of children its remake is aimed at.

They’ll be able to deliver their verdict in 2015, when the series airs.

Watch video of the classic 'Atlantic Inferno' below: