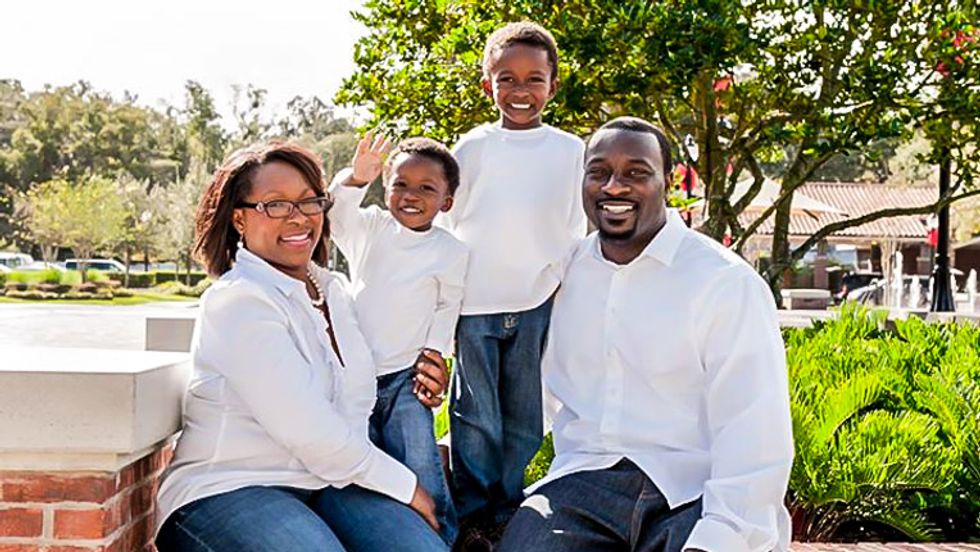 Tiffany Moore Russell with her husband and two children (Facebook)

A local race for Clerk of the Courts in Orlando, Florida turned ugly recently when a supporter for the Republican candidate called in to a radio show to lash out at the Democratic candidate for "having babies" in while she was in office.

During a heated appearance on the Tez Figaro's radio show, Randy Ross argued that Republican Eddie Fernandez should continue to do the job that Gov. Rick Scott (R) appointed him to do following the death of former clerk Lydia Gardner.

Ross, a well-known local activist who works as PR director the Orlando Museum of Art, had supported Democratic candidate Tiffany Moore Russell in the primary, but he said that he would be supporting Fernandez going forward. And according to Orlando Weekly, Ross had been prominently featured on the "Democrats for Eddie Fernandez" Facebook page.

After 15 minutes of arguing about the race on Monday's radio show, Figaro tried to make sure that her support of Russell would be the "last word" on the matter. But Ross refused to let the debate end.

"Well, you know, the reality is, the most of the time Tiffany Moore Russell was in office, she was having babies," Ross charged. "You want to get to the real point? I mean, she hasn't really been that engaged."

"I'm just saying that the most of the time she was in office she was actually having babies," he continued. "You don't want to go there. I like Tiffany Moore Russell. I've embraced her on many occasions. But I'm not sure we want to get into this."

"You just made a comment that was very insulting to women," Figaro pointed out.

"Well, I don't," Figaro shot back. "I never get tired. Best thing about having women and having babies is you don't get tired."

"She's had two children, and went on maternity leave like every other woman," Figaro said.

"Oh, please," Ross sighed. "What I'm saying is you are comparing her record and her work ethic."

"The real problem with Tiffany is something deeper than 'Fernandez is doing a great job,'" Figaro observed after Ross hung up the phone. "And Randy exposed what that is. She was in office having babies. That is a very derogatory comment against women, it's a comment to say that she's not capable of having a child as well as be a county commissioner and an attorney and a wife."

The Orlando Weekly reported that Ross briefly posted a statement on his website apologizing for the remarks, but then quickly took it down.

“On the show, during a heated debate, I made a comment that really wasn’t relevant to the Clerk of Courts race and for that I am apologizing to Commissioner Tiffany Moore Russell," the statement reportedly said. "There are many candidates I support and don’t support…but, in all honesty… I speak for none of them. I will pin this post for a bit and ask that no comments be added as I’m not looking to debate this statement.”

In a statement to Orlando Weekly, Fernandez also distanced himself from Ross.

“While I appreciate all of my supporters, particularly passionate ones, I do not condone comments Randy Ross made on an internet radio regarding my opponent as a working woman," Fernandez said. "Randy is not a campaign surrogate, and does not represent my thoughts about my opponent or working mothers."

Listen to the audio below starting at the 15 minute mark.