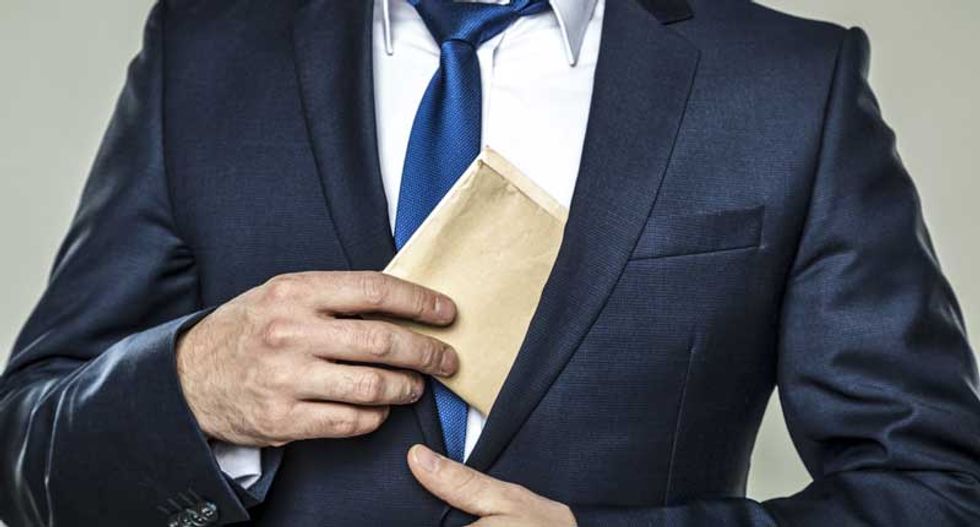 A 10-year veteran Internal Revenue Service (IRS) attorney has demanded a Congressional audit of the IRS to investigate the agency’s alleged role in allowing American corporations to illegally avoid paying billions of dollars in taxes at the same time the agency is cracking down on individuals and small businesses.

In a letter to Treasury Secretary Jacob Lew, IRS commissioner John A. Koskinen, and IRS chief counsel William Wilkins, Jane J. Kim, an attorney in the IRS Office of the Chief Counsel in New York, accused IRS executives of “deliberately” facilitating multi-billion dollar tax giveaways. The letter, dated October 19, will add further pressure on the agency, which is under fire for allegedly targeting conservative and Tea Party groups.

Kim, who has previously blown the whistle on “gross waste of government resources” in the IRS New York field offices, wrote in her new letter that senior IRS officials have “intentionally undermined the authority of the IRS Whistleblower Office" to avoid taking action “in cases involving billions in corporate taxes due.” The IRS also refuses to enforce laws for “large corporate taxpayers,” resulting in giveaways of further billions, despite applying the same laws with “draconian strictness to small business, the self-employed, and wage-earning individuals.”

The IRS attorney’s letter was copied to Jason Foster, chief investigative counsel for the Senate Committee on the Judiciary, as well as several other senators and Congressional representatives, including Elizabeth Warren, Maxine Waters, Alan Grayson, Bernie Sanders, Charles Grassley, Mike Lee, Rand Paul, and Ted Cruz. They could not be reached for comment.

Following coverage of her earlier allegations by Pulitzer Prize winning tax journalist David Cay Johnston, Kim was approached by a private sector lawyer representing corporate whistleblowers to the IRS, who told her that numerous legitimate investigations into corporate tax fraud were being shut down. Her letter sent on Sunday to the US Treasury and IRS described three such cases.

In one case, the IRS was auditing a US company that fraudulently under-reported its profits by nearly $3 billion annually. On behalf of the IRS, the whistleblower had drafted a detailed report proving the fraud, but the agency “closed its audit without ever asking a question or reviewing the documents submitted.” As much as $4 billion in taxes were lost.

In another instance, “a solid case” allegedly involving $6 billion of taxes due was “inexplicably shut down” according to IRS criminal investigation agents. Instead, detailed evidence of fraud and malfeasance “in hundreds to thousands of specific accounts” was ignored. The agent blamed links between senior IRS executives and outside corporations associated with the case.

In the third case, $3 billion of taxes were allegedly uncollected and now accumulate year after year. The American company claimed to the IRS that it earns all profits outside the US, which are then invested overseas, while informing foreign jurisdictions that it earns nothing outside the US. Although US laws tax Americans “on worldwide income,” the IRS simply closed the investigation despite clear evidence of a taxable income.

The private sector lawyer, a former IRS attorney in the Office of the Chief Counsel for over 15 years, said on condition of anonymity that Kim’s allegations are not isolated, but represent a deep-rooted trend: “The problem is the IRS upper management don’t want a big case going forward. They are purposely not working big cases. Employees are quietly encouraged not to expedite them, and to settle or dismiss them. I’ve seen the IRS sit on straightforward billion-dollar cases for years, and then decide not to pursue.”

The IRS Whistleblower Office (WO) was created by Congress in 2006 to encourage leaks of evidence concerning large-scale corporate tax fraud. Once a whistleblower case is proved, resulting in an individual or corporation getting taxed, whistleblowers are to be rewarded with 15 to 30 percent of the total tax paid to the IRS. In 2012, the most recent year with available data, the IRS paid $125 million in whistleblower awards.

According to the private sector lawyer, the Whistleblower Office is being hampered by the agency's attorneys, who are making decisions not to work the bigger cases.

Kim’s letter also highlighted cases exposed by her colleague, IRS attorney Bill Henck, who since 2003 has blown the whistle on IRS concessions to two major corporate energy tax scams for ‘clean’ coal (coal sprayed with the equivalent of “watered down Elmer’s glue”) and ‘black liquor’ biofuel (a byproduct of paper manufacturing with added diesel), resulting in more than $50 billion of unclaimed taxes (not to mention increased fossil fuel emissions).

According to the IRS itself, the US loses $450 billion a year to tax evasion. But the actual sum is probably much higher. “If we factor in the quantity of the cases that are piling up in the WO that no one is looking at, if we consider that the cases I’ve been made aware of are roughly representative of the scale of losses for each case, it could be much higher,” said Jane Kim. A 2008 Senate report on tax havens found that the wealthiest US companies and individuals could be hiding as much as $5 trillion in offshore accounts.

Kim’s letter blamed “a lack of oversight” mechanisms by which Congress can hold the IRS to account. “If the intent of the IRS executive offices was to emasculate the WO, they seem largely to have succeeded,” she wrote. The IRS Office of the Chief Counsel unjustifiably adopted “wide latitude” in “interpreting the laws and regulations… [to] thwart the Office’s effectiveness and mandate.”

Bill Henck, who has worked for over 26 years in the IRS Office of the Chief Counsel, agreed. “The senior executives drive the train on all this and pal around with lobbyists,” he said. “Treasury was involved with both the Elmer’s Glue scam and the black liquor taxability issue. IRS executives look out for themselves, which usually means protecting corporate interests, since they hire lobbyists and are close to politicians.”

According to Henck, this perspective of collusion between the Treasury, IRS, and corporate lobbies, is widely held by IRS employees: “I’ve talked to numerous revenue agents and attorneys within the IRS who believe, like I do, that the agency has hit the skids and that senior executives are dishonest.”

In a detailed account published in February, Henck described how he had “personally witnessed improper giveaways of billions of dollars to taxpayers with inside access at the agency” and “bullying of elderly taxpayers” despite the legal case against them weak. The IRS’ “decision to allow well connected taxpayers improperly to avoid reporting billions in taxable income,” he alleged “was covered up by high level officials.” Ultimately, according to Forbes, the IRS’ mishandling of the black liquor case exposed by Henck “cost the United States $25 billion.”

In 2010, former IRS chief counsel Donald Korb, a George W. Bush appointee, criticized the creation of the Whistleblower Office under his tenure as a “real disaster for the tax system.” Describing it as “unseemly” to encourage Americans to “turn in their neighbors and employers to the IRS,” he complained: “The IRS didn’t ask for these rules; they were forced on it by Congress.”

In Henck’s view, this sort of attitude is symptomatic of a wider culture “including a complete lack of accountability on the part of IRS executives, fear of retaliation on the part of IRS employees, a general lack of integrity, and the influence of lobbyists.”

Backing up Henck’s concerns, the private sector lawyer and ex-IRS attorney explained that since 1998, IRS restructuring has focused on bringing in “outside people.” This led to the employment of an extra layer of executives who were previously “partners from big accounting firms.” Citing active IRS criminal agents, the ex-IRS attorney said: “Almost every large firm or corporation has a person inside the IRS. It’s a revolving door, with the top two or three management layers all from big accounting and law firms, and this is why they won’t work big billion-dollar cases criminally. Private bar attorneys are, in effect, controlling the IRS. It’s a type of corruption – that’s the word used by one IRS agent I’m in touch with whose case was shut down by higher ups without cause.”

The incumbent IRS chief counsel, William Wilkins, was previously a lobbyist at the WilmerHale firm where for 21 years he represented and lobbied on behalf of private sector clients including the Swiss Bankers Association. Swiss banks UBS and Credit Suisse have faced penalties, hearings and convictions for helping wealthy Americans illegally conceal billions of dollars of taxable income.

Attorney James Henry, former chief economist at financial consultancy McKinsey, said that Wilkins’ firm “continued to represent the Swiss Banking Association throughout the 1990s and into the 2000s. Now Wilkins gets appointed chief counsel of the IRS in 2009, and he’s presiding over these whistleblower cases.”

In early 2008, Treasury secretary Jacob Lew was chief operating officer at Citigroup’s alternative investment services unit, where he oversaw the bank’s expanding investments in Cayman Islands tax havens – and even invested in one himself.

Treasury officials refused comment on Kim’s letter, but an IRS spokesperson said: “The IRS cannot comment on specific cases or investigations. However, the IRS strongly supports statutory policies providing for whistleblower rewards where information leads to the collection of additional tax proceeds. The IRS is also committed to pursuing and addressing tax evasion and fraud through all available tools, including information provided by whistleblowers.”

Henck, who still works with the IRS, expressed his bitter disillusionment with the lack of meaningful action. “I’m done with the whistleblowing because no one in authority seems to care,” he said. “The vast majority of IRS employees are honest and conscientious. We used to be the good guys and it is a damn shame that we probably can no longer claim that.”

Nafeez Ahmed is an investigative journalist, bestselling author and international security scholar. A regular contributor to The Guardian on the geopolitics of interconnected environmental, energy and economic crises, he has also written for The Independent, Sydney Morning Herald, The Age, The Scotsman, Foreign Policy, The Atlantic, Quartz, Prospect, New Statesman, Le Monde diplomatique, among many others. He is the author of A User’s Guide to the Crisis of Civilization: And How to Save It (2010), among other books. His debut novel, ZERO POINT, is a science fiction thriller of the near future.