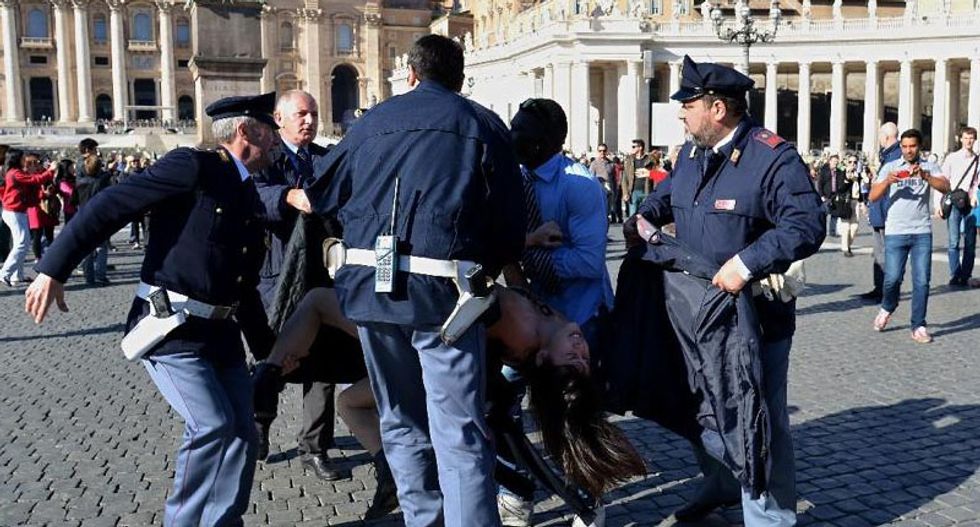 A Femen activist is arrested for an explicit protest at St. Peter's Square in the Vatican, on November 14, 2013 (AFP Photo/Alberto Pizzoli)

Femen, the women's rights group known for topless protests, took their act to a new level of provocation on Friday with an explicitly sexually suggestive demonstration in front of the Vatican.

In what they described as a protest over Pope Francis's upcoming visit to the European Parliament, three members of the group appeared on St Peter's square wearing only leather mini-skirts and flower garlands in their hair.

Two of them had "Keep it Inside" written on their backs - a slogan apparently related to what followed.

Police quickly intervened to drag the women away as bemused onlooking tourists snapped the scene with their smartphones.

It was not immediately clear if the activists would face any criminal charges.

According to the group, the protest was organised because they regard the Pope's November 25 visit to the European Parliament as an attack on secular principles.

"Pope is not a politician," one of the three women had emblazoned across her exposed breasts.