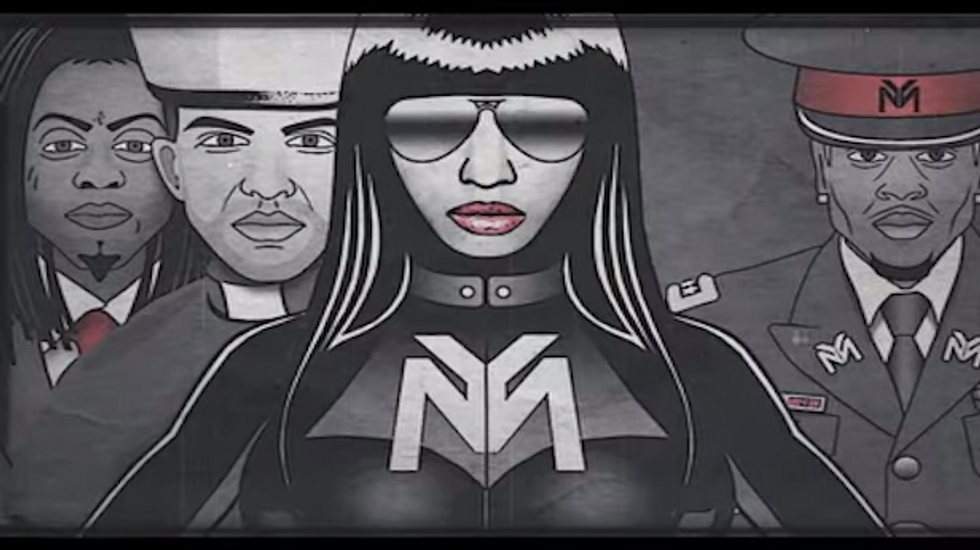 Rapper Nicki Minaj is often in the headlines, but this is the first time it's over accusations of expressing Nazism. The music video for her song Only does indeed include undeniably Nazi imagery, which the director of the video has admitted.

Before getting into what Minaj thinks of Nazism, I thought it would be interesting to imagine how Hitler would respond to a music video featuring his sacred Nazi symbols as well as African Americans (Nicki Minaj, Lil Wayne, Chris Brown), and, even worse, a Black and Jewish American (Drake). The video above, which makes use of the very over-used Downfall meme*,  is what I came up with. Enjoy. And you can watch the video for Only below.

OK, back to the whole director admitting to using Nazi images. Of course that in itself is not a problem. The question isn't the what, but rather the how. The film Sophie's Choice, for instance, has Nazis (the what) in it. But the film's sympathetic protagonist is victimized by the Nazis who are, appropriately, villified in the movie (the how). The documentary Triumph of the Will features Nazis (the what) as well. But in this propaganda film, the Nazis are exalted as heroes (the how). And therein lies the difference. It's  amazing how people don't understand that content is not the same thing as perspective.

The reason I'm not apologizing is because neither I nor the video are anti-semitic. I can't be sorry for something I'm being falsely accused of. The video represents Young Money as a generic totalitarian regime, which takes images and symbols from several countries and time periods, one of which is Nazism...

As far as applying Nazi imagery, 100% me. Whether it was interpreted that way to their team, I have no idea.  Not once did we ever sit in the same room, nor did they ask if I applied a deeper hidden meaning. I simply send them the video and they reject, approve, or ask for changes.

I made this creative decision to show the juxtaposition of the most iconic form of totalitarianism and ways it still exists today, specifically in politics, the military-industrial complex, censorship, and intense monitoring and tracking of our citizens.

The argument starts to fall apart here, though:

It has nothing to do with glorifying Hitler or the Holocaust. People think it's trivializing the Holocaust because the song talks about sex, but I have no control over the lyrical content. I had an opportunity and an outlet, which I knew would reach millions of people, and wanted to make a statement. The term New World Order isn't just an edgy pop culture reference. It is very real and was a term used by president George H.W. Bush, ironically 10 years to the day before 9/11.

I'm all for indicting Bush and exposing the way he and his pals were planning to "regime change" Iraq way before 9/11. But the lyrical content shapes a statement. Clearly Osborne's message would have been undermined by lyrics praising George H.W. Bush.

Minaj, for her part, is playing dumb and playing the some of my best X are Y card. She tweeted:

Both the producer, & person in charge of over seeing the lyric video (one of my best friends & videographer: A. Loucas), happen to be Jewish. I didn't come up w/the concept, but I'm very sorry & take full responsibility if it has offended anyone. I'd never condone Nazism in my art."

also known as “Hitler Finds Out…” or “Hitler Reacts To…” is a series of parody-subtitled videos based on a pinnacle scene from Der Untergang (2004), a German WWII drama revisiting the last ten days of Adolf Hitler’s life and eventual suicide in his Berlin underground bunker. Due to the film’s international success and Bruno Ganz’ haunting portrayal of the Nazi dictator, numerous segments from the movie soon fell fodder to hilarious parodies on YouTube, spawning hundreds of anachronistically subtitled videos of Hitler getting upset over topical events and trivial gossip.