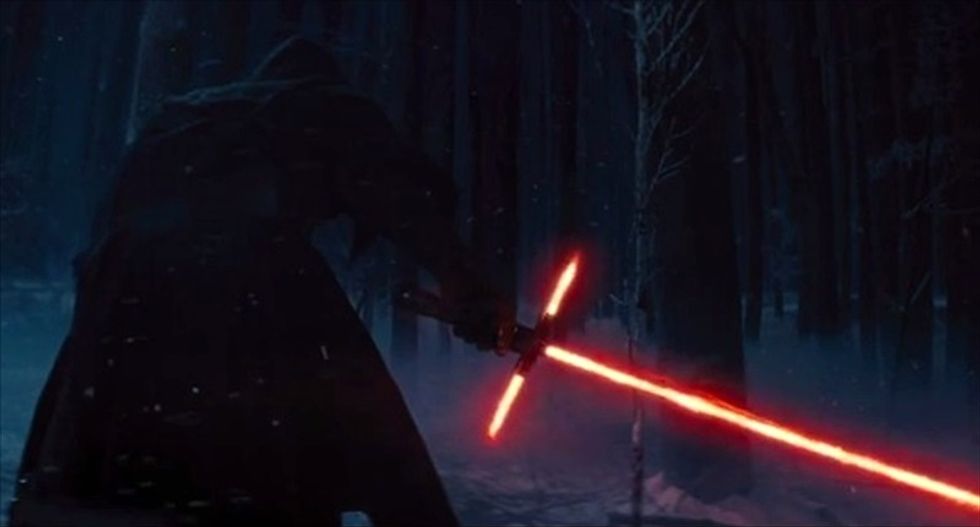 Star Wars fans got their first glimpse Friday of the space saga's long-awaited new film -- including a controversial new-look lightsaber -- but still have to wait a year for the movie itself.

"There has been an awakening. Have you felt it?" a gravel-voiced narrator intones in the brief trailer, before a squadron of Stormtroopers is seen prepping for action.

Studio giant Disney earlier this month revealed the name of the new episode, Star Wars: The Force Awakens, saying filming had been completed on the movie, due in theaters on December 18, 2015.

"The dark side ... and the light," the voiceover continues, as a cloaked figure -- perhaps a dark Sith Lord -- brandishes his lightsaber in a snowy forest, before John Williams' stirring theme plays.

Many seemed split about the new design of the lightsaber, which had flaming laser beams coming out the handle in what looked like some sort of handguard.

"Stupid, stupid, STUPID!!!" said pears009 online. "This 'New' design (is) neither ''COOL' NOR Functional in a fight... YoU’d cut your own FREAKING hand off in a fight with a Tweak of the wrist!!! Uuuuggghhhh!!!"

The seventh movie in the Star Wars franchise, which was launched more than 35 years ago, benefits from far superior visual effects than those seen in the first films, though the original battleships are back.

The Millennium Falcon, the famed spaceship of smuggler Han Solo (Harrison Ford) and his hairy first mate Chewbacca, is seen looping and skimming a planet, preparing for combat with the Empire's TIE fighters.

The X-wing fighters of the Rebel Alliance are also seen.

Star Wars has attracted generations of loyal fans ever since the first film arrived in 1977 recounting the adventures of Luke Skywalker, Solo and Darth Vader.

Filming began in Britain in May on Episode VII.

The new trailer did not include footage of any of the main veteran characters, but did include glimpses of new British cast member John Boyega, clad as a Stormtrooper and racing across a desert landscape.

Fellow Briton Daisy Ridley is also seen riding a new type of speeder vehicle, which one commentator said looks like a giant flash drive with engines attached. There is also a rolling R2D2-like droid.

Filming on the new movie was not without hiccups: in June, the 72-year-old Ford broke his leg on the set when a garage door fell and hit him at Pinewood Studios outside London.

Ford is back as smuggler Solo, the 62-year-old Hamill will return as Jedi Knight Skywalker and Fisher, 57, reprises the role of Princess Leia.

The film is produced by Lucasfilm chief Kathleen Kennedy, Abrams, and Bryan Burk, while multiple Oscar-winner Williams returns as the soundtrack composer.

The original 1977-83 trilogy -- Star Wars, The Empire Strikes Back and Return of the Jedi -- was followed by a prequel trilogy between 1999 and 2005: The Phantom Menace, Attack of the Clones and Revenge of the Sith.

Watch the teaser for "The Force Awakens," as posted online on Friday, below.