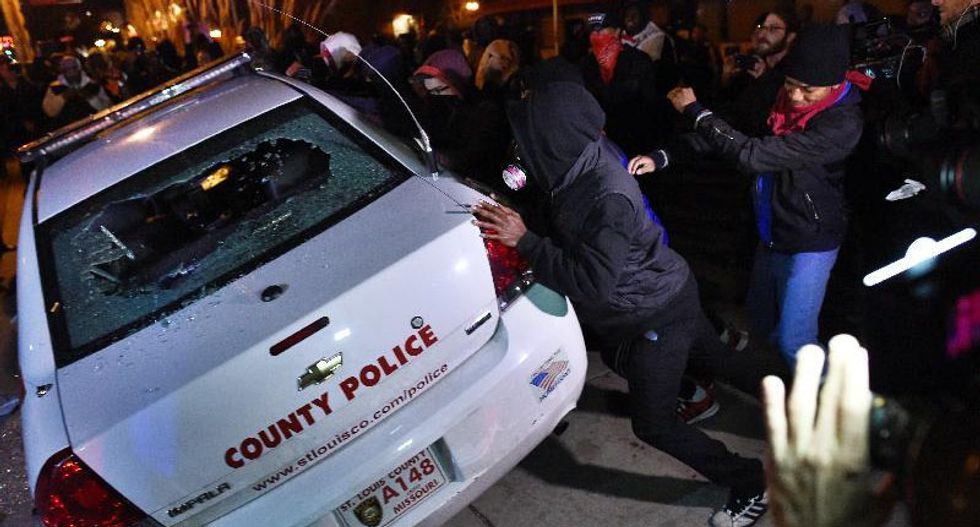 Social tension, police brutality and public disorder – and all of it in the heart of the United States. For the Kremlin and its mouthpieces, who have long accused Washington of outrageous hypocrisy and double standards, unrest in Ferguson, Missouri, come like manna from heaven.

The schadenfreude from official Moscow and pro-Kremlin bloggers has been unmistakeable, and the favoured lens through which to view Ferguson is as a comparison with the Maidan protests in Kiev which began a year ago and ended in February with the overthrow of Ukrainian president Viktor Yanukovych. Events in Ferguson could be the start of “Obama’s Maidan” some Russian tabloids suggested, while others simply claimed there was a double standard in Washington supporting the protesters in Kiev but clamping down on them at home.

Most of all, events in Ferguson gave the opportunity to score points against Washington and take revenge for all the hectoring statements released by the US state department with regards to Russia’s internal politics.

The Russian Foreign Ministry released a statement by its human rights ombudsman, which in content and tone read like a parody of the missives from Washington about Russia’s internal problems.

“The problem of racism in the US has a systemic nature and has the potential to cause serious unrest and splits in society,” read Konstantin Dolgov’s statement. “Attempts to deal with this violently, using military methods against peaceful civilians … are pointless and indeed are likely to further inflame the situation.”

Dolgov’s statements are usually rife with “whataboutism” , the term used to describe the Soviet practice of deflecting criticism with criticism of the opponent’s own flaws. Russia’s English-language television network Russia Today, currently on a major global expansion drive, has made its founding philosophy a kind of whataboutism. Instead of attempting to portray Russia in a positive light, it instead focuses on controversial issues in the west, especially the US. It has covered Ferguson extensively, as have the television channels meant for domestic consumption.

The Russian media was full of dubious puns about a “coloured revolution” in the US, while a headline in the Tvoi Den tabloid screamed “Afro-Maidan”. One sarcastic column in Komsomolskaya Pravda suggested a real revolution in the US was impossible because there is no US Embassy in the US itself, and – after all – everyone knows that all revolutions are planned in and initiated by the US Embassy in a given country.

Dolgov said it was high time that the White House and US authorities stopped poking their nose into the affairs of other countries and got their own house in order: “The recent events in Ferguson are the latest and most worrying sign yet to American authorities that it is finally time for them to focus on the serious internal problems they have with human rights, using the recommendations of international human rights organisations, rather than using their efforts on pointless and fruitless lectures and propagandistic moralising with regards to other countries.”