Fran Lebowitz: When Giuliani was mayor an unarmed black man was killed every 5 minutes 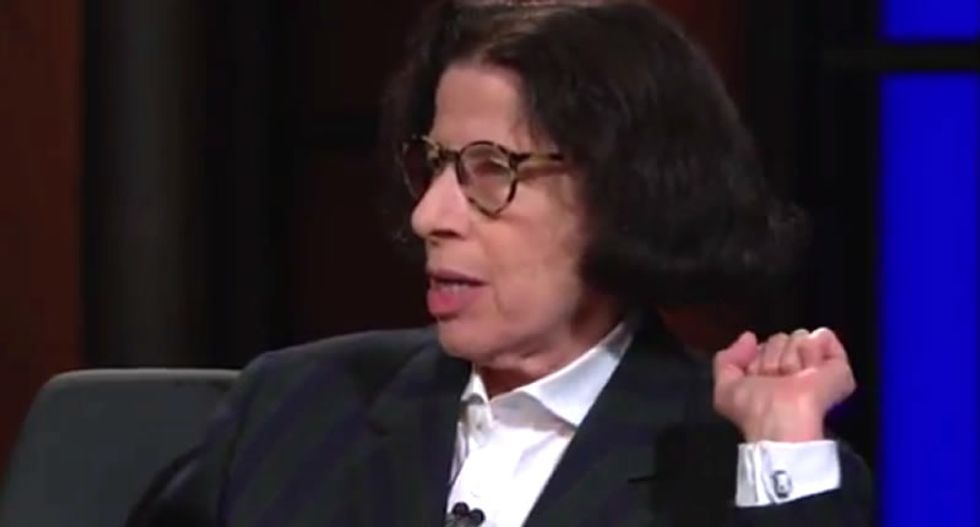 Lebowitz said that when Giuliani ran for mayor of New York City in 1993, his ads said "vote for me and it'll be 1952 again. He is just soaked in nostalgia. That's what he meant when he said Obama doesn't love the country the way we love the county."

"What does it mean," Maher asked, "that Republicans want to go back to an era, the Fifties, where America was run by socialism?"

"You mean economic policy," Lebowitz replied. "The New Deal. That's not the part they miss. They miss -- you know, what is behind Giuliani's comments, and we're not allowed to say this, but it's racism. We now live in a society where it's worse to call someone a racist than to be one."

"And yet they say the most racist things," Maher said. "Ben Stein, last year, said 'Obama is the most racist president we've ever had.' And I thought, even more than the eleven who actually owned slaves?"

"Andrew Jackson killed Indians by hand -- just because they were Indians," he continued. "Ethnic cleansing was just the thing to do."

"What happened to Giuliani? He was the mayor of a liberal city. He used to be a moderate Republican."

"No," Lebowitz interjected, "when Giuliani was the mayor, every five minutes an unarmed black guy was getting shot in the back. It was always a different excuse from the cops -- 'he had something in his hand, I thought it was a gun,' and it was a candy bar. It was a key chain."

Maher then read Giuliani's statement from Friday, in which he said that "what I said wasn't racism, it couldn't be -- because Obama had a white mother, a white grandfather, he went to white schools, and most of what he learned was from whites."

"See," Maher said, "this is what Republicans have against Obama -- he's too white."

After noting that Scott Walker -- who was hosting the event at which Giuliani made these statements -- failed to denounce Giuliani for them, Lebowitz said "of course they didn't, because that's the thing, they agree with it. It's not that they're holding back their criticism -- it's that they have no criticism."

"The problem [conservatives] have," Bill Nye chimed in, "is their primary and the general [election]."

"Yes," Lebowitz replied, "because the lunatics vote in the primaries and Americans vote in the general. That's why we don't have a Republican president."

Maher then pointed out the other thing Giuliani said, that "it's not racism, it's socialism, or possibly anti-colonialism."

"Where are our colonies?" Rob Reiner asked. "We're the colonies! We're against ourselves!"

"Exactly," Maher replied. "Isn't colonialism bad? I thought we were all kind of on that page, and now it's bad to be anti-colonialism? I mean, what was George Washington fighting against?"

"To them," Lebowitz replied.

"My guess is that Giuliani's been out on the speaking circuit," Maher said, "so that's who he's been talking to -- the Republican base. What gets the applause lines? 'Obama's a Kenyan!'"

Watch the entire discussion via RealTime on YouTube below.