Happy Birthday, Ayn Rand! 8 scary quotes from the mother of the Tea Party

Happy 110th birthday, Ayn Rand!  Born Alisa Zinov'yevna Rosenbaum, in Saint Petersburg, Rand wrote The Fountainhead and Atlas Shrugged, founded Objectivism, and helped give rise to the Libertarian and Tea Party movements, though she would certainly be mortified to see some of the people (i.e. all the religious ones) who her attribute their political beliefs to her ideology. To celebrate the guru of selfishness, let us look at scary quotes which range from denouncing altruism as evil to warning against female presidents. 1. It's not that I dislike altruism, it's just that it's evil. During an interview, Mike Wallace said, "You say that you do not like the altruism by which we live." Rand responded by correcting him ever so slightly: "I will say that, 'I don't like' is too weak a word. I consider it evil." 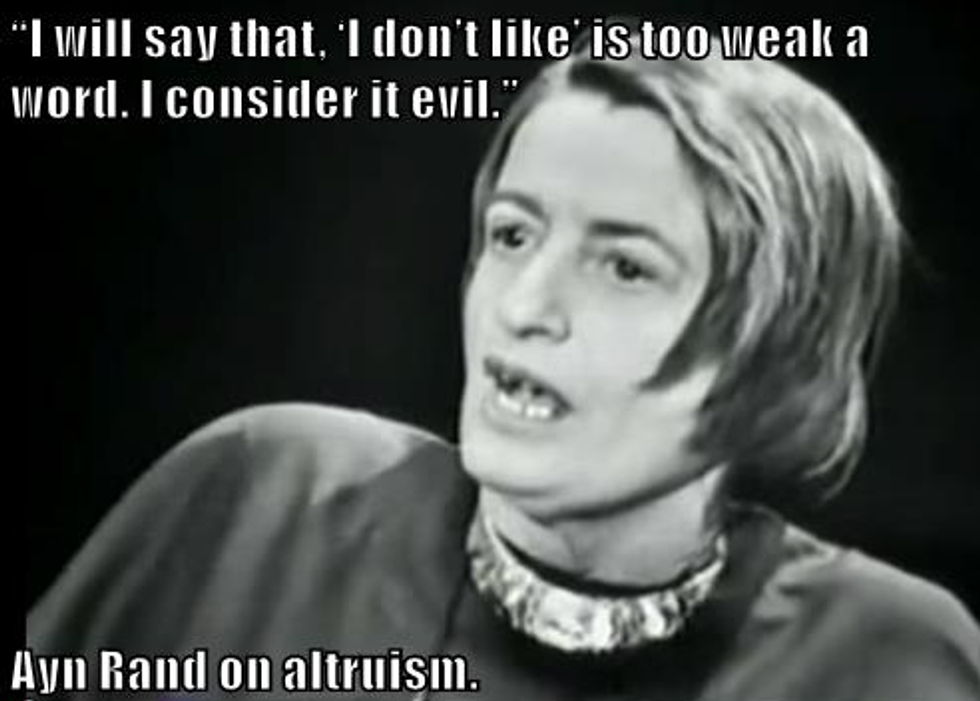 2. Women: can't live with them... and they should never run for president. When a woman in the audience of the Phil Donahue show asked how Rand would feel about a female president, she said, "I wouldn't vote for her. I don't believe that any good woman would want that position." Lest you think this was a spontaneous one-off, Rand put a lot of thought into this issue, writing the essay, "About a Woman President," which read, "For a woman to seek or desire the presidency is, in fact, so terrible a prospect of spiritual self-immolation that the woman who would seek it is psychologically unworthy of the job." 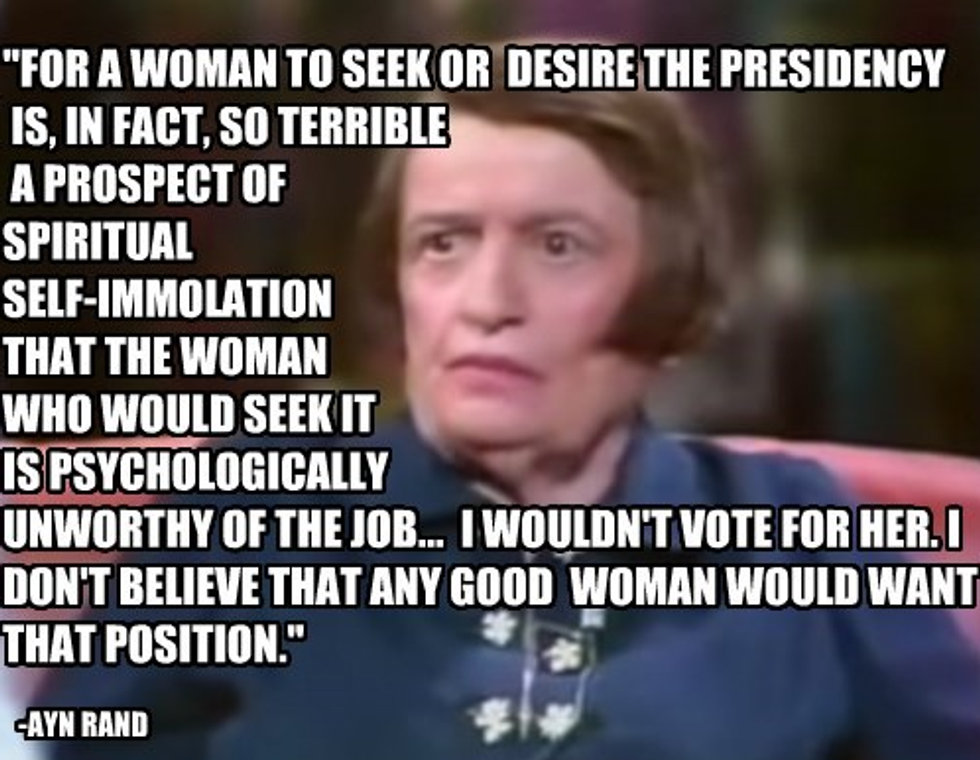 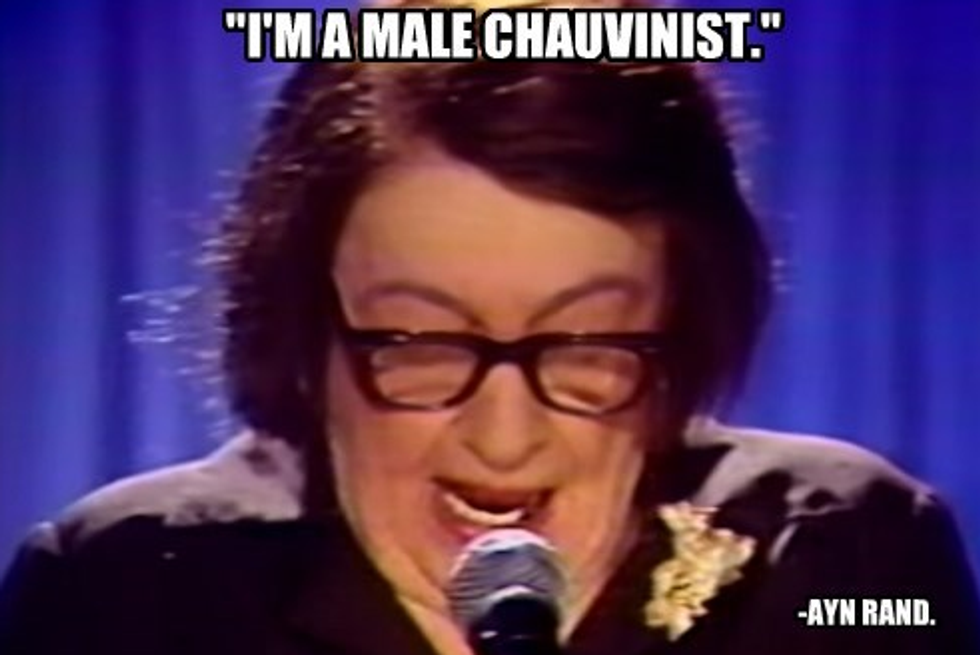 4. Medicare: worse than robbery and murder. In her book The Virtue of Selfishness, Rand has this to say about Medicare:

“Isn’t it desirable that the aged should have medical care in times of illness?” its advocates clamor. Considered out of context, the answer would be: yes, it is desirable. Who would have a reason to say no? And it is at this point that the mental processes of a collectivized brain are cut off; the rest is fog... ... After centuries of civilization, most men—with the exception of criminals—have learned that the above mental attitude is neither practical nor moral in their private lives and may not be applied to the achievement of their private goals. There would be no controversy about the moral character of some young hoodlum who declared: “Isn’t it desirable to have a yacht, to live in a penthouse and to drink champagne?”—and stubbornly refused to consider the fact that he had robbed a bank and killed two guards to achieve that “desirable” goal. There is no moral difference between these two examples; the number of beneficiaries does not change the nature of the action, it merely increases the number of victims.

To be fair, Rand isn't equating Medicare with crime. Medicare is worse:  "the private hoodlum has a slight edge of moral superiority: he has no power to devastate an entire nation and his victims are not legally disarmed." Also, to be fair, Rand was OK enough with Medicare (and Social Security, for that manner) to participate in and benefit from both. 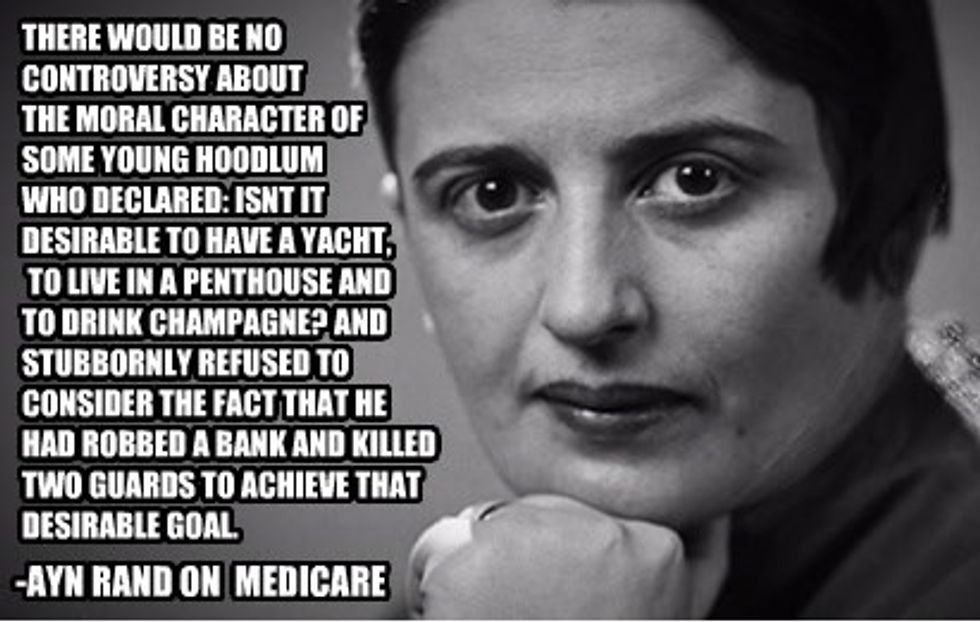 5. Israel may be socialist, but the Arabs are a bunch of savages. See if you can figure out which side of the 1973 Arab-Israeli War the Objectivist was on:

The Arabs are one of the least developed cultures. They are typically nomads. Their culture is primitive... When you have civilized men fighting savages, you support the civilized men, no matter who they are. Israel is a mixed economy inclined toward socialism. But when it comes to the power of the mind—the development of industry in that wasted desert continent—versus savages who don't want to use their minds, then if one cares about the future of civilization, don't wait for the government to do something. Give whatever you can. This is the first time I've contributed to a public cause: helping Israel in an emergency. 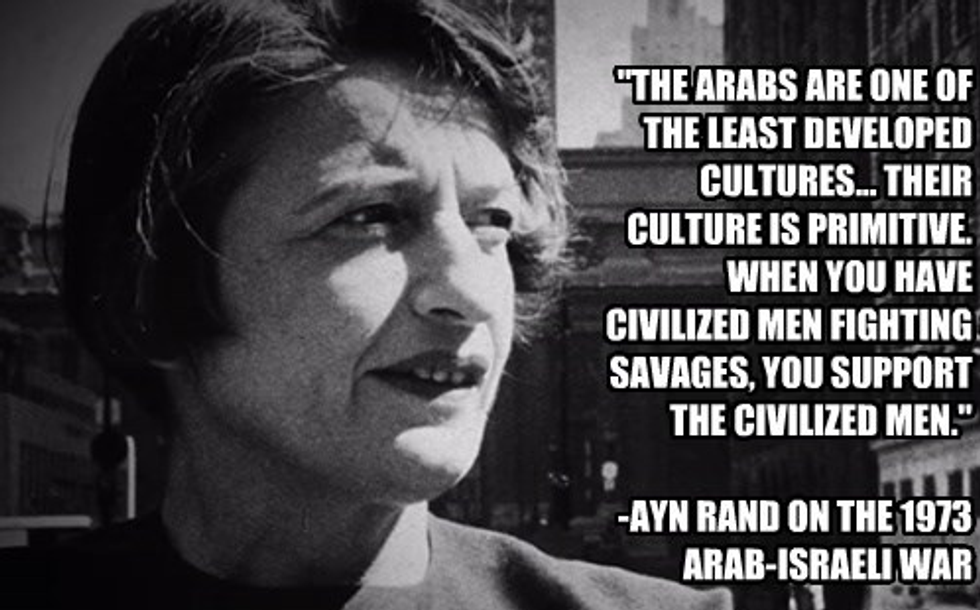 6. White is might is right!  During a Q and A, which followed her Address To The Graduating Class Of The United States Military Academy at West Point, in 1974, Rand dropped this gem:

[The Native Americans] didn't have any rights to the land and there was no reason for anyone to grant them rights which they had not conceived and were not using.... What was it they were fighting for, if they opposed white men on this continent? For their wish to continue a primitive existence, their "right" to keep part of the earth untouched, unused and not even as property, just keep everybody out so that you will live practically like an animal, or maybe a few caves above it. Any white person who brought the element of civilization had the right to take over this continent. 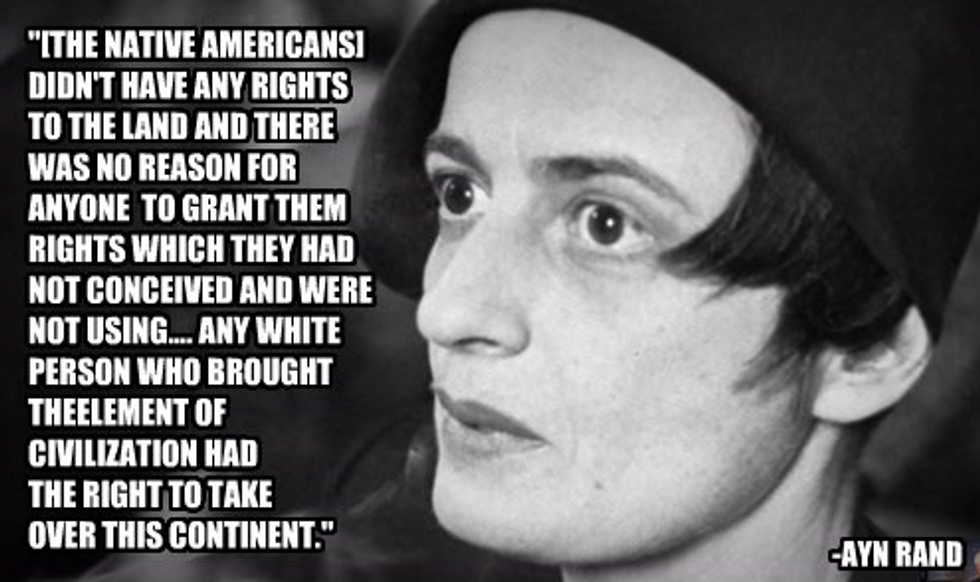 7.  Half-idiot subnormal children are the wooooorst! Rand lamented spending any public money on, 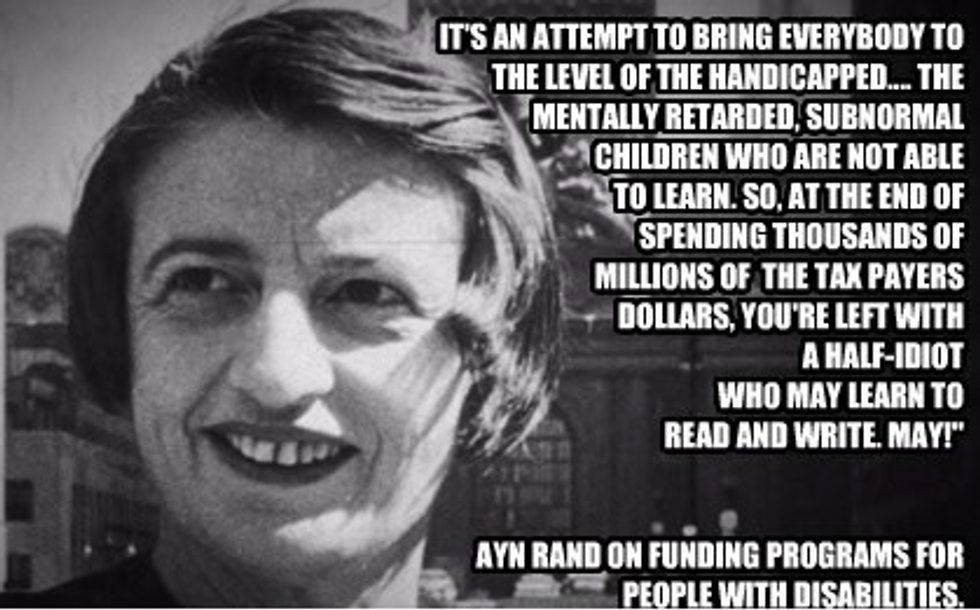 8. (Child) Killer crushes! So, maybe Ayn Rand had a cruel indifference towards intellectually disabled children. But she more than made up for it for having a special place in her heart for William Edward Hickman, a killer who kidnapped, murdered, and dismembered a 12-year-old girl. In her notebook, which was published posthumously, Rand wrote that Hickman embodied,

the amazing picture of a man with no regard whatsoever for all that a society holds sacred, and with a consciousness all his own. He has the true, innate psychology of a Superman.  A man who really stands alone, in action and in soul. … Other people do not exist for him, and he does not see why they should. 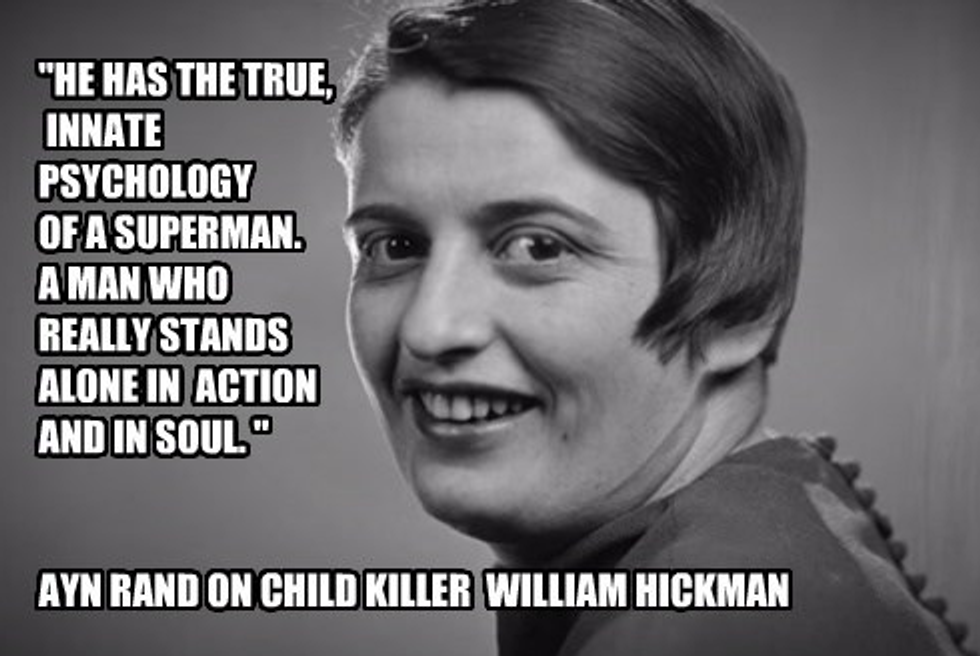 That, ladies and gentleman, is the woman, who many Republicans praise as their moral compass.