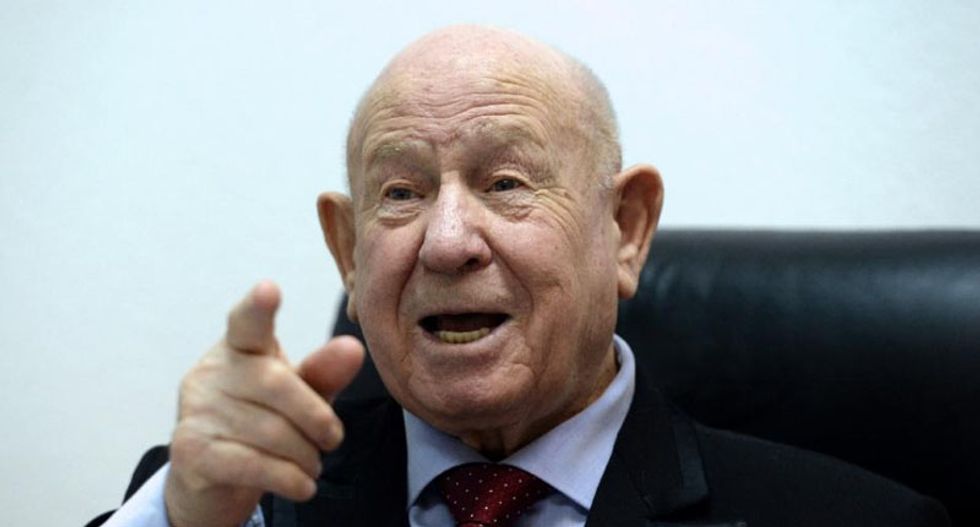 Soviet cosmonaut Alexei Leonov, who was the first man to walk in space on March 18, 1965, gestures during his interview with AFP in Moscow on March 16, 2015 (AFP Photo/Vasily Maximov)

Fifty years after Alexei Leonov carried out the first spacewalk he still vividly recalls the moment he emerged from the capsule to become the only human to have floated in the cosmos.

"I gently pulled myself out and kicked off from the vessel," former cosmonaut Leonov, now a sprightly 80-year-old working for a Moscow bank, told AFP.

"(There was) an inky black, stars everywhere and the sun so bright I could barely stand it."

Tethered to the craft with a five-metre (16-foot) long cord, he gazed in wonder at Earth's geography laid out sweepingly below him, his motherland perfectly visible.

"I filmed the Earth, perfectly round, the Caucasus, Crimea, the Volga. It was beautiful."

The historic moment on March 18, 1965 came as the Soviet Union and United States, Cold War foes on Earth, were locked in a frantic race to conquer space.

With the Americans preparing for their own spacewalk, Leonov and pilot Pavel Belyayev (codenames Almaz-1 and Almaz-2) were rocketed almost 500 kilometres (310 miles) into orbit.

Back on the surface, millions followed the mission as it was beamed live on radio and television.

As the minutes passed outside the spacecraft Leonov heard his pilot report back to Earth: "This is Almaz-1: Man has gone out into space."

Then he heard Yuri Levitan, a famous Soviet radio presenter, saying the same thing. "But who are they talking about?" he thought to himself.

Leonov's 12 minutes in space were the result of years of frantic work as the USSR struggled feverishly to keep ahead of America in the contest for outer space.

In 1962, some 12 months after cosmonaut Yuri Gagarin became the first person to orbit Earth, the Soviets had set themselves a new objective: "Swimming in space like a sailor in the ocean".

Eventually space chief Sergei Korolyov saw in Leonov the qualities he wanted and handpicked the cosmonaut to carry out the historic mission.

"Korolyov chose me because I had already piloted several aircraft, I scored highly and I could paint, which is rare among cosmonauts," smiled the man who would go on to draw sought-after works of art depicting outer space.

After 18 months of intensive training Leonov was finally ready to become the first man to drift through space.

However the Voskhod 2 spacecraft that was to take him there was not.

"The spacecraft had no ejection system," he said. "We would either have to wait nine months to revamp it or use this model. We chose the second option."

But with the Americans hot on their heels -- NASA was hard at work preparing astronaut Ed White for a spacewalk -- there was no time to waste.

"It wasn't about courage. We just knew it had to be done," said Leonov.

But after the initial triumph nearly came disaster.

As he floated in the cosmos, Leonov said the euphoria of making man's first spacewalk quickly gave way to anxiety.

With their orbit quickly taking them away from the sun and into darkness, it was soon time to get back into the vessel, but Leonov realised his spacesuit had inflated and become deformed due to the lack of atmospheric pressure, which could prevent him from slipping back inside the airlock.

Leonov didn't wait to discuss the problem with the control centre, but decided to reduce pressure by bleeding off some of the oxygen in his suit, risking oxygen starvation.

With great difficulty he managed to pull himself into the airlock head first, instead of feet first. The complicated manoeuvres left him drenched in sweat and he lost six kilos (13 pounds) in the 12-minute outing.

But it was only the start of the daunting challenges that awaited them.

Back in the cabin the team realised the automatic guidance system for reentry was not working properly and they would have to manually guide the spacecraft back to Earth.

In his book on the space race, Leonov described in more detail how the landing module failed to separate from the orbital module, creating massive G-forces as they spun wildly around the cable, hurtling towards Earth.

They landed safely but they were 2,000 kilometres from Kazakhstan where they were supposed to end up, in deep snow in a taiga forest in the Ural Mountains, home to wolves and bears.

"We waited three days in the forest to be rescued, and Soviet radio reported we were on holiday after the flight," Leonov said, laughing.

Rescuers lowered a large cauldron in a helicopter to be filled with snow and heated to provide a hot bath for the space adventurers.

Welcomed back as heroes, Leonov and Belyayev completed man's first spacewalk 10 weeks before the United States.

A decade later in 1975 Leonov commanded the Soyuz 19 in the first joint space mission between the Soviet Union and the United States.

As ties between Moscow and Washington have again frayed over the Ukraine conflict, Leonov offered a few solemn words of wisdom.

"There have never been frontiers between astronauts. The day that this notion sinks into the minds of politicians, our planet will be different."

Abortion rights are under attack. But ethics education can help — and defenders of abortion rights should recognize this, before it's too late.