If it's Spring Break, it must be time for Sean Hannity to perv out and slut-shame 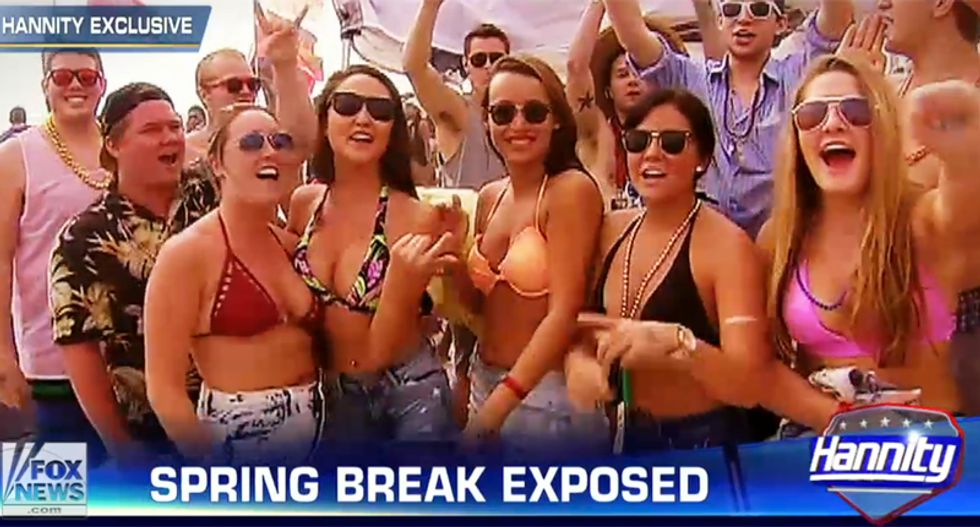 This, of course, means nothing to you if you are not a college student or the parent of children who must be stashed away for a week or the producers of Sean Hannity's nightly Lower Than The Lowest Common Denominator Hour.

Every year college students flock to places like South Padre Island or Daytona Beach to drink, do drugs, have wild and glorious hook-up sex -- all the things we think they're doing in their dorms, but now on the beach for us to gawk at -- and Fox News is there to cover it, providing their nearly-dead audience with a little tingle below the waist that isn't their male catheter slipping out.

This year Hannity sent a Fox blonde -- does it really matter which one? -- once again down to Panama City Beach for a "Hannity Exclusive"  to see if the city fathers made good on their promise to "curb" some of the youthful shenanigans like drug-doing and boob-showing and swear-saying and drink-drinking.

For Hannity things are sadly (not really) still out of control and he was literally forced to show video of drinking and boobie-flashing and drug smoking and butt-twerking and, well, you get the idea. It's all for journalism and set to a pulsing beat.  Just like the sex-having.

Particularly adorable is when the Fox Blonde asked -- not a white guy but a black guy: "When I was at spring break there was underage drinking and alcohol, but I hear it's gotten a lot worse. I hear there's, like, drugs and guns."

As her interviewee walked away saying, "Yeah, I don't know nothing about that," Fox Blonde said, "Come here, what's this? He's smoking marijuana," with a smirk to the part of America that thinks we're we're going to h-e-double-hockeysticks in a handbasket strapped to the front of a Rascal.

It's good to see that Fox didn't stray too far from their roots.

Back in the studio, Hannity and Fox Blonde were very very concerned about the marijuana and the molly and the sex-having and the bad things that these young adults were doing while two-thirds of the screen was devoted to hot bods and twerking.

According to Fox Blonde, when she used to go on spring break, it was just kids drinking -- as a  clip showed black men gawking at white girls coming out of the surf -- and it is now "worse than ever."

Thanks a lot, Obama.

You can watch the "Hannity Exclusive" video below. Perv.