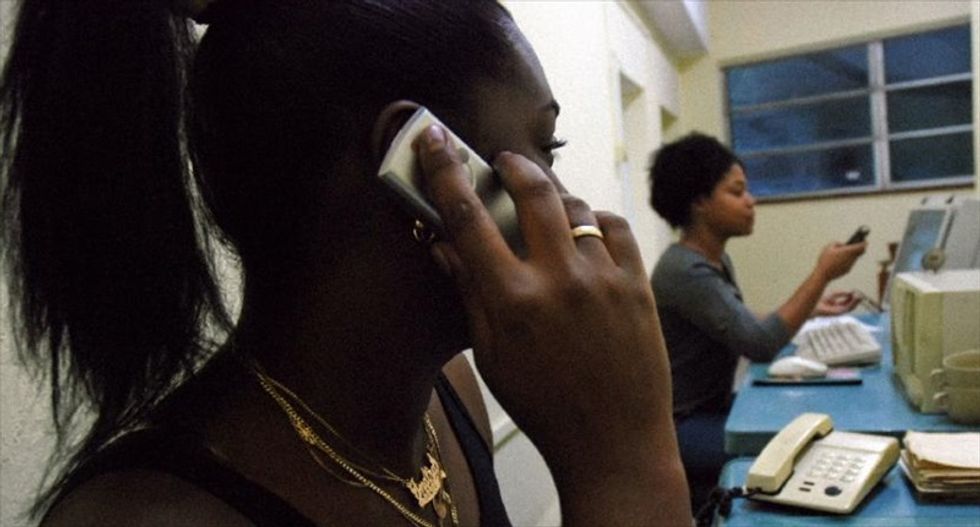 An ETECSA (Cuban Telecommunications Company Inc.) employee talks on a mobile phone on April 14, 2008, in Havana. Photo by Adalberto Roque for Agence France-Presse.

Lawmakers vote to highlight the potential dangers of keeping devices close to the body as scientists raise raft of concerns, especially for children

Berkeley lawmakers voted this week to require cellphone retailers to provide customers with a notice on the potential health hazards of carrying their device too close to their bodies, making the progressive California city the first in the nation to have wireless warnings if the law is allowed to go into effect in July.

Currently, most wireless-capable devices such as smart phones carry FCC-mandated safety recommendations on how close to the skin the devices should be kept. It’s suggested to keep most models at a distance of 5 to 25mm to limit radiation exposure to safe levels.

But those notices are often buried deep inside manuals and online instructions, leaving most consumers unaware they even exist.

A poll of Berkeley residents conducted in April found that while 74% of respondents carried their phones in a pocket – considered close contact – 66% were unaware that cell phone manufacturers recommend the products be carried away from the body or used in conjunction with hands-free devices.

The Berkeley ordinance would require sellers to post the safety information in public view and hand out a separate flyer to buyers who purchase or lease a phone.

“To assure safety, the Federal Government requires that cell phones meet radio frequency (RF) exposure guidelines,” it reads. “If you carry or use your phone in a pants or shirt pocket or tucked into a bra when the phone is ON and connected to a wireless network, you may exceed the federal guidelines for exposure to RF radiation. This potential risk is greater for children. Refer to the instructions in your phone or user manual for information about how to use your phone safely.”

Berkeley’s action comes the same week that emfscientist.org, a group of 190 scientists from 39 countries, released an open letter on the potential dangers of electromagnetic fields and wireless technology, calling for impartial study on the topic from the United Nations and the World Health Organization.

Children and pregnant women might face the highest risks, according to Dr Joel Moskowitz, director of the Center for Family and Community Health at the University of California at Berkeley. Moskowitz both signed the EMF letter and helped craft the Berkeley ordinance. “Five-year-olds absorb at least twice as much radiation (from cellphone contact) as the adult brain,” he said.

But the science around wireless devices remains controversial. CTIA – The Wireless Association, a trade group for the industry, opposed the Berkeley ordinance as pushing inaccurate information on consumers.

“This proposal fails to provide information grounded in science or sound policy, thus misleading consumers and eroding confidence in government,” wrote Gerard Keegan, senior director of external and state affairs for CTIA, in a letter to Berkeley’s city council.

Moskowitz counters that science often requires time to make connections between hazards and health, and that too often studies are commissioned by the industries they affect. “We have seen so many examples of what you could say is interested science turn out to be bad science – tobacco, asbestos, lead,” he says. “The list is endless. Then all of the sudden there is scientific evidence saying it is not safe.”

Moskowitz added that the Berkeley law is specifically crafted to avoid any debate over the actual safety of wireless devices. Instead, it “narrowly” focuses on making buyers aware of the fine print most often fail to read.

“It’s about disclosure, period,” he said. “It’s about trying to get people to see the actual safety information that the cellphone manufacturers put out. The industry has been very successful about hiding or burying these truths and spinning doubt about it.”

That distinction will be critical to defending the new law in court, according to Harvard law professor Lawrence Lessig, one of its authors.

Lessig said that Berkeley waited to pass the law while the fate of a similar proposal in San Francisco was decided in court. In the San Francisco ordinance, retailers would have been required to go beyond the existing warnings included in manufacturers’ materials and add “that there was something dangerous about their cellphone and they should use their cellphone less”, said Lessig.

San Francisco dropped the ordinance after losing a legal challenge by the CTIA. Six other states have also considered some sort of disclosure regulations, but currently, none have passed. Lessig said that if the Berkeley law stand up, “then I do think it will be a model” for other jurisdictions.

The ordinance must have a second reading by the city council on 26 May. If it passes, the new law would go into effect 30 days later, barring legal challenges.

While Berkeley mayor Bates says he anticipates the CTIA “will sue us”, he feels confident “our ordinance that we are proposing is one that will stand up” in court.

“All we are doing is saying a principle about how you should be carrying your cellphone,” said Lessig. “You could think the debate that cellphones are dangerous is complete malarkey but still agree you should not carry your cellphone against your body.”