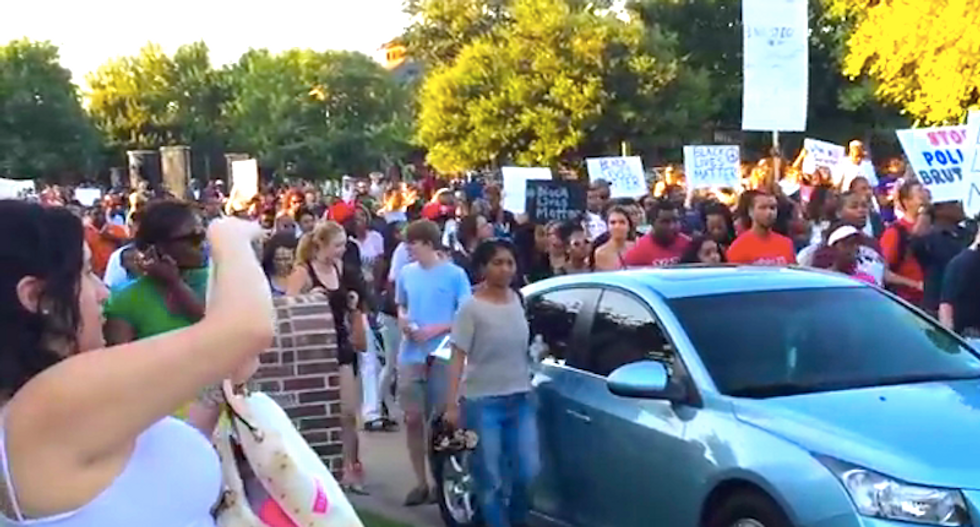 Hundreds marched through the Dallas-area city of McKinney on Monday calling for the firing of a police officer seen in a video throwing a bikini-clad teenage girl to the ground and pointing his pistol at other youths at a pool party disturbance.

McKinney Police Corporal Eric Casebolt has been placed on administrative leave pending an investigation of how he responded to the disturbance on Friday in the city about 30 miles north of Dallas, an incident that has raised fresh questions about racial bias in U.S. policing.

Casebolt, who is white, is seen shouting obscenities at black youths in a multiracial crowd, shoving a black teenage girl, briefly pointing his gun at African-American youths and throwing the girl in her bathing suit, who is black, to the ground, burying his knees in her back.

"We are demanding that the officer be fired and be charged with assaulting the youth," said Dominique Alexander, the president of the Next Generation Action Network, which helped organize the rally.

About 800 people took part in the peaceful rally, carrying signs demanding an end to police brutality and calling for police accountability.

The incident comes after a string of cases over the past year fueled waves of protests across the United States over what civil rights activists say is law enforcement's unjustified use of force, often lethal, against minority groups.

The seven-minute video, viewed more than 7 million times on YouTube as of Monday, shows officers responding to the incident, which police said started when scores of youths attended a party with a disc jockey at a community pool and refused requests to leave.

Civil rights leaders met McKinney officials on Monday and told reporters they saw the officer's actions as being racially motivated. They also said they wanted a U.S. Justice Department probe.

Casebolt, a 10-year veteran once named the department's patrolman of the year, was questioned by authorities on Monday. He has not spoken publicly about the incident.

At the start of the video, one officer cordially tells some teens: "Don’t take off running as soon as cops get here."

Dajerria Becton, the 15-year-old girl thrown to the ground by Casebolt, told broadcaster KDFW the officer twisted her arm and grabbed her by the hair.

"Him getting fired isn’t enough," she said.

Several wrote on the McKinney Police Facebook page that the youths antagonized police and they should have obeyed when officers told them to stay put and keep quiet. A few area residents told media the case was about unruly teens and not about race.

McKinney has about 150,000 people, according to the U.S. Census Bureau. African-Americans make up 10.5 percent of the population and whites about 75 percent.

Watch video of the march posted online by Bad Jesus: