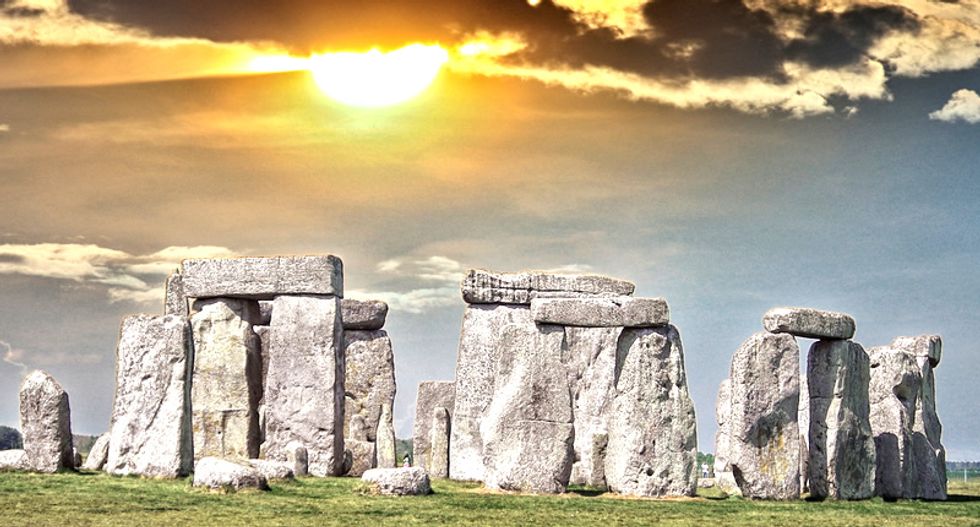 Pieces of flint tools dropped more than 4,300 years ago on the floor of a house as old as Stonehenge have been laid bare on the edge of Marden Henge, a giant ditch and bank enclosure so buried in rich Wiltshire farmland that it has almost vanished from view.

“We’ve over-fetishised Stonehenge for far too long, because those giant trilithons are just so damn impressive,” said Dr Jim Leary, director of this summer’s excavation with the Reading University archaeology summer school, in the lush Vale of Pewsey. “It could well be that this was really where it was at in the Neolithic.”

The rectangular building will welcome visitors next weekend for an open day which is part of the national festival of archaeology . The house, believed to be one of the best preserved from the period ever found in the UK, and made to look smarter with tonnes of white chalk brought from miles away and stamped into a kind of plaster, is as neatly levelled and regular as the nearby postwar bungalows built on top of part of the henge bank.

The house and other parts of the huge site have already produced finds including beautifully worked flint arrowheads and blades, decorated pottery including some pieces with the residue of the last meals cooked in them, shale and copper bracelets and a beautiful little Roman brooch – and the tiny jawbone of a vole. Analysis of the mass of seeds and charred grains recovered will reveal what the people were growing and eating.

The pig bones – probably the remains of at least 13 animals, food for hundreds of people – and the scorch marks from a charcoal firepit, suggest the house was never a permanent residence but connected with great gatherings for feasts. When it was abandoned the entire site, pig bones and all, was cleaned and neatly covered with earth, so it would never be used again.

The structure originally stood on a terrace overlooking a mound, within a small earth banked circle, in turn part of the enormous Marden Henge.

Leary, joined by archaelogy students, professionals and amateurs from all over the world, who will continue working on the site for years to come, is peeling back the layers of a monument that was once one of the biggest and most impressive in Britain, with ramparts three metres high enclosing a vast space, 15 hectares, far larger than the Avebury or Stonehenge circles, and too large for any imaginable practical use.

Leary believes the purpose must have been status, showing off wealth and power in the ability to mobilise a massive workforce: “Avebury had the huge ditches, Stonehenge upped the ante with the massive trilothons, Marden had this enormous enclosure.”

The site is so vast that it takes Leary and fellow director Amanda Clarke 40 minutes to walk from the team working on the house to the diggers who have uncovered a previously unrecorded Roman complex including the foundations of an impressive barn.

Like the Durrington Walls henge a few miles downstream, and Stonehenge itself, Marden was linked to the river Avon by a navigable flow, now a sedge- and nettle-choked stream, which forms one side of the henge.

“Avebury in one direction and Stonehenge in the other have been excavated and studied for centuries because the preservation of the monuments on chalk is so much better. Not nearly enough attention has been paid to the archaeology of the fertile valleys because the land is so good the monuments have often been ploughed out above ground – but it is a key part of understanding the story.”

Marden’s banks, cut through by later roads or lying under modern farm buildings, grazing cows and ripening crops in many places, once stood three metres tall, towering over an equally deep ditch. The outer ring enclosed a complex of smaller monuments, including the Hatfield Barrow, which was once 15 metres tall, and now survives only as a 15cm ripple in the field; it was excavated in 1807, and after a collapse caused by the shaft, later completely levelled by the farmer.

The site welcomes visitors every day, but the open day will have finds on display, tours and activities. It will be among more than 1,000 events across the country over the last fortnight of July, including lectures, site tours and visits to archaeology stores and structures normally closed to the public.