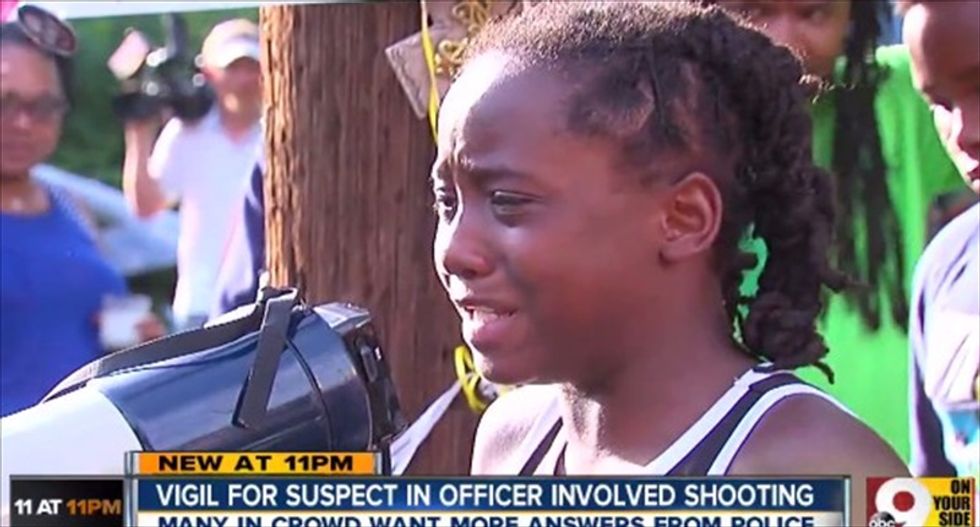 Kimberly Thomas stood in the pouring rain Sunday at the intersection where her brother, Samuel Dubose, was shot dead by police one week prior. The loss of her “biggest fan” has been devastating, just as she was planning to open a new restaurant with Dubose’s assistance.

“They took a community man,” she said. “He was my children’s dad … he taught my children how to be a man. He was an excellent, amazing person.”

Dubose had been urging her “for years” to open a vegan restaurant, Thomas said, an offshoot of her catering business.

She recalled Dubose telling her, “‘You gonna get this restaurant, sis.”

“I was ready,” she said, “and they took my brother way from me.”

“My son was murdered, and I’m not getting no answers,” Samuel’s mother Audrey Dubose said at the start of a protest over Dubose’s death Sunday night.

Hundreds of protesters made their way from the UC police department headquarters through the gentrified university district, before assembling at the intersection of Rice and Valencia, where Dubose died.

Protesters remarked about how several cars along Jefferson Avenue lacked a front license plate: That’s the reason Tensing pulled over Dubose on 19 July.

Around 6.30pm that evening, Tensing spotted Dubose driving near the campus and, about a half-mile away in the historic district of Mount Auburn, pulled him over – outside of UC campus boundaries. (The university has since suspended off-campus traffic stops.)

After Dubose was pulled over, police said he didn’t show his driver’s license, produced a bottle of alcohol and refused to leave his vehicle.

Details of what happened next are scant, as Hamilton County prosecutor Joe Deters has withheld dashcam footage from Tensing’s bodycam, pending the outcome of his investigation, which he expects to be completed Wednesday. A probe by the Cincinnati police department has since completed.

In a 911 dispatch call, Tensing, who is white, said he was “almost run over” by Dubose’s vehicle, before he fired one shot, striking Dubose in the head. He was pronounced dead at the scene.

But the officer’s remark in the call is markedly different from the incident report, which says he was “dragged” by Dubose’s vehicles.

That’s why protesters on Sunday reiterated their call for Deters, the prosecutor, to publicly release the tape before the investigation concludes, saying the lack of footage would answer questions about the apparent inconsistencies that have since surfaced in Tensing’s version of events. And the storyline presented in the official incident report doesn’t comport with Dubose’s character, friends and family said. (The university’s public safety department didn’t respond to several requests by the Guardian for comment by phone and email.)

Dubose was a “sweet, gentle, kind” person, said a woman named Dana who declined to give her last name. Dubose grew up in the same household as her cousin, she said.

“There’s no excuse for what they did,” she said. “Everyone who knew him, loved him.”

A woman standing at her side named Ramona, who also declined to give her last name, echoed the remark, saying Dubose was “a good man.”

She added: ”They picked the wrong one this time.”

‘A linchpin’ for the community

Friends and family described Dubose as a jokester, someone who loved to make them smile whenever possible.

His brother, Aubrey Dubose, said reports have unfairly portrayed Samuel as a criminal and uncaring father. “Sam was a good man,” he said. Samuel has been charged more than 70 times for non-violent crimes, and his license was suspended by the state in January. He also has upwards of 20 children, according to the Cincinnati Enquirer. But that’s irrelevant, his brother said, and incorrectly portrays Dubose in a false light. “The media wants to mention how he has a lot of kids – he knows all his kids,” Audrey Dubose said.

Solomon Oyeyemi said he was a longtime friend through music of Dubose, an emcee who went by the name MC Bezel.

“He was kind of a linchpin for a lot of people in this community,” Oyeyemi told the Guardian.

Dubose played an “integral” role in a local studio, a mainstay for local rappers.

“He helped a lot of people stay out of trouble just by utilizing his studio and his know-how with what he was doing,” Oyeyemi said.

Ivory Watson said Dubose was the “fun, energetic” father of her niece”. She described him as a loving individual, a close relative anyone would be “heartbroken to lose”.

In the immediate aftermath of the incident, university and law enforcement officials quickly hastened to craft a response for the community. Cincinnati mayor John Cranley pledged reform, while UC president Santa Ono said changes were in motion. At a press conference last week, Ono said the university plans to become part of a collaborative agreement established by Cincinnati after the city’s riots in 2001 – which also began after a fatal shooting of an unarmed black man.

The “collaborative agreement” in Cincinnati, which implemented new training and transparency policies focused on community policing, has been touted as a model for police departments across the US and heralded by US attorney general Loretta Lynch.

But some residents and activists at the protest viewed changes as altering the facade rather than implementing real reform.

“When a black man gets shot, the way that they deal with it now is better in terms of how the public perceives it … if someone gets shot there’ll be a community meeting with the cops there the next week explaining everything away,” said Mark Mendoza, a Cincinnati resident. “But it’s them on the podium explaining to us what happened, not us in the community who are losing people we know.”

His wife Jen Mendoza said she doesn’t view the agreement as “groundbreaking”.

“Most people don’t know about it,” she said. “It’s not a real matter of enforcement, which is what we’re lacking every single day.” And while the city has been viewed as a “great beacon for great police community relations,” she said incidents like the shooting of Dubose “have never really gone away.”

“And they terrorize the black community in all sorts of ways,” she said.

The university has sought to quell tensions by initiating several changes to the UC police standards. UC had an agreement in place with the the city of Cincinnati to pull over motorists for low-level driving offenses. That has since changed as part of the fallout from the shooting.

UC police will “focus its patrols within campus boundaries”, the university said in a news release 20 July. “UC police will conduct traffic stops only within the boundaries of UC’s campus.” In addition, a review of the memorandum of understanding with Cincinnati’s police department is forthcoming. The policy dictating how UC officers should use their firearms has also been placed under review. Cincinnati mayor John Cranley said last week “a pullover related to a license plate should not, in the normal course of events lead to lethal force”.

According to the UC police firearms and deadly force policy, obtained by the Guardian through a public records request, an officer “may use deadly force to protect himself or others from what he reasonably believes to be an immediate threat of death or grievous bodily harm”.

The policy continues, “Officers should not discharged a firearm at, or from, a moving vehicle except as the ultimate measure of self-defense or defense of another when the suspect is using deadly force.”

Nik Worstell, a UC student, says he hasn’t had personal interactions with UC officers, but “I feel that’s because as white students we’re not really targets to be seen by police.”

A friend who is a trans woman of color, however, has been harassed by the UC police on campus several times for no reason, he said. “They stop her and want to ask her what she’s doing on campus, but she has every right to be on campus.”

Police relations have improved since 2001, Shannon said to the chorus of some outside chanting “black power” – but only in “certain neighborhoods.” In black communities, he said, “we’re all targets.”

A resident of the neighborhood where Dubose was shot made a similar remark that struck Mark Mendoza on Sunday: “They said we’re still treated like slaves.”

While the incident has sparked a move toward reform at the university, protesters clamored for peace, a state they said could be achieved with the release of video capturing the incident.

Several media outlets have sued to force the release of the footage.

Toward the end of the march, protesters convened at the UC department of public safety’s entrance. Several marched inside, and banged on the lobby window to demand answers – but to no avail. The crowd outside chanted “where’s that tape”.