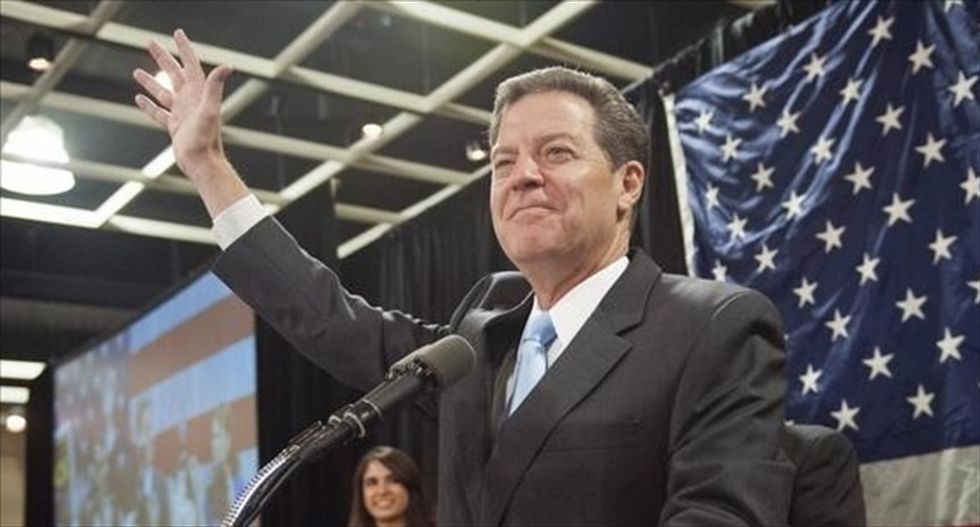 Kansas Gov. Sam Brownback speaks to supporters after winning re-election in the U.S. midterm elections in Topeka, Kansas, on Nov. 4, 2014. Photo by Mark Kauzlarich for Reuters.

Kansas Republican Governor Sam Brownback on Tuesday issued an executive order protecting the religious freedom of clergy and organizations that oppose same-sex marriage as his state moved to implement the law and recognize same-sex healthcare benefits.

The order prohibits Kansas from discriminating against an individual clergy, religious leader or a religious organization that chooses not to participate in a gay marriage based on their beliefs, Brownback said in a statement.

"We ... recognize that religious liberty is at the heart of who we are as Kansans and Americans, and should be protected," he said.

The order comes two weeks after the Supreme Court's ruling that the U.S. Constitution provides same-sex couples the right to marry, a landmark decision that handed a historic triumph to the American gay rights movement.

"While we disagree with the decision of the Supreme Court, it is important that all Kansans be treated with the respect and dignity they deserve," Brownback said.

On Tuesday morning, hours before Brownback's order, Kansas began accepting applications from gay state workers who want to add their same-sex marriage spouses to the state's employee health insurance plan, according to Sara Belfry, spokeswoman for the Kansas Department for Health and Environment.

Kansas also began on Monday allowing same-sex spouses to use their married last names on their driver's licenses, said Jeannine Koranda, spokeswoman of the state's department of revenue.

"It's been a long wait for a lot of people so we are very glad that this day is here," said Tom Witt, executive director of Equality Kansas.

The state is currently reviewing changes it may make to its tax code that would allow a same-sex couple to file a joint tax return and Medicaid eligibility for gay spouses.

Nixon also called for state lawmakers to pass a bill that would prohibit discrimination against gays in employment, housing and public accommodations.

"Same-sex couples now have the right to get married, but here in Missouri, individuals can still be fired for being gay. That's wrong, it's not who we are – and it must change," he said.

(Reporting by Brendan O'Brien in Milwaukee; Editing by Sandra Maler)