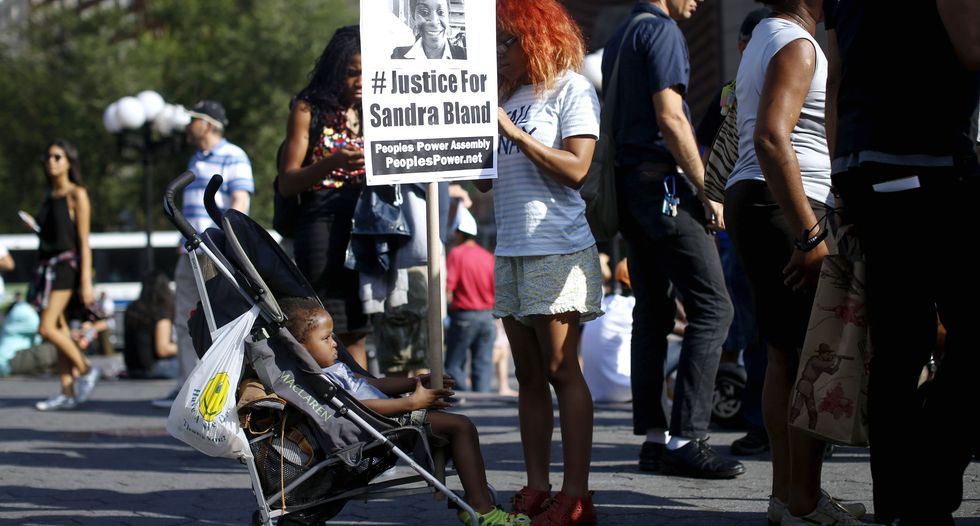 A child holds a sign of Sandra Bland, who died in police custody, during a rally against police violence in New York July 22, 2015. REUTERS/Shannon Stapleton

Sandra Bland, the black woman found hanging dead in a Texas jail days after a traffic stop, smoked or possibly swallowed a large amount of marijuana while in custody, according to her family's attorney.

Waller County District Attorney Elton Mathis made the disclosure in a text message to attorney Cannon Lambert, who has called the state's autopsy on the Chicago-area woman defective, Lambert said.

"Looking at the autopsy results and toxicology, it appears she swallowed a large quantity of marijuana or smoked it in the jail," Mathis said in a text message to Lambert that the attorney disclosed to Reuters.

Reuters could not immediately verify the authenticity of the text. Repeated calls to Mathis' office were not returned.

"This will of course be very relevant in any future criminal or civil litigation," the text message from Mathis to Lambert said.

According to Lambert, Mathis said the state needs to conduct a second autopsy on Bland, whose body was returned to the Chicago area on Wednesday in preparation for a funeral on Saturday.

"The family's confidence is shaken by the continued discrepancies that are surfacing," Lambert said in an email to Reuters.

Waller County Sheriff Glenn Smith, whose office operates the jail where Bland died, could not be reached immediately for comment Thursday on the report of marijuana in her system.

Bland was pulled over on July 10 near Prairie View, Texas, northwest of Houston, for failing to signal a lane change. After the incident escalated into an altercation between her and the trooper, Bland was taken into custody and charged with assaulting an officer. She was found hanging in her jail cell on July 13 with a plastic trash bag around her neck.

Her death was originally ruled a suicide, although officials have said they are handling it as a murder probe.