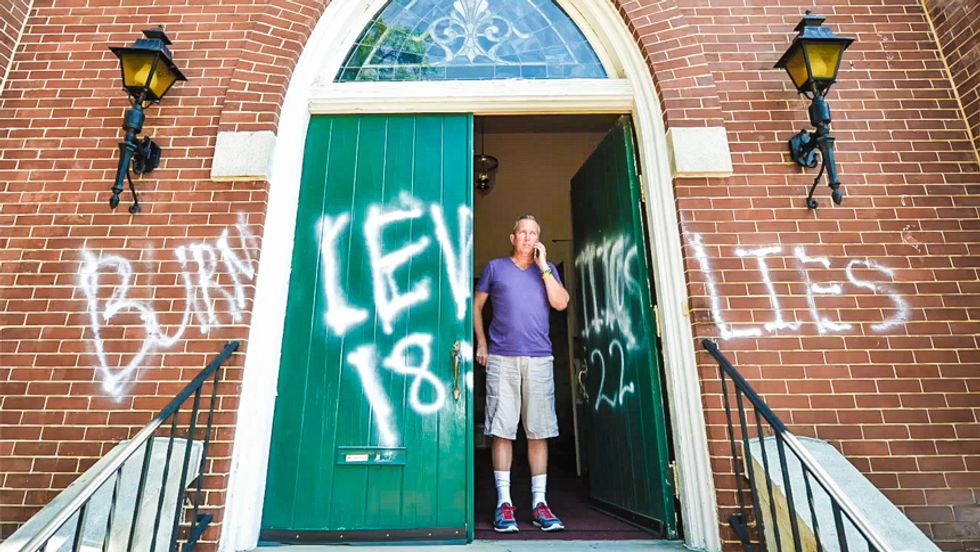 A Georgia church was vandalized with threatening anti-LGBT messages this week after its gay pastor received the first same-sex marriage license in Richmond County.

Rick Sosbe, pastor of Metropolitan Community Church of Our Redeemer in Augusta, told The Augusta Chronicle that he was preparing to go to the church on Tuesday when a member texted him a disturbing photo of the vandalism.

The words “Burn Leviticus 18:22 Lies” were scrawled across the front of the building. Another message pointed to Leviticus 18:20 and warned, "You'll burn." The verses the vandals chose from Leviticus are often cited to argue that the Bible condemns homosexuality as an "abomination" and that LGBT people are worthy of "death."

“I was angry. I was very sad and I thought, ‘Just why?’ To me, it seems so interesting that they’re saying on there that you’ll burn – in other words saying ‘You’ll burn in hell,’ I’m sure – and quoting scripture. Is that what Christianity – right-wing, fundamentalist Christianity – has come to?” Sosbe observed.

Just weeks ago, a rainbow flag was also stolen from the church after Sosbe and his partner became the first gay couple in the county to receive a same-sex marriage license.

“We’ve occupied this building for 12 years, and this is the first (time) something’s happened,” the pastor pointed out.

An incident report filed by the Richmond County Sheriff’s Office estimated damages to the church at $2,500. Although investigators could not recover any fingerprints from the dried paint, Sosbe said that the church was prepared to prosecute.

About 50 supporters rallied in front of the church on Tuesday evening. Augusta Pride Vice President Lonzo Smith spoke about the need for hate crimes legislation in Georgia to protect LGBT people.

Watch the video below from The Augusta Chronicle, broadcast July 21, 2015.