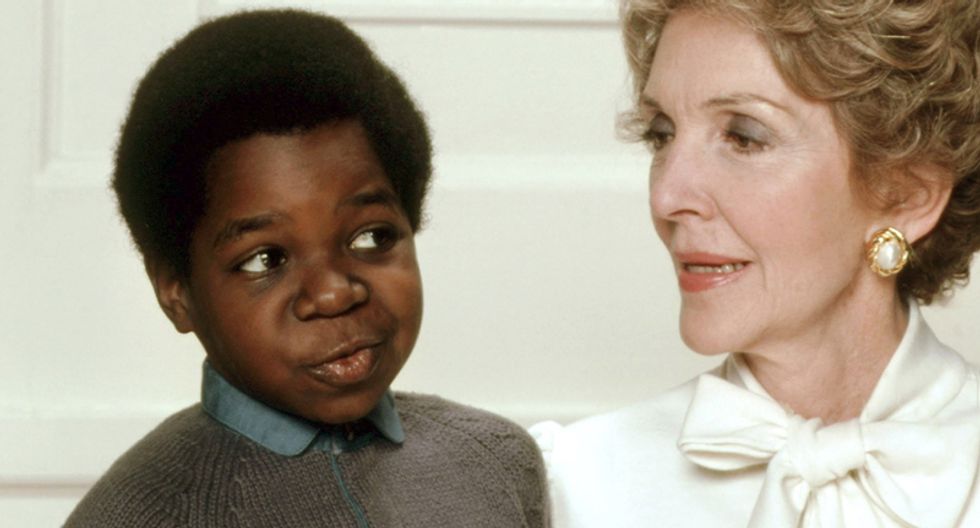 Within days last month, representatives of the famous DARE program (Drug Abuse Resistance Education) both advocated for and condemned the legalization of marijuana as the best option to keep kids safe. In a letter to the editor in Ohio’s Columbus Dispatch, deputy sheriff Carlis McDerment wrote such sensible things as, “I support legalization precisely because I want to reduce youths’ drug use. Drug dealers don’t care about a customer’s age. The answer isn’t prohibition and incarceration; the answer is regulation and education.”

DARE endorsed his position by posting it on its website. Neat! The originators of the Nancy Reagan “Just Say No” bullcrap must be evolving, right? Not so fast. On August 1, DARE director Ronald J. Brogan told New York Magazine there had been a mistake: “The article you wrote about was mistakenly posted on our website by a service we use. We have not changed our stance of being opposed to the legalization of marijuana.”

Call it a case of one step forward, two steps back. But DARE’s inane messages from law enforcement’s mouths aren't the only dumb ways people have tried to keep kids from drugging. Here are some of our favorite misfires in the quest to keep teens away from drugs. 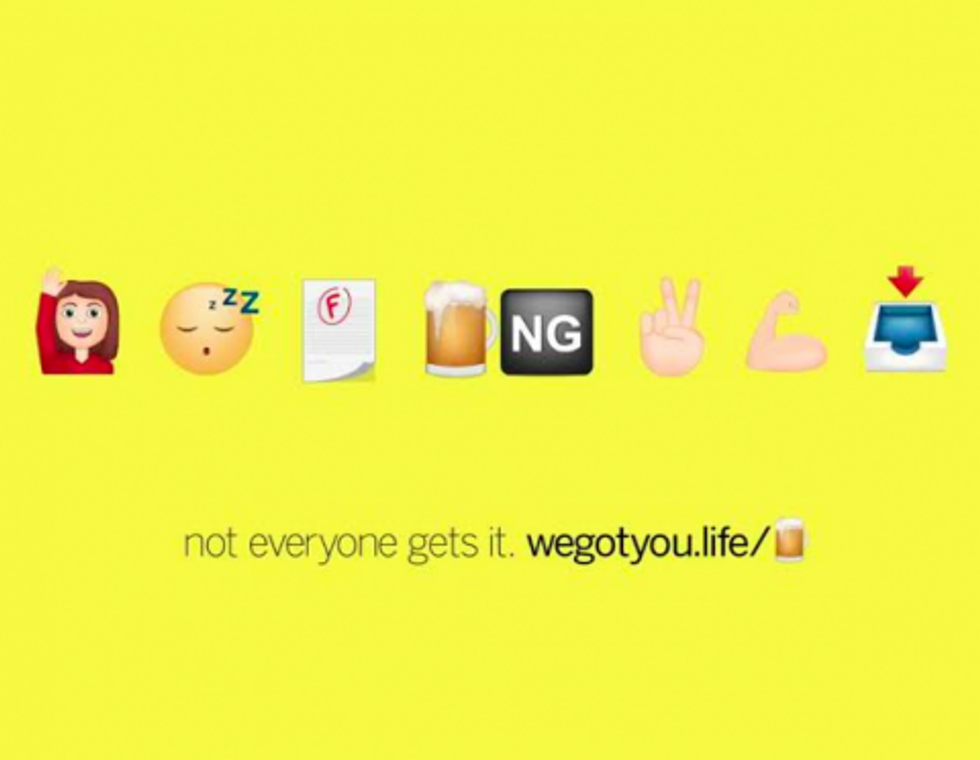 Do you know what this means? The Partnership for Drug-Free Kids thinks teens do! The wegotyou.life campaign boasts a mobile-only site geared toward young-uns who have evolved past the use of language. For the uninitiated, this billboard says, “I’m tired of drinking to fit in.” (Can we also point out that there’s neither an NG nor an F-graded paper emoji? Even I know that, and I’m so old I initially tried to access the website on an actual computer.) Even so, this campaign has racked up millions in comped ad space. Woo boy. If these ad execs were any hipper, they’d be invited to high school drinking parties.

Curious Alice, a 1971 release by the National Institute of Mental Health, also intended to warn about narcotics in a childlike context. Instead of emojis, it used the familiar tale of Alice in Wonderland as a jumping-off point for kids. It’s actually not too different from the original (already drug-related) classic: our heroine chases a rabbit, falls down a hole, and finds herself in a fantasy world full of interesting things to ingest.

But there’s one small problem: the cautionary video actually makes drugs look rad as hell. Alice is introduced to a host of drugs, including LSD, amphetamines and heroin that are represented by familiar characters like the Mad Hatter. And sure, Alice says stuff like “I don’t know [who I am]…I know who I was this morning, but I’ve changed!” But it’s tough to grapple with the downsides of consciousness-altering substances when you’re mesmerized by 12 minutes of gorgeous, psychedelic animation. You kind of want to shake Alice and say, “Girl, be open to change! Look around you and enjoy this amazing experience!”

And how effectively can you relay a message of real-world harm using a trippy cartoon? As Audrey Amidon put it in a post for the National Archives blog, “the drug users are cartoon characters with no connection to real people or real drug problems. Why take the March Hare’s drug problem seriously when you know that Wile E. Coyote falls off a cliff and is always back for the next gag?” Beware of stimulating whimsy, kids.

This one’s a doozy! A few months after 9/11, a 30-second spot called "I Helped" was rolled out by the Office of National Drug Control Policy. It features young people calmly saying stuff like, “I helped kill policemen,” and “It was just harmless fun!” Just when the viewer has been turned into a pressure cooker of moral outrage, the PSA’s message splashes across a black screen: “DRUG MONEY SUPPORTS TERROR — IF YOU BUY DRUGS, YOU MIGHT TOO.”

This thing actually played at the Super Bowl. It’s gross enough to picture some ad exec thinking 9/11 is a marvelous opportunity to shame adolescent dope fiends. But even worse, the message that drug money funds terrorism isn’t totally wrong. So how about a tagline more like, “DRUG MONEY SUPPORTS TERROR — IF YOU SUPPORT AN INEFFECTIVE AND BATSHIT DRUG WAR THAT KEEPS DRUGS ARTIFICIALLY VALUABLE, YOU MIGHT TOO.”

One all-time fave anti-drug spot from 1987 kills two liberal birds with one stone by shaming a marijuana-addled teen AND his good-for-nothing hippie dad. It all starts when Unnamed Teen is listening to rock music and playing air drums on his bed. You know, like a druggie would. Dad comes in holding his son’s stash box. "Where’d you get it?!” Dad demands. “Who taught you how to do this stuff?”

And then, the kicker: “You! I learned it from you, okay?” Oh shiiiiit. “Parents who do drugs have children who use drugs,” the narrator ominously concludes. The implication here is pretty clear: all those free-loving lefties who spent the 1960s building a safety net have sabotaged the culture of the Reagan era by creating a generation of drug maniacs. How do you like them apples, you bleeding-heart, peaceniks? Bet you feel real bad about protesting Vietnam now, huh?

5. Hey Kids, Take it from a Serial Rapist

If youth in 1971 didn't quite absorb the message from Curious Alice, they had another option: Bill Cosby’s album Bill Cosby Talks to Kids About Drugs. At this point, I won’t nauseate myself by actually listening to the thing. But I can guarantee you that Cosby’s drug criticisms don’t include the fact that certain monsters use them to facilitate brutality.

Swisher International is a hygiene company that distributes bathroom products. In 1988, it began to fight the good fight by printing “Say No to Drugs” on its urinal cakes. “It’s [a way of] getting the message out,” Swisher rep Matt Goldman explained to Mother Jones in 1999. “Putting it in a place where every guy looks.” Congrats, Drug Warriors! We can all agree that your moralizing slogans deserve to be pissed on.

7. Fake Dead Girl’s Plea from Beyond her Fake Grave

Dang, 1971 was a huge year for anti-drug hysterics. This was also the year Go Ask Alice was published, and subsequently rocked the world. Go Ask Alice was the fictional diary of an anonymous 17-year-old girl that ends abruptly after she dies of an overdose. Alice suffers a litany of horrors at the hands of LSD, pot and heroin; she runs away from home, ends up homeless and is raped by multiple men. And it all starts within a month after she was slipped an LSD pill in her soda at a party! That’s pretty bad! Teens really can’t be vigilant enough about these insidious LSD vigilantes.

Except, Alice never existed. All of Alice’s tribulations were invented by a crew of grownup hand-wringers including Beatrice Sparks, a Mormon youth counselor whose career of showing teens the made-up consequences of their choices went well beyond Alice. There’s It Happened to Nancy, about a rough-and-tumble teen who ends up with AIDS; Empty Inside: The Diary of an Anonymous Teenager about eating disorders; and The Diary of Anonymous: A Teenager in Foster Care about a runaway. Is there anything more convenient than a bunch of dead, hauntingly articulate kids whose pain aligns perfectly with your moral crusades? Bonus: one suspected co-author, Linda Glovach, also wrote a book about a sexy teen who becomes a stripper and dies.

8. Convincing Them with Dogs

We’re not sure if the Dogs Against Drugs/Dogs Against Crime anti-drug education program is still functional, because its website doesn't work at all except as a shrine to 1995. But at various points over the past several years, DAD/DAC funded police officers and their canines to speak at schools about how great their dogs are at finding all your dope. Um, the third-graders are probably happy for you? The nonprofit has been cited by the Better Business Bureau and Charity Watchdog for basically being a sham. Couldn't they train their dogs to sniff for that instead?