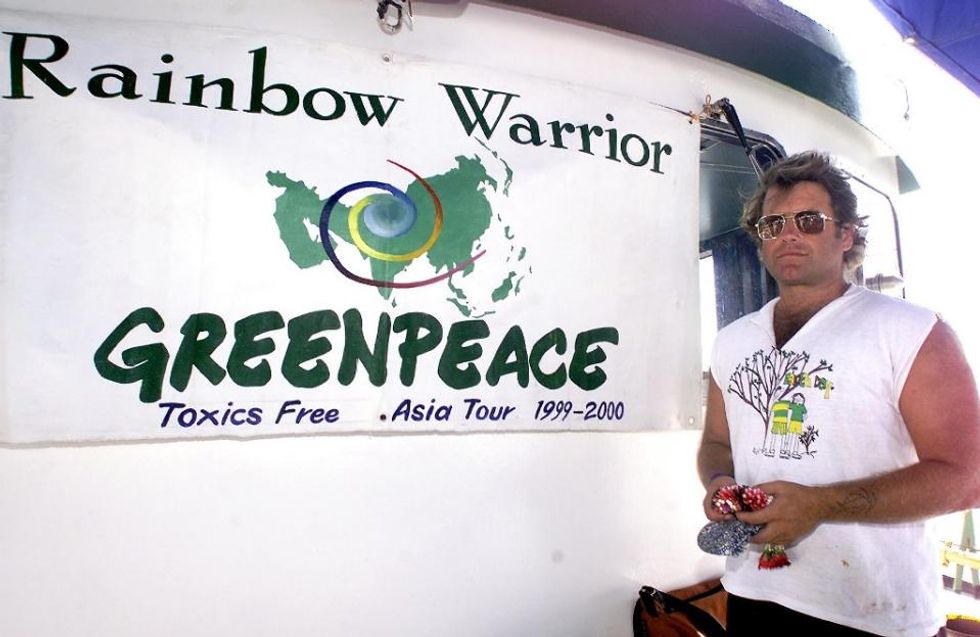 Image: Greenpeace flagship Rainbow Warrior's captain Pete Willcox poses for a photo in front of the boat's banner, upon his arrival in Bangkok, in 2000 (AFP Photo/Pornchai Kittiwongsakul)

An apology from a French secret service frogman who helped blow up the Greenpeace flagship Rainbow Warrior in 1985 does not absolve him and then president Francois Mitterrand of "cold-blooded murder", the ship's captain said Monday.

Former military diver Jean-Luc Kister on Sunday said sorry for his part in the bombing which killed Portuguese photographer Fernando Pereira and sent Greenpeace's converted trawler to the bottom of Auckland harbour.

Pete Willcox, the Rainbow Warrior's skipper on that July night 30 years ago, accepted Kister's apology was genuine but said it should not obscure the harsh truth about the attack.

"I accept the apology, I think it was sincere... I hope that it allows him to sleep better and live his life out," Willcox told Radio New Zealand.

"But it doesn't change the fact he and his friends -- (then) president Mitterrand and everybody that was part of that team, who planned the operation and carried it out, are murderers -- that should be part of the story."

The Rainbow Warrior was docked in New Zealand en route to protest against French nuclear testing at Mururoa Atoll, about 1,200 kilometres (750 miles) southeast of Tahiti, when the attack took place.

Kister was working for France's spy agency, the DGSE, which carried out an unprecedented mission to stop Greenpeace by bombing a peaceful protest ship without warning in the waters of a friendly nation.

The DGSE set off two limpet mines on the ship's hull. Pereira rushed below deck to grab his camera gear after the first explosion and drowned.

Willcox rejected Kister's suggestion the photographer's death was accidental, saying he did not believe an elite military dive squad with explosives training could bungle an operation so badly.

Pacific Media Centre director David Robie, who had been working as a journalist on the ship in the lead-up to the attack, said the bombers acted with callous impunity.

"I don't believe there was the slightest concern about the possible casualties and it was a miracle more people didn't die on board that night," he told AFP.

Two of the agents who took part -- Alain Mafart and Dominique Prieur -- were arrested in New Zealand shortly after the bombing but spent only a short time in jail under a deal reached with France.

Willcox said most of those responsible, including Kister, had never faced justice for their actions.

"Absolutely not, someone was murdered in cold blood," he said.

"Two people that were part of the team spent a year in jail... No, I don't think justice was ever done. I think that's a ridiculous notion."