Japanese pop star sued for thousands for possibly having a relationship 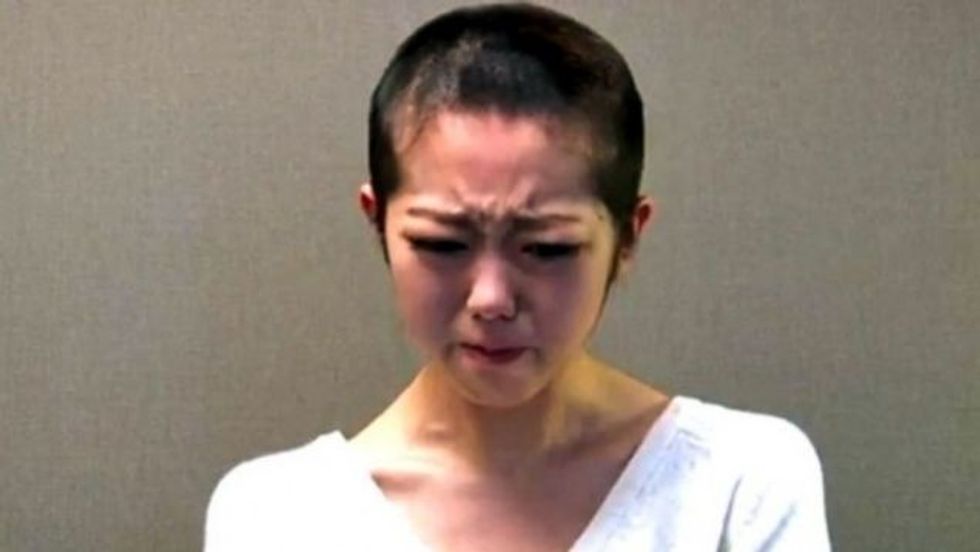 Japanese pop star Minami Minegishi shaved her head as a way to show remorse for spending the night with a boy band member.

A former member of a Japanese girl group, also known as an "idol group," has been ordered to pay $5,400 to the management company that represented her. Her crime? Doing what most teenagers do and having the audacity to date.

The 17-year-old is the first artist in Japan to be ordered to pay damages for breaching the dating clause in her contract. Although the dating restrictions sound unusual by U.S standards, it's common for idol stars to sign agreements barring them from romantic engagements. In fact, it's an important part of being considered a desirable female pop singer in the country.

"The clause prohibiting dating was necessary to get the support of male fans," said Judge Akitomo Kojima in his ruling. He also added that "The revelation of an idol's relationship damages their image."

The whole point of the clause is to ensure that Japanese boys continue to fantasize about having a chance with the pop stars. The singers are depicted as the girl-next-door who's incredibly innocent, fiercely sexy, and attainable for any boy. Getting caught with the opposite sex supposedly "tarnishes" the image their management companies strive for.

It's important to keep in mind that these underaged girls are marketed as sex symbols with their school girl costumes that would make Britney Spears circa 1998 seem tame. In other words, they're supposed to be thought of as sexy scantily-clad virgins.

Does anyone else see how ridiculous that is? One might argue that they signed these contracts, so they know what to expect. But often times their parents are the ones who sign the agreements since the minors aren't old enough to do it themselves. The fact that they're scantily-clad minors is also a bit of an issue, but that's also a problem in the U.S.

There have been other scandals in the past, although they haven't resulted in successful lawsuits. In one incident, Minami Minegishi from a girl group called AKB48, shaved her head as an act of remorse after it was revealed she had spent the night with a boy-band member. The idea that she was shamed into thinking she needed to shave her head is so pathetic that I can hardly wrap my brain around it.

Sometimes members of boy groups have similar clauses in their contracts, so this issue isn't unique to girls. However, it's less common and more forgivable for boys to have relationships. Jin Akanishi was reprimanded by his agency Johnny & Associates for marrying fellow singer and actress Meisa Kuroki in 2012 before reporting it to the company.

Aren't people in Japan insulted by this? Not only are these young singers having their personal lives picked apart by management companies who are making a fortune off their talents, but artists are being minimized to nothing more than sexual fantasies. The same happens in the U.S., but it would be a lie to claim that it happens to the same extent. Celebrities have relationships all the time, and they're not considered "ruined" or worthless if they engage in something as commonplace as dating.

At the same time, their fans are being minimized to lonely and lustful people who sit around and fantasize about provocatively dressed kids. Don't get me wrong - I do the same thing with adult actors like Chris Pine or Adrian Grenier. However, I appreciate their acting abilities and also pardon them if they have relationships. I'm open-minded that way.

I guess as someone who has a live and let live mentality, the management behind these singers rubbed me the wrong way. It's yet another example of an entertainment industry focusing on the irrelevant components of an artist's personal life as opposed to what they have to offer talent-wise.