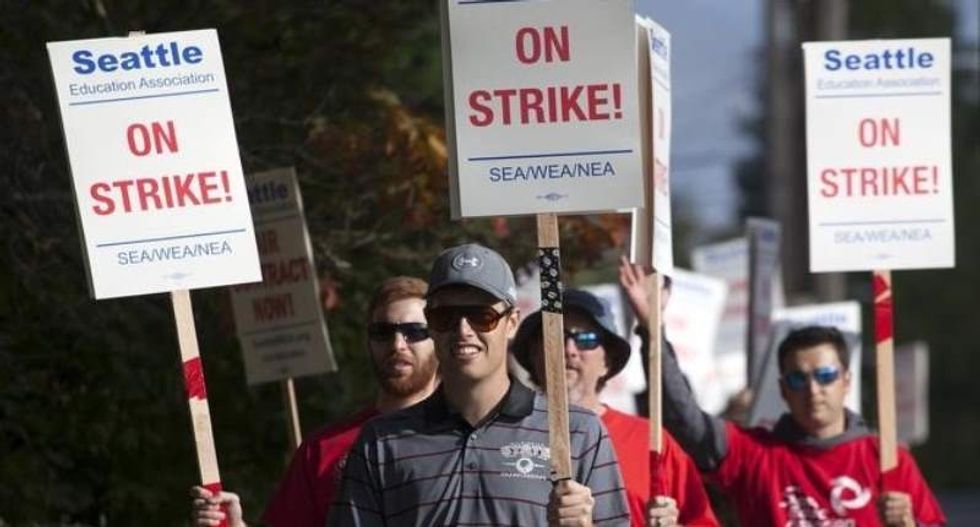 Teachers walk the picket line as they strike outside Roosevelt High School in Seattle, Washington on Sept. 9, 2015. Photo by Matt Mills McKnight for Reuters.

Striking teachers and the Seattle public school district reached a tentative agreement on Tuesday to end a nearly week-long walkout that has idled the city's 53,000 students during the first days of the school year.

Leaders at the Seattle Education Association teachers' union voted Tuesday evening to end the strike after bargainers reached a three-year agreement earlier in the day.

Seattle Public Schools said classes would start Thursday, allowing teachers and the district a day to prepare for the arrival of students.

The union said it secured pay raises totaling 9.5 percent over three years, after originally asking for 18 percent earlier this month. That is on top of a state-approved, 4.8 percent cost-of-living adjustment.

Other changes include ending the practice of linking teacher evaluations to test scores and compensation for adding time to the school day, which the district had wanted.

Stacy Howard, a spokeswoman for Seattle Public Schools, said the accord came after "both teams worked diligently all day Monday and overnight," following marathon weekend talks.

Union spokesman Rich Wood said they were "excited and pleased" with the tentative agreement struck with the help of state mediators.

"Both teams have worked long hours for months, to make this happen," Wood said, adding teachers had been told to return to the picket lines on Tuesday, where they were to receive information about the deal.

The full union has a vote scheduled for Sunday on whether to approve the contract.

The strike, which left many working parents scrambling to improvise childcare arrangements, marked the first labor-related disruption of classes in three decades for the largest public education system in the Pacific Northwest.

Some 5,000 teachers and support staff walked off the job last Wednesday on what should have been the start of the new school year after talks collapsed the night before in a disagreement over wages, hours and performance evaluations.

One of the teachers' chief grievances is they have received no cost-of-living raise in six years despite surging living expenses in Seattle, particularly for housing, fueled largely by growth in the city's technology sector.

Howard had said previously that once classes do resume, the district may have to ask students to attend school on Saturdays, shorten holidays, or end the school year at a later date to make up for the lost time.