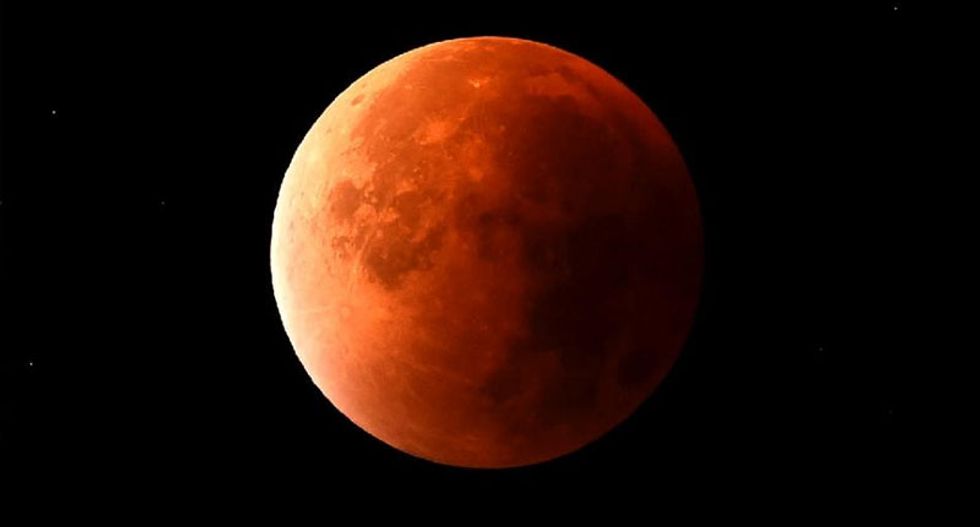 A 'super blood moon' is seen in the sky in Essen, western Germany, on September 28, 2015 (AFP Photo/Patrik Stollarz)

Skygazers were treated to a rare astronomical event Monday when a "supermoon" and lunar eclipse combined for the first time in decades, showing Earth's satellite bathed in blood-red light.

The celestial show, visible from the Americas, Europe, Africa, west Asia and the east Pacific, was the result of the sun, Earth and a larger-than-life, extra-bright moon lining up for just over an hour.

Images from France, Argentina and the United States, among others, capture the progression of the lunar eclipse to a striking red finale.

In Brooklyn, New York, crowds of people gathered on plazas and sidewalks, gazing up at the sky and trying to take photos with their smartphones -- though in other cities, including Washington, cloud cover hid much of the spectacle.

While the phenomenon was not visible in any major Indian cities, stargazers equipped with telescopes were able to catch a glimpse of the eclipse in the country's remote northeast.

The event also led to speculation about an impending apocalypse among certain followers of the Mormon Church of Jesus Christ of Latter-day Saints.

The fears are believed to have been stoked by a statement from Mormon author Julie Rowe, who regularly speaks to audiences about upcoming worldwide calamities.

Church officials were forced to issue a statement warning against panic, saying that while members should be "spiritually and physically prepared for lifeâs ups and downs" they should avoid "being caught up in extreme efforts to anticipate catastrophic events".

The "blood moon" -- which so far has had no apocalyptic consequences -- appeared in stages across the planet as the satellite reached its closest orbital point to Earth, called perigee, while in its brightest phase.

The resulting "supermoon" appeared 30 percent brighter and 14 percent larger than when at apogee, the farthest point -- which is about 31,000 miles (49,900 kilometers) from perigee.

Unusually, the Earth took position in a straight line between the moon and the sun, blotting out the direct sunlight that normally makes our satellite glow whitish-yellow.

But some light still crept around the planet's edges and was filtered through its atmosphere, casting an eerie red light that creates the blood moon.

For people younger than 33, this was their first-ever chance to see a "super blood moon".

On top of the wow factor, the event was also of great interest for researchers.

Over a 24-day cycle, the temperature on the surface of our satellite normally varies between highs of about 121 degrees Celsius (250 degrees Fahrenheit) in direct sunlight, and lows around minus 115 C in the dark.

These changes help researchers study the composition of the crust, as rocks warm and cool slower than sand-like dust.

But on Monday, the eclipse saw that temperature shift happens much faster, allowing scientists to make detailed observations of the moon's uppermost surface.

On Tuesday, the Justice Department announced a lawsuit against billionaire former casino magnate and pro-Trump Republican megadonor Steve Wynn, to compel him to register as an agent of the Chinese government under the Foreign Agents Registration Act.

"Defendant is obligated to file these materials by virtue of his acting as an agent of two foreign principals: Sun Lijun ('Sun'), the former Vice Minister for Public Security in the People’s Republic of China ('PRC'), and the PRC itself," said the Justice Department's filing.