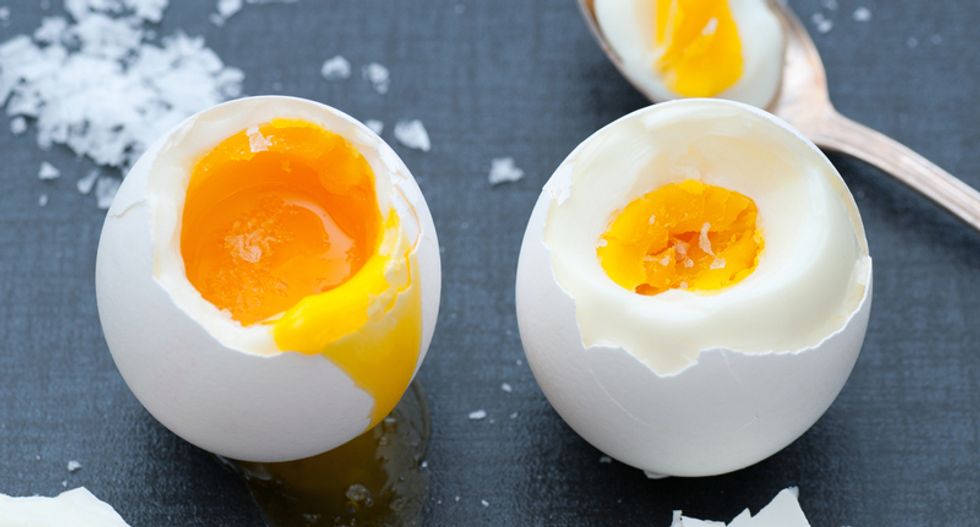 A government-controlled industry group targeted popular food bloggers, major publications and a celebrity chef as part of its sweeping effort to combat a perceived threat from an egg-replacement startup backed by some of Silicon Valley’s biggest names, the Guardian can reveal.

The lobbyists’ media counterattack, in possible violation of US department of agriculture rules, was coordinated by a marketing arm of the egg industry called the American Egg Board (AEB). It arose after AEB chief executive Joanne Ivy identified the fledgling technology startup Hampton Creek as a “crisis and major threat to the future” of the $5.5bn-a-year egg market.

A detailed review of emails, sent from inside the AEB and obtained by the Guardian, shows that the lobbyist’s anti-Hampton Creek campaign sought to:

The scale of the campaign – dubbed “Beyond Eggs” after Hampton Creek’s original company name – shows the lengths to which a federally-appointed, industry-funded marketing group will go to squash a relatively small Silicon Valley startup, from enlisting a high-powered public relations firm to buying off unwitting bloggers.

One leading public health attorney, asked to review the internal communications, said the egg marketing group was in breach of a US department of agriculture (USDA) regulation that specifically prohibited “any advertising (including press releases) deemed disparaging to another commodity”.

Tetrick called for the USDA to clamp down on the food lobby, as thousands of petitioners called on the White House to to investigate the USDA itself for “deceptive endorsements”.

“This is a product that has been around for a very long time,” the Hampton Creek founder said. “They are not used to competition and they don’t know how to deal with it.”

In statements, AEB’s Ivy and a USDA official denied any wrongdoing. An agriculture department official said that it “does not condone any efforts to limit competing products in commerce”.

The AEB contracted Edelman, the world’s largest public relations company, to coordinate the attack. One passage within the email tranche suggests that AEB amended its contract with Edelman to include a section called “Beyond Eggs Consumer Research”.

“Conduct qualitative/quantitative consumer research to pinpoint and prioritize areas of focus. For example, research will, ideally, provide actionable intelligence on what attacks are gaining traction with consumers and which are not so as to help industry calibrate level of communications response (if any) to ensure a consistent response strategy moving forward,” the passage reads.

“Ads considered disparaging are those that depict other commodities in a negative or unpleasant light via either video, photography or statements,” said attorney Michele Simon, of the law firm Foscolo and Handel, after reviewing the AEB emails. “The entire contract [amendment] with Edelman violates this rule.”

Some of the web’s biggest food blogs were unwittingly paid from the “Beyond Eggs” budget to write supportively about eggs as AEB executives privately expressed mounting frustration about Hampton Creek, whose high-profile backers include the Facebook backer Peter Thiel, billionaire investor Vinod Khosla and other Silicon Valley luminaries.

When one Edelman executive, Jamie Singer, advised that the board wait on “an eventual and organic balancing of the media narrative”, Kevin Burkum, AEB’s senior vice-president of marketing, shot back: “Help us understand why the recommended course of action seems to always be sit back and do nothing?”

The TV chef, the unwitting bloggers and the bagel quiche recipe

More recently, Hampton Creek has in fact faced its own PR woes with allegations of suspect science and hazardous work environments . And last month the US Food and Drug Administration warned the California startup that the name of its flagship product, Just Mayo, was misleading and and should be renamed, insisting an egg-less product should not be described as mayonnaise.

The emails reveal how AEB executives had grown increasingly frustrated about coverage of Hampton Creek, hailing the company as providing a high-tech and sustainable alternative to factory-farmed eggs.

In an email an AEB executive noted a blogpost by Zimmern – an influential TV celebrity – that complimented Hampton Creek and described caged-chicken egg production as “the poster child for everything farming and food systems shouldn’t be”.

The AEB executive complained Zimmern’s post was “a new love letter” to Hampton Creek and suggested sending the TV chef a study underwritten by the AEB to contradict his take. A long exchange discussed whether or not to respond to Zimmern’s offer to host a bake-off between Beyond Eggs and hen eggs.

On behalf of the egg group, Edelman contacted high-profile food blogger and Food Network star Drummond, author of several top-selling cookbooks. Drummond did not agree to work on the campaign, the emails indicate. The group also sought out Grandin, another famous figure whose endorsement would have been valuable. Grandin, too, appears to have declined.

In 2013, Google bought ads against Hampton Creek’s name and other search terms including Tetrick’s name and his chief product, Just Mayo, so that links to egg board-sponsored talking points about industrial farming would pop up alongside links to Hampton Creek. The AEB emailed about how to deal with Buzzfeed’s Rachel Sanders, who reported on the ads , and others who followed up on the campaign, in the emails.

The AEB retained at least five bloggers and contacted many more during the period covered by the emails. The bloggers disclosed the egg group’s advertising on their sites. The two bloggers who responded to the Guardian for this article said they were completely unaware that the sponsorships were part of a concerted effort against Hampton Foods.

Hemi Weingarten, author of the popular food blog Fooducate and an occasional columnist for the Huffington Post, published a post marked as sponsored by the AEB entitled “10 Reasons to Love Eggs” that including this sentence: “At just $0.15 each, eggs are the least expensive source of high-quality protein per serving.” This language is consistent with one of the American Egg Board’s most regularly used talking points.

Weingarten said he knew nothing of the campaign against Hampton Creek and pointed out that his blog had published positive coverage of the company. “As part of our ad sales activities we reach out to healthy brands and commodity boards to spend their ad dollars to reach our audience,” Weingarten told the Guardian.

Lori Lange, of the popular blog Recipe Girl, is listed by Edelman as receiving a fee of $2,500 for a bagel quiche recipe . Lange disclosed the post was sponsored. The Guardian emailed Lange for comment; she did not respond but did remove an AEB infographic that read in part: “Today’s hens are producing more eggs and living longer due to better health, nutrition and living space.”

Blogger Gaby Dalkin was paid $2,000 to include the AEB’s “Incredible Eggs” talking points in a recipe for breakfast burritos, and Susan Whetzel of Doughmesstic included the language in her in her Italian Egg Frittata recipe , according to the emails. Both disclosed the posts were sponsored.

Whetzel said she, too, was unaware that the blogpost was considered part of a campaign against Hampton Creek by the AEB, and that she had adhered to the Federal Trade Commission’s advertising guidelines by including a disclosure notice. “It’s obvious it’s a sponsored post,” she wrote in an email to the Guardian.

Dalkin did not respond but an email bounceback said she was out of the country.

The ‘balance’ of a lobby, the rise of a startup and the Egg Person of the Year

The messages show Ivy, who is set to leave the AEB at year’s end after being named the industry’s 2015 Egg Person of the Year , received many messages from egg producers and processors who make up the board’s constituent members, are required by law to supply its budget and were evidently unnerved over the rise of Hampton Creek.

Ivy expressed a desire to push back at the positive media coverage the company would start to receive, from the pages of Forbes magazine to Buzzfeed and beyond.

“We know that shell egg producers are [...] feeling threatened by the introduction of this product,” she wrote in a September 2013 email.

In a statement to the Guardian, Ivy said the AEB’s efforts to “balance existing media efforts” were “common” practice and “part of a larger business strategy”.

“While egg replacers have been around for many years, we recognize that the interest in this category has increased recently,” she said. “[I]n response, we bolstered our efforts to increase the demand for eggs and egg products through research, education and promotional activities.

“These activities, which are common within the consumer products industry, include continuing to work with industry thought-leaders, conducting a paid social media strategy to balance existing media efforts and liaising with partner organizations.”

However it is the process of targeting a perceived rival that could prove most controversial for the AEB, a statutory body paid for by industry but partly appointed by the US agriculture secretary. Paid-for or “sponsored” blogposts are not uncommon, but the notion that a quasi-governmental body funded a campaign to undercut a Silicon Valley food startup could raise eyebrows.

Tetrick, the Hampton Creek founder, called for a congressional inquiry on Thursday , saying that the agriculture department should be held responsible for the AEB’s actions.

“They have gone way beyond what they are allowed to do,” Tetrick said of the egg lobbying group.

He said the scale of the egg lobby’s retaliation against his company’s rise was “hard to wrap your head around”.

“They play the same game over and over again,” he told the Guardian on Friday. “They say they are doing it to promote eggs, but it’s got nothing to do with competition.”