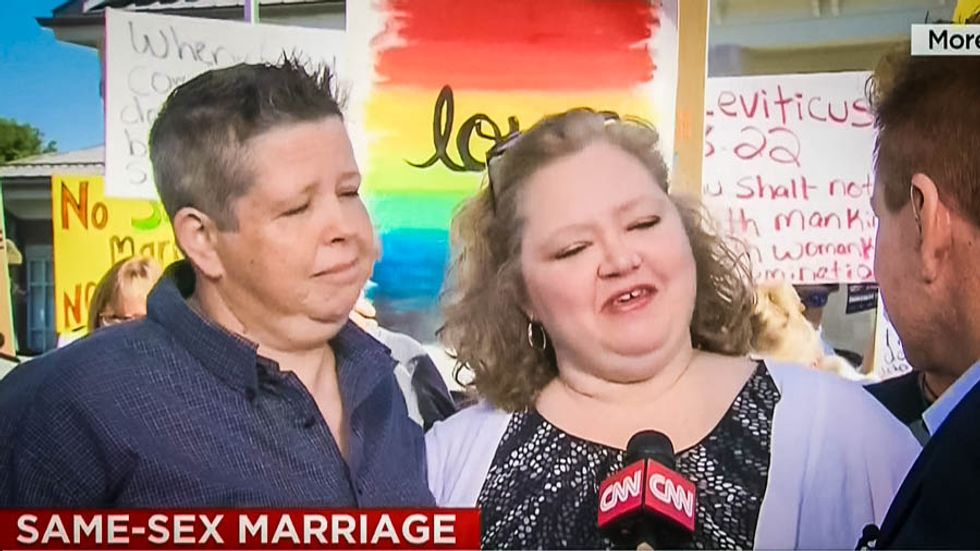 A Kentucky lesbian couple in Rowan County faced yelling Christians on Monday as they as they applied for a marriage license on Monday.

After Kim Davis announced on Monday that she had returned to work but would not interfere if her clerks wanted to serve same-sex couples, CNN's Martin Savidge spoke to Shannon and Carmen Wampler-Collins, who were seeking a marriage license.

"We're here to make Rowan [County] a better place for the teens growing up here," Carmen explained. "We want to make it safe for them."

"I grew up here," Shannon pointed out, "and never in my life expected that I would be able to do this here in my hometown where I grew up with my family."

Moments later, the couple entered the clerk's office and were met by a rowdy crowd of Kim Davis supporters.

"Your sin is going to be your demise!" a man yelled. "Because he loves you, he is calling you to himself today... You can't satisfy yourself, only God can satisfy your needs!"

"It's an oxymoron!" the man continued. "It is a lie from the pit of Hell that destroys those who participate in homosexual sodomy, and destroys nations that approve of that! So young ladies, today God is calling you to himself!

But against the protests of Davis' supporters, Shannon and Carmen left the clerk's office with a marriage license.