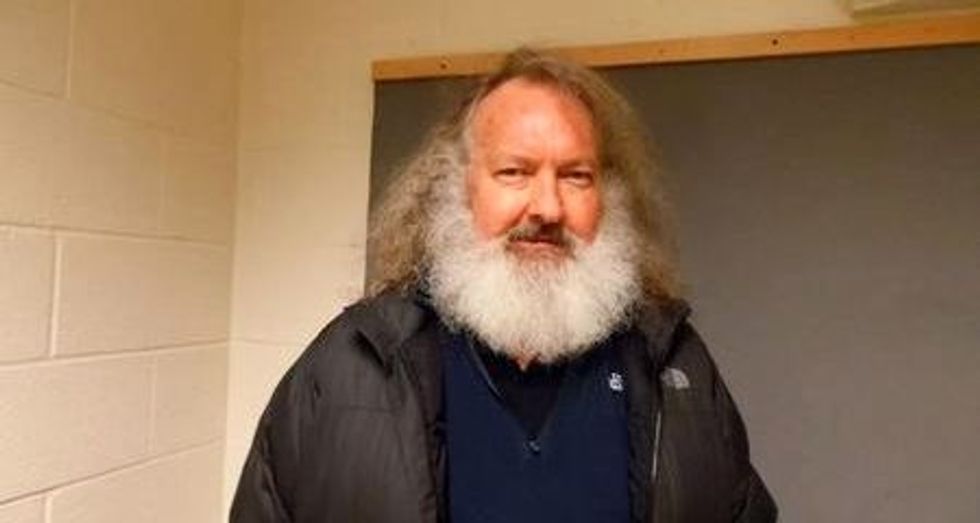 U.S. actor Randy Quaid is shown after being arrested at the U.S. Border crossing from Canada at Highgate Port Of Entry, Vermont October 9, 2015 in this photo released by Vermont State Police on October 10, 2015. REUTERS/Vermont State Police/Handout

A Vermont judge ordered actor Randy Quaid held on a $500,000 bail on Monday after the film star was arrested on charges related to a 2010 trespassing allegation in California.

Quaid, 65, was arrested along with his wife, Evi, while attempting to cross into the United States from Canada on Saturday and are being held awaiting extradition on arrest warrants outstanding in California, police said.

Quaid is wanted in California on charges related to a 2010 incident in which he and his wife entered a Santa Barbara, California, building that the couple contends they legally owned at the time. He faces charges of vandalism, unauthorized entry into a dwelling and failure to appear for a court appearance in California.

During a court appearance in St. Albans, Quaid said he had not been informed ahead of time of the 2010 court proceeding, which he said occurred while he was in Vancouver on a previously scheduled trip.

"We heard about it through the Internet, that we'd missed this court appearance," said Quaid, sporting long hair and a bushy gray beard. His lawyer suggested the bail amount, based on an outstanding bail order in California, was excessive.

He also offered a lengthy explanation of what he said was a bail bondsman's mishandling of his California case.

"I don't disagree with you that $500,000 is high bail," Vermont Superior Court Judge Alison Arms told Quaid. "However, this court is considering the fact that this warrant was issued almost exactly five years ago and that Mr. Quaid has been in Canada that entire time."

Evi Quaid was also ordered held on a $500,000 bail in a separate court appearance.

Randy Quaid is known for movies such as "The Last Picture Show" and "The Last Detail," for which he received an Oscar nomination, as well as the 1980s "Vacation" comedies. He is the older brother of actor Dennis Quaid.

Arms declined to immediately rule on whether she had probable cause to hold Quaid pending possible extradition to California, after Vermont prosecutors said they were unable to produce more details on the California charges due to Monday's Columbus Day holiday. The judge gave them until Thursday to produce those documents.

Evi Quaid is a dual U.S.-Canadian citizen, while Randy Quaid has been seeking Canadian citizenship as the couple has lived in Montreal for the past three years.

(Reporting by Scott Malone in Boston; Editing by David Alexander and Sandra Maler)