Comedian explodes on 'self-loathing' gay conservative who wants to be straight: Face it, 'you are gay as f*ck!' 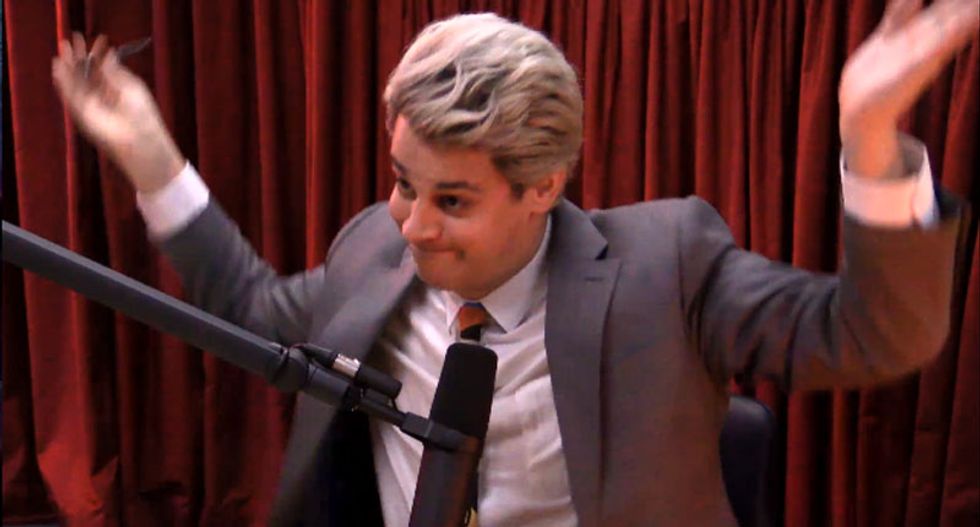 A comedian and a gay conservative Christian journalist got into an explosive feud over the latter's sexuality.

Breitbart columnist Milo Yiannopoulos appeared Wednesday on The Joe Rogan Experience podcast, where the duo bashed feminists, the left, and so-called “social justice warriors” in a mostly friendly conversation. Things became heated, however, after Yiannopoulos brought up his religious beliefs.

"Everywhere that doesn’t have a strong Christian heritage is a f*cked up place with bad morals," Yiannopoulos asserted.

Yiannopoulos insisted describing Christian culture in the United States and Europe as “better” than the rest of the world was accurate. “I think it is uncontroversial to say so.”

"Ultimately, our sense of right and wrong comes from the Bible," he added, after being questioned again by Rogan.

"If you think that the only way for a person to have ethics or an understanding of each other or compassion for each other is to rely on ancient myths that are easily scientifically disproven – well, that’s what Christianity is," Rogan said.

Yiannopoulos acknowledge that some sense of right and wrong might have a biological origin, but insisted that most of the values of Western culture were derived from Christianity.

Then Rogan brought up Yiannopoulos' sexuality.

"You yourself, your lifestyle, is proof positive that the evolution of what this used to be and what it is today," Rogan began to say, before being cut off.

"Well, evolutionarily-speaking, I’m an outlier because, as you know, gay people generally test higher for IQ than the rest of the population and lots of evolutionary biologists suggest that people with high IQs tend to engage in dissident or unusual habits and practices in general because that is where mother nature does her experimentation... I'm not typical of the bulk of the species."

"Right, but what you are, who you are, being a gay man that is promiscuous, that is prohibited in the Bible," Rogan said.

"Yes, but I would agree it would be better if I didn't behave like this," Yiannopoulos said.

"Do you really? So you're a self-loathing homosexual?" Rogan replied, a description Yiannopoulos quickly dismissed.

"You need to read this wonderful essay by," Yiannopoulos began to say, before Rogan interrupted: "No, I don't need to read shit. I need to know what the fuck you are saying -- because what you're saying is who you are is prohibited in the Bible."

"It's not 'who you are,'" Yiannopoulos explained, "because I don't think my sexuality is an important component of my personality."

But Rogan insisted it was a huge part of Yiannopoulos' personality and again brought up Biblical teachings.

"If I could choose, I wouldn't be a homosexual," Yiannopoulos said. "That doesn't make me self-loathing."

"You don't think it makes you self-loathing to hate a part of what you are?" Rogan asked.

Yiannopoulos said he didn't hate himself, but thinks he would be "even better" if he could not be gay.

Rogan then asked Yiannopoulos if he would be willing to cure himself of homosexuality if such a thing was ever invented.

"Well, it would be career suicide, but I probably would, yeah," Yiannopoulos said.

Rogan doubted his career would be damaged, noting Yiannopoulos would become the "poster boy for [the] Christian right."

"It's true," Yiannopoulos said jokingly. "If I were to pray the gay away, I would be so popular... OK, I am going to enroll in one of these camps again."

"The camps don't work," Rogan said, "they are just an excuse for dude's to get together and f*ck each other -- like Michele Bachmann's husband, you ever heard about the camp that guy was running? That guy's the greatest."

After noting a white supremacist murderer who was caught with black prostitutes, Rogan again returned to Yiannopoulos sexuality. "I just can't believe you would decide to not be gay if you could. Is that because of Christian values?"

"No, no, no," Yiannopoulos said. "I don't think it is self-loathing to acknowledge that being a homosexual is obviously a sort of an aberrant sexuality, something that mother nature does on the fringes, so nobody really knows why, and it could be an elegant variation in the evolutionary process, it could be all sorts of things, who knows... from a Christian perspective it could be a test."

"What?" Rogan interjected. "From the Christian perspective it could be a test?"

Yiannopoulos explained that some Christians believed that having homosexual desires was a test from God. "So they don't blame you for who you are, they consider what you do."

"You over everyone should know that is bullsh*t," Rogan remarked. "You are gay as f*ck... Dude, you are gay as f*ck, ok? There is not a godd*mn choice in the world for you other than being gay. You are the perfect example of this sh*t being nonsense, that it's a choice."

Watch a clip of the video below: