In an Oregon gun shop, President Obama's message does not sit well 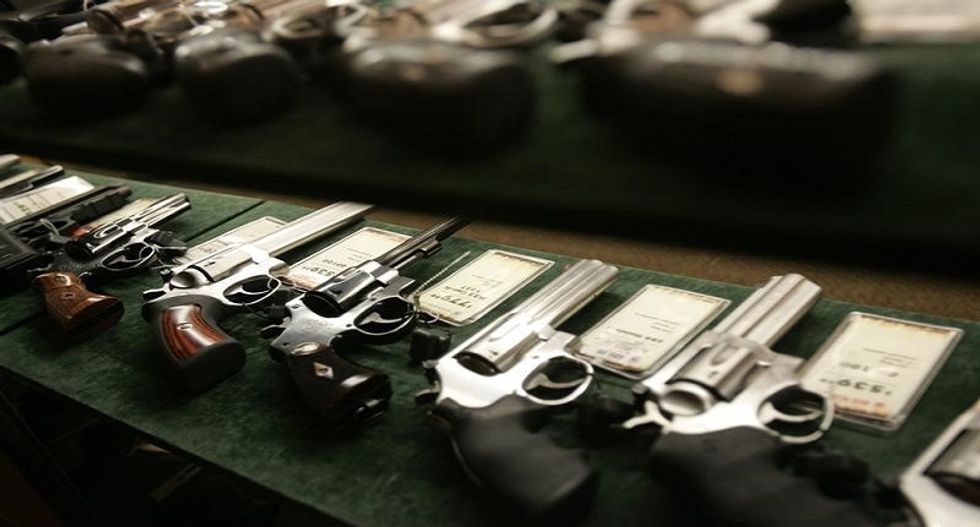 Guns are seen inside a display case at the Cabela's store in Fort Worth, Texas, June 26, 2008. REUTERS/Jessica Rinaldi

The first thing customers entering the Roseburg Gun Shop see is a life-sized cardboard cutout of President Barack Obama with a Middle Eastern scarf around his head and a badge pinned to his chest that reads: "Gun salesman of the year."

The customers and sales staff in this store, located 10 miles (16 km) from Umpqua Community College, where a gunman killed nine people and injured nine others on Thursday, said they were horrified by the shootings. But they were not buying the president’s argument that guns were the problem.

On Friday, as customers browsed in the store, many of them preparing for the start of deer hunting season on Saturday, talk was focused on Obama's call the previous evening for stricter gun laws. No one there liked the idea.

Don Sheldon, 52, a police officer in the town of Winston, which borders Roseburg to the south, said that when he pulls people over and learns they have a concealed carry permit, he thanks them.

"Because they're exercising their Second Amendment rights," Sheldon said.

The gunman, Chris Harper-Mercer, who was killed during a shootout with police, lived in Winston.

Hours after the shooting, a visibly frustrated Obama urged Americans to press their elected leaders to enact tougher firearms safety laws, and he criticized those who in a knee-jerk fashion oppose "common-sense gun legislation."

It was the last thing people like Sheldon wanted to hear. "I'm tired of the government telling me what to do all the time," he said.

Thomas Adair, 66, another customer, is a shooting instructor in the area. More people need to be armed, he said, and gun-free zones, such as those at schools, should be eliminated.

"I've been telling the people in my classes the last few years that UCC is not a safe place," he said, echoing a common view in the store that if students had been allowed to carry guns to school, someone might have stopped Thursday's shooter faster.

Both said they supported the public statements by Douglas County Sheriff John Hanlin, who has vigorously opposed gun control laws and even said he would not enforce new ones locally.

Sheldon said more local residents should have guns. "Law enforcement can't be everywhere," he said, adding: "Most of us police officers around here feel the same way."