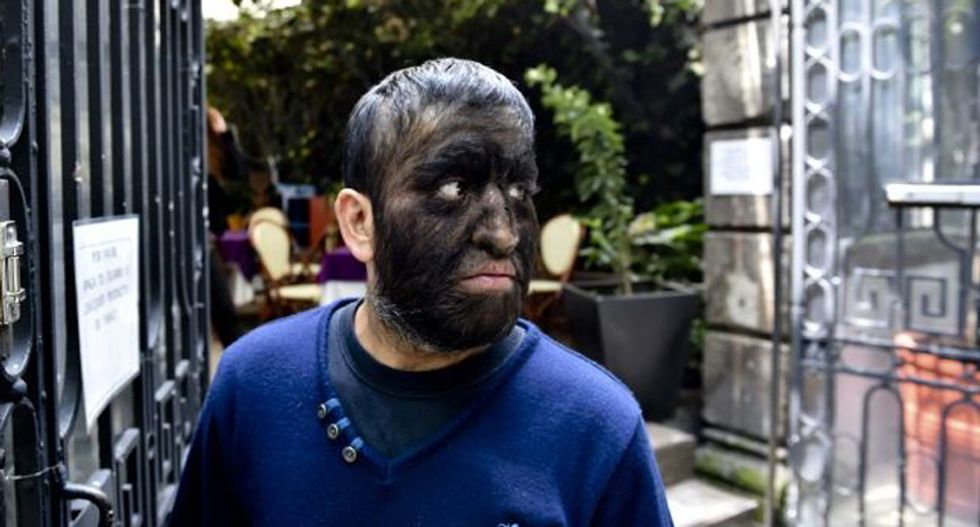 esus Aceves may never get used to people's stares, but after decades of alcoholism and a painful career as a circus freak, he has made a resolution: to stop burying his hair-covered face in his hands.

Aceves, a 41-year-old Mexican man, has an extremely rare condition called hypertrichosis, also known as "werewolf syndrome" -- an abnormal amount of hair growth on the face and body.

Just 50 cases of hypertrichosis have ever been documented. Thirteen of them -- seven men and six women -- are members of the same Mexican family from the town of Loreto in the central state of Zacatecas.

One of those family members is Aceves, who goes by the nickname "Chuy" and has struggled to deal with the social fallout of the condition all his life.

"Why did God make me this way? Why am I different?" Aceves says he has asked himself since he was small.

Over the years, Aceves developed the habit of walking around with his hands over his face in an effort to dodge strangers' stares.

As a boy, he dropped out of school, where classmates mocked him, bullied him and pulled his facial hair.

He turned to alcohol at just 13 years old, developing an addiction that would haunt him for years.

To support himself, he joined a circus together with two cousins who have the same condition, earning about $8 a day.

Hypertrichosis, which is caused by a genetic mutation, does not have any other symptoms besides hair growth.

But it makes it very difficult to get a job, go to the store, make friends or find love.

"I don't understand it, really. I believe it shouldn't be that way. But unfortunately it is. They don't give you opportunities, just because you're different," Aceves told AFP.

Speaking in a warm voice, Aceves recounts his difficult life, from his traumatic childhood to his stint working at the Circus of Horrors in London.

The only time a timid smile crosses his face is when he recalls the two occasions when he shaved his facial hair for appearances on TV shows -- one Japanese and one British.

"It wasn't a very pleasant experience. I didn't like it. I looked stranger. My face looked like Herman Munster -- purple or blue," he said.

At first, he enjoyed working in the circus, where he met his wife, a clown with whom he has a 13-year-old daughter who also has hypertrichosis.

But over the course of more than 20 years, being a professional freak took a toll on his self-esteem.

"It damaged me, but I only realized that a long time later," he said.

Several months ago, he started a new career, collecting bottles and cardboard in the street for recycling.

And while he is estranged from two daughters from previous relationships -- who also have hypertrichosis -- he says he has finally found peace in family life.

"We've been lucky, we're doing well. It's complicated sometimes, but I think if you're honest and decent, you can have a good family," he said.

Along with his new work, Aceves says, he has also started a new life.

He gave up drinking and no longer tries to hide his face in the street.

"I'm sick of feeling uncomfortable. I'm just like everyone else and I need to be happy," he said.

Aceves' struggles are depicted in the new documentary "Chuy the Wolf Man" by Mexican filmmaker Eva Aridjis, who spent a year and a half with him and his family.

For Mexicans, their story inevitably recalls that of Julia Pastrana, an indigenous woman from the northern Mexican state of Sinaloa whose hypertrichosis made her an international sensation in the 19th century.

Pastrana was displayed around Europe as "The Monkey Woman" or "The Ugliest Woman in the World."

After she died from complications of childbirth in 1860, her body and that of her baby were embalmed and put on display in freak exhibitions for decades.

Her remains were only buried in 2013, after a campaign to bring them from Norway back to Mexico.