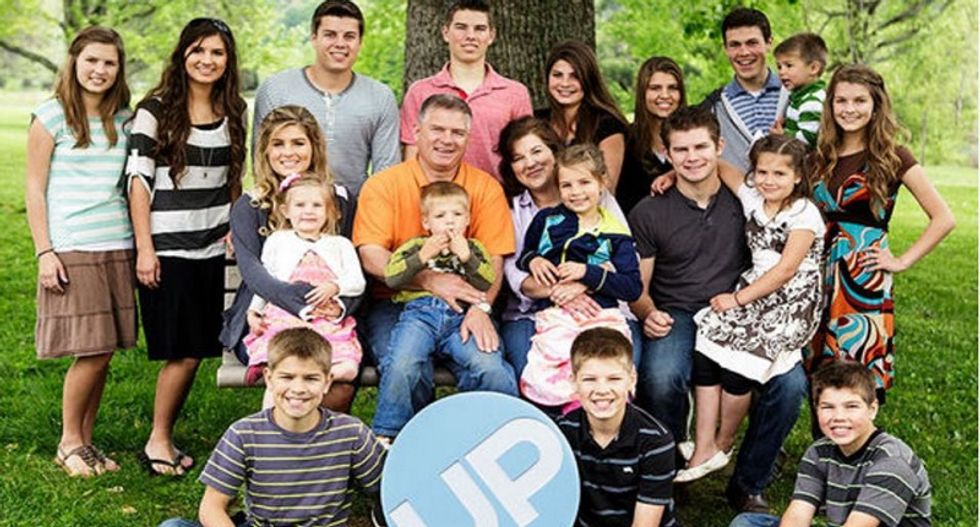 It seems like a strange parallel universe, but it's not. Another devoutly Christian family with 19 kids and counting has been accused of sexual abuse, RadarOnline reports.

Five women are suing the Institute in Basic Life Principles, the so-called treatment center to which Jim Bob and Michelle Duggar sent their eldest son, Josh, after they learned he had molested five underage girls, including his own sisters.

The women claim the organization allowed them to be subjected to "sexual abuse, sexual harassment and inappropriate/unauthorized touching" by employees and agents, according to RadarOnline.

One of the defendants includes Gil Bates, a friend of the Duggars and star of yet another reality show, Bringing Up Bates, which airs on UPtv.

Bates and the others are accused of covering up the allegations and failing to take appropriate action upon receiving reports of sexual misconduct.

The Duggar's own show, 19 Kids and Counting, was cancelled by the network TLC after the molestation allegations against Josh came to light in May.

Since then the self-proclaimed "pro-family" Duggars, who have opposed rights for LGBT people, have face scandal after scandal. Josh Duggar had two paid accounts on cheating website Ashley Madison and paid an adult film actress for sex while his wife was pregnant with his fourth child.