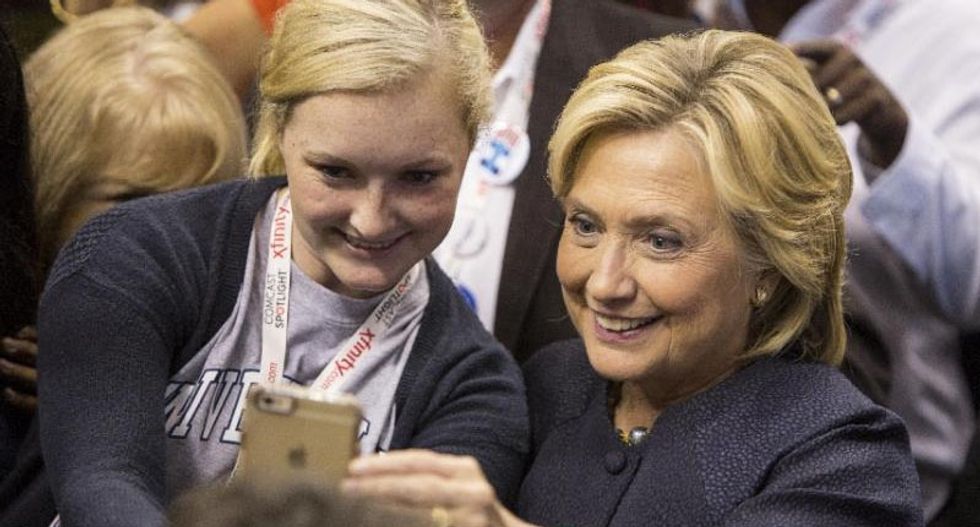 At least one email showed Hillary Clinton livid over a State Department plan to replace "mother" and "father" with the more gender-neutral "parent one" and "parent two" on passport applications, saying "I'm not defending that decision" (AFP Photo/Scott Eisen)

The State Department released a new batch of 6,300 pages of emails sent or received by Hillary Clinton when she served as top US diplomat and controversially used a private email account.

The communications, which are dated from 2010 and 2011, have confidential or sensitive information redacted and were made public on a State Department website from a total of 3,849 documents.

It is the fifth such tranche of emails released since May and brings the total of released emails to 37 percent of all the correspondence that Clinton provided her former department for archiving.

It also reportedly saw 215 new emails retroactively labeled as classified by US authorities, a development the Republican National Committee was quick to note.

"With the number of emails deemed classified doubling to more than 400, this latest court-ordered release shows Hillary Clinton put our national security in more jeopardy than previously known," RNC chairman Reince Priebus said in a statement.

"Hillary Clinton's reckless attempt to skirt transparency laws and her dishonest response to public inquiries underscore why she can't be trusted in the White House."

The newly released messages ranged from the mundane and trivial to the diplomatic.

Those signed by Clinton, who is currently the frontrunner for the 2016 Democratic presidential nomination, rarely exceeded a line or two.

"Did you find out if he's (Henry Kissinger's) going to China?" Clinton asked aide Jake Sullivan in November 2010.

But at least one email reflected a secretary of state livid over a matter that touched on gay marriage, an issue on which she has since experienced a conversion.

Clinton sounded furious over a State Department plan to replace "mother" and "father" with the more gender-neutral "parent one" and "parent two" on passport applications.

"I'm not defending that decision, which I disagree w and knew nothing about, in front of this Congress," Clinton fumed to top aides in a January 2011 email.

"I could live w letting people in nontraditional families choose another descriptor so long as we retained the presumption of mother and father," she added.

"We need to address this today or we will be facing a huge Fox-generated media storm led by (Sarah) Palin et al."

Clinton's communications have been the subject of controversy since March, when she acknowledged exclusively using a private email address from 2009 to 2013, eschewing an official government account despite official recommendations.

She has stressed that her actions were legal, although she apologized in September.

In late 2014 she turned over 55,000 printed pages of work-related emails to the State Department with the purposes of archiving and making them public.

The remaining messages were personal, Clinton has said, and were deleted from the server.

The State Department announced it aimed to make the official emails available online, an initiative supported by Clinton, who has pledged full transparency.

But a judge ordered an accelerated schedule, forcing State to publish email tranches each month until the project's completion next January.

Clinton testifies before Congress on October 22.