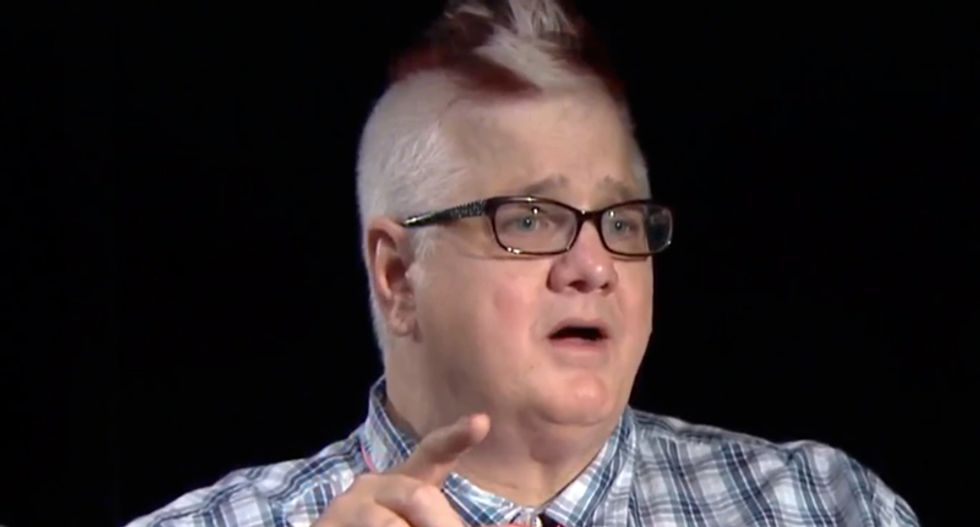 A Navy veteran from Colorado who identifies as neither male nor female has sued the U.S. Department of State after being denied a passport for refusing to select a gender on the application, court documents showed on Monday.

Dana Zzyym claimed in a federal discrimination lawsuit filed in the U.S. District Court in Denver that it was a constitutional violation to force an “intersex” person to pick either a male or female when seeking to travel abroad.

“I am not male, I am not female, I am intersex, and I shouldn’t have to choose a gender marker for my official U.S. identity document that isn’t me,” Zzyym said in a statement.

The lawsuit names U.S. Secretary of State John Kerry and the director of the Colorado passport agency as defendants.

The State Department did not respond immediately to a request for comment.

Zzyym was born in 1958 with “ambiguous external sex characteristics,” and the gender box on the birth certificate was initially left blank, the lawsuit said.

Zzyym’s parents and doctor decided “Dana would be raised as a boy” with the name Brian Orin Whitney and “male” was later added to the birth certificate, it said.

“Similar to many other intersex children, by age five, Dana had been subjected to several irreversible, invasive, painful, and medically unnecessary surgeries designed to make Dana’s body conform to binary sex stereotypes,” the complaint said.

Whitney enlisted in the U.S. Navy in 1978 and served as a machinist mate during three tours of duty in Beirut and one throughout the Gulf, it said.

Leaving the Navy in 1984, Whitney later realized that the male gender identification was “arbitrary” and explored living as a woman, which did not feel right either, according to the lawsuit.

Whitney ultimately adopted the name Dana Zzyym and was denied a passport last year when attempting to travel to Mexico City for the International Intersex Forum.

Zzyym is not seeking a monetary award, Castillo said, but merely to force a change in U.S. policy.

“Dana is being deprived of the right to lawfully exit the United States because of personal characteristics, and that’s discrimination, pure and simple,” Castillo said.

(Reporting by Keith Coffman in Denver; Editing by Paul Tait)

Watch a video report on this story below: