'YOU ARE A LYING B*TCH!': Truthers attack grieving mom's book about her Sandy Hook victim son 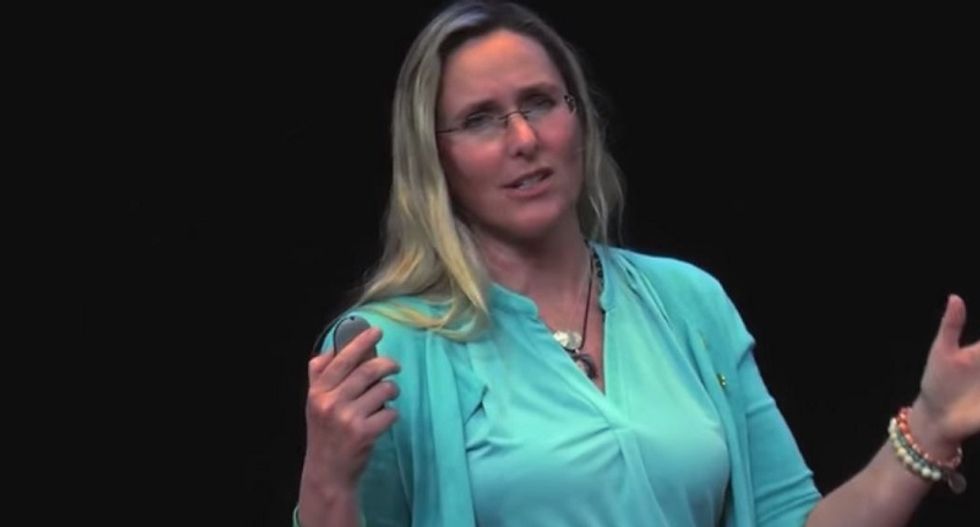 Sandy Hook truthers have swarmed the Amazon reviews of a book written by the mother of a 6-year-old massacre victim, accusing her of "Fraud, Treason, And Tyranny."

Scarlett Lewis is the mother of Jesse Lewis, a first grader who was murdered along with 25 others -- mostly little children -- when a mass shooter went on a rampage at Sandy Hook Elementary in December of 2012. She penned a book about her grief journey, called Nurturing Healing Love: A Mother's Journey of Hope and Forgiveness.

But according to the Seattle Times, instead of receiving support after enduring an unthinkable loss, conspiracy theorists have come out in force to malign Lewis.

A quick scan of her Amazon page reveals numerous comments claiming Lewis is lying and urging readers to watch the conspiracy theory video, "We Need to Talk About Sandy Hook," which is posted to YouTube.

One poster on Amazon calling themselves "Operation Truth," wrote:

"DO NOT BUY THIS BOOK !! This book is based on pure lies. The Sandy Hook Elementary did not have a school shooting, this was a Hoax that was used to create laws under false pretense !! Instead of buying this book, research the video called "We need to talk about Sandy Hook" And here's the best part... It's FREE to watch the video. These people are profiting off of LIES, and they are erasing truth from history. This is Fraud, Treason, And Tyranny."

Another user said Lewis should be jailed and claimed no one was killed at Sandy Hook.

"'Scarlett' should be put in jail! Zero Stars!! This book should be labled ((FICTION)) The Sandy Hook Event is *PROVEN* to have been a 'drill'. If you are reading this and didn't know that this event was a staged psycological operation... you should do some research. ;) ...The good news is nobody died," the unnamed user wrote.

"This woman is a liar no child died at Sandy hook. Sandy hook is a hoax, it was staged. Go watch "We need to talk about Sandy Hook" and pay attention. SANDY HOOK WAS A STAGED HOAX NO ONE DIED!"

Her TEDx talk about her son and her book has similarly callous comments, calling her a "crisis actor," a term conspiracy theorists use to explain the grief-stricken survivors of mass casualties they don't believe occurred.

"Scarlett Lewis, YOU ARE A LYING B*TCH!" Joe Jones posted to the YouTube video of Lewis talking to a TEDx audience about her book and slain child. Searching Lewis' name on YouTube turns up videos made by people intent on besmirching her as a scam artist.

The coordinated attack on Lewis has Amazon users giving the book a one-star rating, which the Times says is a new tactic to silence people. Before the conspiracy theorists found the Amazon page, the book was getting largely positive reviews and five stars, the highest rating.

"Increasingly... people are launching coordinated campaigns to push political and social agendas through negative reviews often only tangentially related to the product for sale," Times reporter Jay Greene writes. "They are able to do so because Amazon welcomes reviews regardless of whether the writer has actually purchased the product."

There are several conspiracy theories surrounding the tragedy that took the lives of 20 small children and 6 school staffers, but perhaps the most commonplace is that the U.S. government fabricated the whole thing as a means of instituting tighter gun control laws. The bogus claim has been peddled by high-profile conservative personality Alex Jones.

Promoting the conspiracy theory is far from harmless, as believers have gone so far as to harass traumatized survivors of the massacre.

But Lewis is heartrendingly deadpan in regards to her feelings about the reviews. She tells the Times, "Once you’ve had a child murdered, shot in the forehead, there’s not a lot that can ruffle your feathers."

Watch Lewis talk about her book and her son, Jesse, as posted online here: