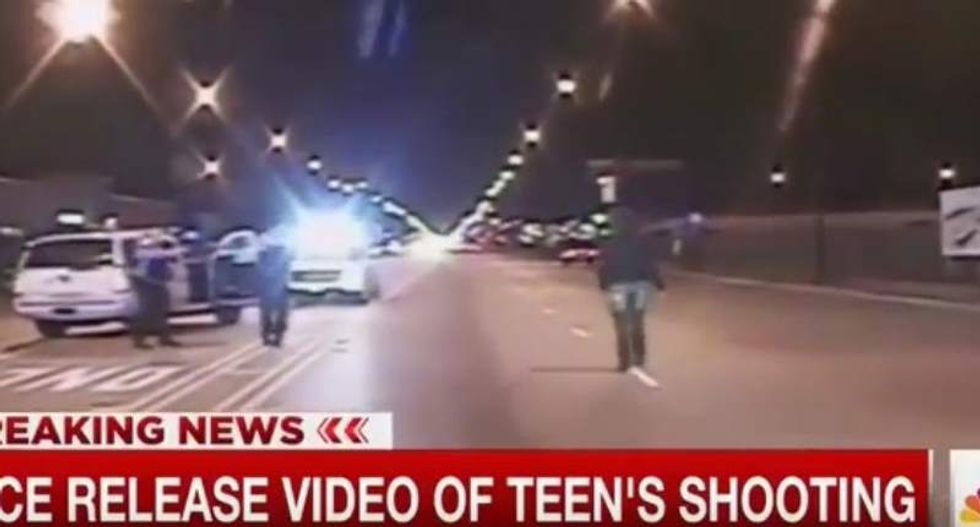 A white Chicago policeman was charged on Tuesday with murdering a black teenager, a prosecution that was speeded up in hopes of staving off a fresh burst of the turmoil over race and police use of deadly force that has shaken the United States for more than a year.

A highly anticipated video of the Oct. 20, 2014 shooting was released on Tuesday afternoon in accordance with a court order and a day earlier than expected. The police website became overwhelmed and did not function.

Seventeen-year-old Laquan McDonald was shot 16 times by police officer Jason Van Dyke, who emptied his gun and prepared to reload, prosecutors said. Van Dyke, 37, has said through his lawyer and the police union that the shooting was justified because he felt threatened by McDonald.

"Clearly, this officer went overboard and he abused his authority, and I don't think use of force was necessary," top Cook County prosecutor Anita Alvarez said at a news conference after the hearing.

"It is fine to be passionate but it essential to remain peaceful," Emanuel told a news conference to announce the release of the video, which was taken by a police patrol car's dashboard camera. Emanuel was flanked by a dozen community leaders at the news conference.

At the same news conference, Police Superintendent Garry McCarthy said police would "facilitate" protests but would not tolerate criminal behavior.

Van Dyke was denied bail at a hearing in Chicago's main criminal courthouse hours after prosecutor Alvarez announced charges of first-degree murder. If convicted, Van Dyke could face 20 years to life in prison.

At the brief court hearing, prosecutor Bill Delaney told Cook County Circuit Court Associate Judge Donald Panarese that a video of the 2014 shooting does not show McDonald, who was armed with a knife, advancing on Van Dyke, and that witnesses concur on that fact.

The judge scheduled another hearing for Monday and asked to see the video then in order to reconsider the issue of bond.

Van Dyke has had 20 misconduct complaints made against him during the past 4-1/2 years, none of which led to any discipline from the Chicago Police Department, according to research by Craig Futterman, a University of Chicago law professor and expert on police accountability issues.

He believes Van Dyke is the first Chicago police officer to be criminally charged for an on-duty shooting.

Alvarez also said prosecutors moved up the timing of the charges ahead of the release of the video.

"With release of this video it's really important for public safety that the citizens of Chicago know that this officer is being held responsible for his actions," she said.

Last week, a court ordered the release of the video. The police union objects to its release.

McDonald's death came at a time of intense national debate over police use of deadly force, especially against minorities. A number of U.S. cities have seen protests over police violence in the past 18 months, some of them fueled by video of the deaths.

The uproar was a factor in the rise of the Black Lives Matter civil rights movement and has become an issue in the 2016 U.S. presidential election campaign.

McDonald's family called for calm, as did city authorities and black community leaders.

"No one understands the anger more than us, but if you choose to speak out, we urge you to be peaceful. Don't resort to violence in Laquan's name. Let his legacy be better than that," McDonald's family said in a statement through their lawyer.

In Baltimore and Ferguson, Missouri, family appeals for peace were not always heeded.

Black community leaders in Chicago said they feared violent protests in reaction to the video. Politicians and church leaders in the Austin neighborhood urged potential demonstrators to protest peacefully.

"We feel your pain, but we challenge you to turn your pain into power. We know protests are coming, please allow them to be peaceable," the Rev. Ira Acree said at a news conference.

From 2008-2014 there were an average of 17 fatal shootings by police each year, according to data from the Independent Police Review Authority, which investigates police misconduct.

Almost all shootings, fatal and non-fatal, are found to be justified.

(Reporting by Mary Wisniewski; Additional reporting by Fiona Ortiz and Justin Madden in Chicago and Ben Klayman in Detroit; Writing by Grant McCool; Editing by Jonathan Oatis and Lisa Shumaker)

The dashboard camera footage can be seen here. Note: The video is graphic.