It's an 'epidemic': Young black men killed by US police at highest rate in year of 1,134 deaths 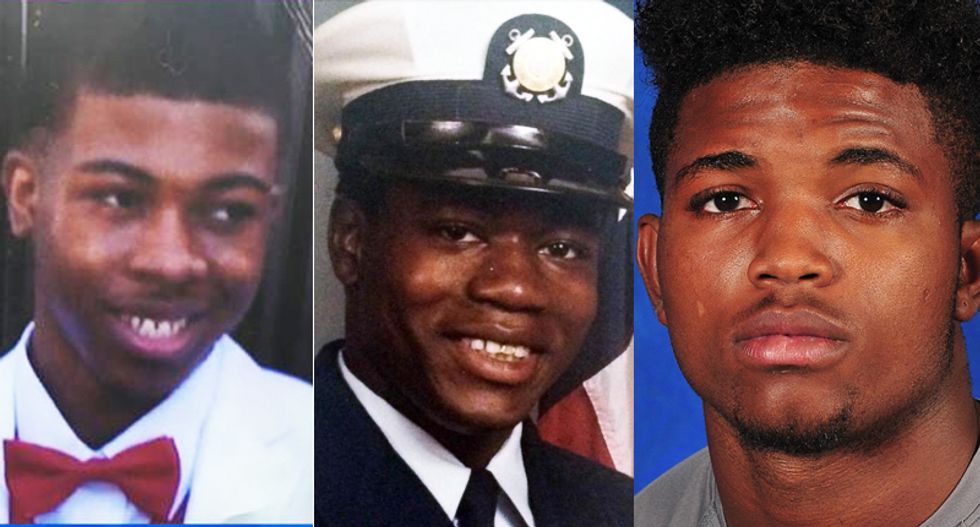 Young black men were nine times more likely than other Americans to be killed by police officers in 2015, according to the findings of a Guardian study that recorded a final tally of 1,134 deaths at the hands of law enforcement officers this year.

Related: The Guardian view on US killings by police: why we must keep counting

Despite making up only 2% of the total US population, African American males between the ages of 15 and 34 comprised more than 15% of all deaths logged this year by an ongoing investigation into the use of deadly force by police. Their rate of police-involved deaths was five times higher than for white men of the same age.

Paired with official government mortality data, this new finding indicates that about one in every 65 deaths of a young African American man in the US is a killing by police.

“This epidemic is disproportionately affecting black people,” said Brittany Packnett, an activist and member of the White House taskforce on policing. “We are wasting so many promising young lives by continuing to allow this to happen.”

Speaking in the same week that a police officer in Cleveland, Ohio, was cleared by a grand jury over the fatal shooting of Tamir Rice , a 12-year-old African American boy who was carrying a toy gun, Packnett said the criminal justice system was presenting “no deterrent” to the excessive use of deadly force by police. “Tamir didn’t even live to be 15,” she said.

Protests accusing law enforcement officers of being too quick to use lethal force against unarmed African Americans have spread across the country in the 16 months since dramatic unrest gripped Ferguson, Missouri, following the fatal police shooting of 18-year-old Michael Brown by a white officer.

Overall in 2015, black people were killed at twice the rate of white, Hispanic and native Americans. About 25% of the African Americans killed were unarmed, compared with 17% of white people. This disparity has narrowed since the database was first published on 1 June, at which point black people killed were found to be twice as likely to not have a weapon.

The Guardian’s investigation, titled The Counted, began in response to widespread concern about the federal government’s failure to keep any comprehensive record of people killed by police. Officials at the US Department of Justice have since begun testing a database that attempts to do so, directly drawing on The Counted’s data and methodology .

The FBI also announced plans to overhaul its own count of homicides by police, which has been discredited by its reliance on the voluntary submission of data from a fraction of the country’s 18,000 police departments. The Guardian’s total for 2015 was more than two and a half times greater than the 444 “justifiable homicides” logged by the FBI last year.

FBI director James Comey said in October it was “embarrassing and ridiculous” that the government did not hold comprehensive statistics, and that it was “unacceptable” the Guardian and the Washington Post, which began publishing a database of fatal police shootings on 1 July, held better records. The Counted will continue into 2016.

Data collected by the Guardian this year highlighted the wide range of situations encountered by police officers across the US. Of the 1,134 people killed, about one in five were unarmed but another one in five fired shots of their own at officers before being killed. At least six innocent bystanders were killed by officers during violent incidents; eight police officers were killed by people who subsequently died and appeared in the database.

http://interactive.guim.co.uk/embed/2015/08/2015-08-counted-cards/index.html?id=345More than 21% of deadly incidents began with a complaint to police alleging domestic violence or some other domestic disturbance. About 16% arose from officers attempting to arrest a wanted person, execute a warrant or apprehend a fugitive. Another 14% of killings followed an attempted traffic or street stop, 13% came after someone committed a violent crime and 7% after a non-violent crime.

In addition to those killed after opening fire, 160 people were accused of refusing commands to drop a weapon. Another 157 were said to have pointed or levelled a gun or nonlethal gun at officers. Police alleged that 158 people killed had “charged”, advanced at or fought with officers. And while 79 people were killed after allegedly “reaching for their waistband” or grabbing for a weapon, 44 attacked officers, some with knives and blades.

“It would appear that police officers are often confronting people who are armed, non-compliant and threatening,” said David Klinger an associate professor of criminology at the University of Missouri-St Louis.

The extensive demographic detail gathered as part of the study also shed light on the diverse set of people who died during confrontations with law enforcement. The group ranged in age from six-year-old Jeremy Mardis , in Marksville, Louisiana, to 87-year-old Louis Becker in Catskill, New York. Officers killed 43 people who were 18 years old and younger.

Mental health crises contributed directly to dozens of police-involved deaths. In at least 92 cases that led to fatalities this year, police had been alerted over a suicidal person or someone who was harming him or herself. In 28 other deadly incidents, relatives or associates later said that the person killed had been suicidal before they died.

Of 29 military veterans who were killed by police in 2015, at least eight were said to have been suffering from post-traumatic stress disorder (PTSD) following their service. In all, mental health issues were reported in relation to 246 people killed by police this year – more than one in every five cases. On at least eight occasions, the death was officially ruled a suicide, prompting claims from relatives that officers were escaping scrutiny .

“We have a tremendous problem,” said Dr Daniel Reidenberg, the managing director of the National Council for Suicide Prevention. “In a society where firearms are as prevalent as they are, and where people know law enforcement are trained to respond to a certain situation in a certain way, we have a problem.”

Regional disparities also emerged from the year’s data. Earlier this month, the Guardian published a series of special reports on Kern County, California , where police killed more people relative to the size of its population than anywhere else in the country. Law enforcement officers there killed more people in 2015 than the NYPD, which has 23 times as many officers policing a population 10 times as big.

Following a spate of killings in recent weeks, New Mexico’s 21 deaths in 2015 represented the highest per-capita rate of any state. New Mexico’s rate of one killing by police for every 99,300 residents was more than 10 times greater than that of Rhode Island, where only one person among a population of more than a million was killed by law enforcement.

The death of Kenneth Stephens, 56, in Burlington, Vermont, last week meant that all 50 states and the District of Columbia had at least one death caused by police in 2015.

Only one of the 21 people killed by police in New Mexico, however, was unarmed. By contrast nine of the 25 people killed in New York state were unarmed, and seven of these were black men. While five of Georgia’s 38 deaths followed a suspect being shocked with a Taser – the highest proportion in the country – no Taser-involved deaths were recorded in more than half a dozen states.

In all, 89% of deaths by police in 2015 were caused by gunshot, 4% were Taser-related, 4% were deaths in custody following physical confrontations and 3% were deaths of people struck by police officers driving vehicles.

The Counted found that in at least 255 deaths in 2015, the actions of police officers involved had been ruled justified. These rulings were typically made by a district attorney who worked alongside the department of the officers involved in prosecuting everyday crimes. About a quarter of the justified cases were decided on by a grand jury of the public.

By the end of the year, one officer had been acquitted of charges relating to a fatal shooting in Pennsylvania, and the first attempt at prosecuting one of the officers involved in the deadly arrest of Freddie Gray in Baltimore, had ended in a mistrial . Two deputies in Georgia charged over the in-custody death of Matthew Ajibade were cleared of manslaughter but convicted of cruelty, perjury and falsifying paperwork.

Philip Stinson, an associate professor at Bowling Green University who monitors the subject, said the number of officers being charged had risen sharply this year. “There is more public awareness, and I do think that in the past few years the veracity of police officers is being questioned more, after their statements were shown to not be consistent with video evidence,” he said.