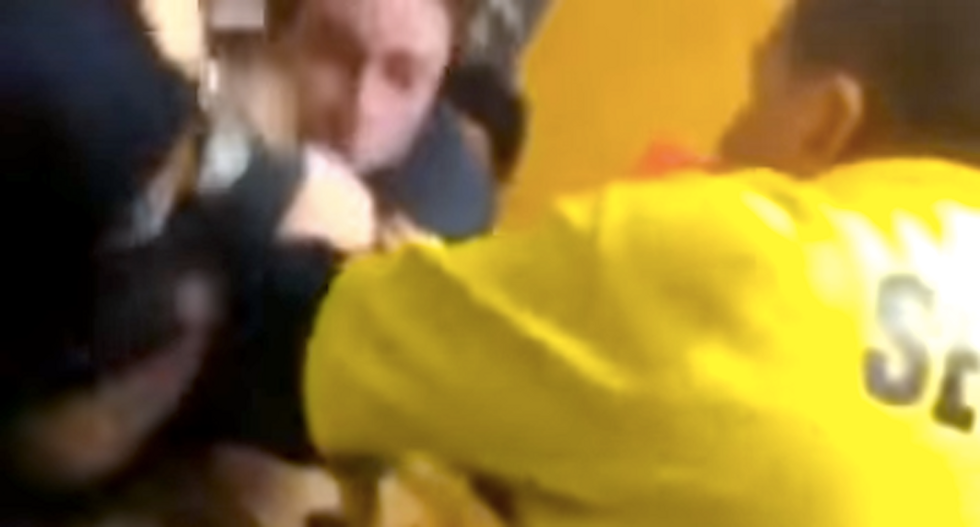 A school resource officer is under investigation after a student’s cell phone video captured him repeatedly punching a teenager instead of de-escalating the incident. Temporarily reassigned pending an internal investigation, the officer has been accused of having prior run-ins with the student assaulted in the video.

On Thursday, a female student at Millard South High School recorded a cellphone video of several students arguing in the hallway before one of them suddenly charged into another teen. As security guard Tim Kimpson immediately intervened, Kimpson and the two students fell to the ground before continuing the fight on their feet.

Instead of de-escalating the fight, Officer Nicholas Caniglia could be seen in the video grabbing one of the teens and repeatedly punching him at least five times in the head and upper body. According to the Omaha Police Department, one of the teens punched Kimpson’s left cheek during the brawl and was later cited for misdemeanor assault.

In text messages with KMTV, the teen Caniglia punched in the video said he was okay, but shaken up Thursday night. According to his friends, they have had prior incidents with Caniglia. After witnessing the fight, Millard South senior Andreas Dunn asserted, “I’m not the kind of person who hates cops, but he’s [Caniglia] not a nice person. And he’s always been that way.”

Recent videos have revealed a myriad of school cops attacking unarmed students. On Monday, Officer Rigo Valles was cleared of any wrongdoing after grabbing a student by the neck and slamming him to the floor. In October, Richland County Deputy Ben Fields was fired after students recorded him flipping over a girl’s desk and dragging her across the floor. Oklahoma City Master Sgt. Thomas Jaha was charged with assault and battery in October as well, after repeatedly punching a student in the face for not having a hall pass.