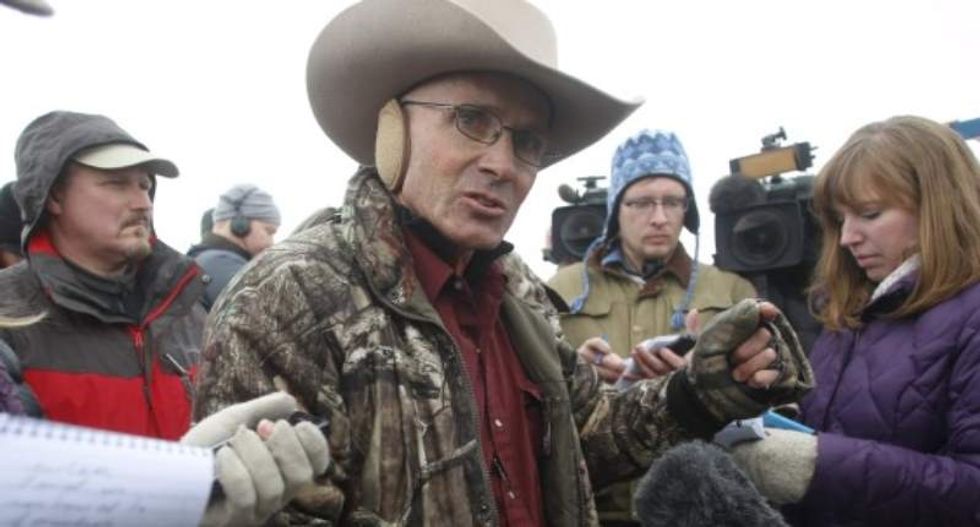 B.J. Soper, the founder of the Pacific Patriots Network, walked out of the FBI press conference about the Malheur National Wildlife Refuge occupation after 40 seconds “because it was all lies.” At the presser in Burns, Oregon, the FBI and the U.S. Attorney for the District of Oregon announced that in the last 24 hours, eight people have been arrested and charged with “conspiracy to impede officers of the United States from discharging their official duties through the use of force, intimidation, or threats,” and that one person was killed — Robert “LaVoy” Finicum.

Soper claims, “I believe Finicum was murdered,” a view shared by other residents of Harney County who attended the media briefing. Soper also warns, “We’ve got a third one. There was Ruby Ridge and Waco, now there is Burns.”

While 10 militants reportedly remain holed up in Malheur Refuge, which is now ringed by heavily armed FBI and police units and checkpoints on all access roads, Soper says, “They are terrified.” Soper and other militias that support the militants are urging them to surrender. Soper also says he told the Bundys to end their occupation weeks ago.

In what is a highly unusual move after an armed takeover of federal lands and facilities, the FBI said it is allowing all remaining militants safe passage out of the Malheur Refuge and to their home states. FBI Special Agent Greg Bretzing said, “If the people on the refuge want to leave, they are free to do so through the checkpoints where they will be identified.”

The FBI also held the Bundy militia responsible for the death of Finicum and any more bloodshed. “These individuals have chosen to threaten and intimidate the America they profess to love and through their criminal actions have chosen to bring these actions upon themselves.”

Thom Davis, a rancher in the area sees it differently. “Harney County’s got blood on their hands.” Davis, who’s the spitting image of Sam Elliott, supported the Bundy militia and was on the same highway as Ammon and Ryan Bundy when they were caught by the FBI and police — but was behind their two-vehicle caravan and the Raw Story reporters.

On the same highway, a few minutes ahead of the Bundys, was Duane Schrock, a rancher with the Harney County Committee of Safety. Schrock says he was for the Bundys because of “liberty and freedom. They were shaking the world and I hope it doesn’t stop.”

He, Susy Pearce, and three others were headed to Grant County where the Bundys, Finicum — who acted as their spokesperson, Ryan Payne, their militia leader, and others were going to set up another Committee of Safety. The Bundys were developing these committees as bodies of popular self-rule that would displace existing county governments and severely truncate the federal government by shifting power to those who worked the land, at least in the West.

Schrock and Pearce claim right before the feds nabbed the Bundys, they saw seven SUVs and pickup trucks laying in wait off the two-lane mountain highway that formed half of the detail that took down the Bundys. They believed those were full of FBI agents.

Soper alleges that at the other end of the trap, the Bundys were ensnared by 11 vehicles. When Raw Story chanced upon the scene shortly after it happened, but unaware of what transpired, only a few marked police vehicles were evident along with officers carrying semi-automatic rifles. Reports of the confrontation where Finicum was shot so far have relied on FBI accounts that describe it as a traffic stop. If confirmed, the use of 18 vehicles with armed agents and police would be unlike any other traffic stop.

Soper says the FBI called him to inform him of the arrests, saying, “They legally issued warrants on multiple people and said it wasn’t an attack on the refuge.” He was still incensed that the FBI did not inform him of Finicum’s death.

Another militia source, who wished to remain anonymous, claims Grant County Sheriff Glenn Palmer participated in operation to arrest the Bundys. “He invited them to Grant County. He entrapped them. He participated in the ambush, either by securing the roadblock or down by the ambush site itself.” That is potentially explosive, if true. Palmer met with the Bundys earlier and supported some of their demands as well as their overall goal of severely limited constitutional government.

Many sources say Grant County is even more fertile ground for the Bundy militia’s tactic of grabbing federal land by force and upending government because they believe local power trumps federal jurisdiction. While in Harney County, ranchers provided much support for the Bundys. In Grant County, the driving force is the logging industry. Overall, the goal is to ramp up extractive industries to revive dying rural economies. Many residents of Harney County, including opponents of the Bundys, blame government arrogance, mismanagement, and environmental laws for strangling the economic life out of their communities.

The Bundys harnessed that anger to astonishing success for nearly a month, but they became intoxicated by a power based more on ethereal media than men under arms. The Bundys won their first standoff with the feds, near their father, Cliven Bundy’s ranch in Nevada, based on media and threats of violence. But fatal missteps piled up in Oregon in the last week. By showing up with about 20 armed militiamen to a community meeting at a school in Burns last week, the Bundys solidified local outrage. By creating new conflicts with land grabs near the Malheur Refuge and in New Mexico, they mocked the seeming inaction of an already riled-up U.S. government. And by putting all their leadership undefended in a couple of vehicles on an easily isolated road, they handed the feds the opportunity to conduct a successful decapitation strike.

The feds had a touch of gloating at the press conference, praising themselves repeatedly for their efforts to resolve the conflict peacefully. But they also created a new martyr for the militia and patriot movements by killing Finicum. The anger on display at the FBI press conference was raw, and there were numerous warnings it will darken in the days ahead for Burns. “This is just the beginning,” was heard more than once. Many others spoke of corruption in the county that was going to come to light — implying the conflict will be fought on more fronts now.

Soper says, “The fire has been lit in the ranching, logging, and farming communities about restoring the rights to the land.” He says hundreds, even thousands, of patriots will flock to the region. For now it’s talk, a way to vent fury given feelings of powerlessness. But given the desperation stalking much of rural America, there will likely be other Bundys and Finicums who shape it into another whirlwind of anger aimed at what they see as their government oppressors.

Arun Gupta contributes to The Washington Post, YES! Magazine, In These Times, The Progressive, Telesur, and The Nation. He is author of the forthcoming Bacon as a Weapon of Mass Destruction: A Junk-Food Loving Chef’s Inquiry into Taste, from The New Press. Follow him @arunindy or email at arun.indypendent_@gmail.com.