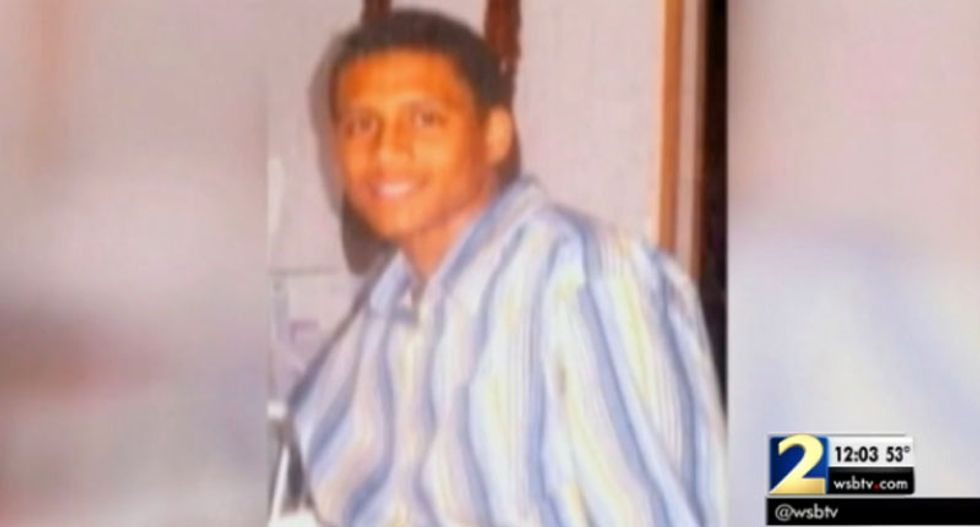 A prosecutor in Georgia is to seek two indictments for murder against a police officer who shot and killed Anthony Hill, an unarmed black man who was naked when he died.

DeKalb district attorney Robert James said he would ask a grand jury to indict Officer Robert Olsen of the DeKalb County police department, accused of shooting Hill on 9 March last year while responding to a call of a man behaving erratically outside a suburban Atlanta apartment complex.

If Olsen is indicted, it will mark the first time an officer has been prosecuted in a fatal shooting in Georgia since 2010.

Related: Risk of being killed by police is 16 times greater for those with mental illness

The announcement means that James’s office will be recommending the charges against Olsen to a criminal grand jury to be convened later this month. In Georgia, a prosecutor cannot bring charges without a grand jury indictment.

In addition to the murder charges, James also recommended one count of aggravated assault, two counts of violation of oath of office by a public officer, and one count of making a false statement.

“Whenever the DA’s office presents a case to the grand jury, it is the position of that office that a crime was committed, and that is our position,” Hill said. “This is the decision that facts and justice require I make.”

On 9 March 2015, neighbors reported to police that Hill was knocking on random doors in an apartment complex in Chamblee, a suburb north-east of Atlanta, and that he had removed all of his clothes and was jumping repeatedly of his second-storey balcony.

Hill, a 27-year-old US air force veteran, was believed to be experiencing a psychiatric crisis on the afternoon he was killed. An attorney for Hill’s family said he had been discharged from the armed forces after being diagnosed with bipolar disorder.

Police said that at some point after Olsen arrived on the scene, Hill ran toward him, causing the officer to fear for his life. Olsen testified before a civil grand jury that he believed Hill might be high on PCP or bath salts, which contributed to his decision not to use a less-lethal Taser weapon instead of his firearm.

The decision comes about two months after that same civil grand jury recommended further investigation in the case. Civil grand juries cannot bring charges, but have been used by some district attorneys to allow citizen input in cases involving use of force by law enforcement. In June, James told the Atlanta Journal-Constitution that he had convened the grand jury to make the process transparent and because he wanted “citizens as much as legally possible to have a vote”.

The civil grand jury’s recommendations on Hill’s case included conducting further interviews with several of the officers on the scene.

Before the criminal grand jury, Olsen could enjoy a privilege unique to law enforcement officers in Georgia. The state is the only one to permit officers facing possible criminal charges to be present for the entirety of the grand jury proceedings and to give a statement at the conclusion which is not subject to cross-examination.

“Under Georgia law, our legislature has seen fit to give officers more rights in front of a grand jury than an average citizen,” James said.

An investigation by the Atlanta Journal Constitution and 2 Action News found that of 185 fatal shootings by law enforcement in the state since 2010, no deaths have yet resulted in charges. One officer was briefly indicted in connection with the 2012 death of Walter Folds , but the charges were dropped less than 24 hours after they were filed. Folds was shot in the back of the head by an officer in plainclothes, according to the investigation.

Olsen would be at least the tenth police officer to be charged with a crime after a fatal shooting in 2015, according to the Guardian’s ongoing investigation into police killings, The Counted. James said he would begin presenting the case to the grand jury on 21 January.

A representative from the DeKalb County police department did not immediately respond to questions from the Guardian. Olsen could not be reached for comment.

Watch video, via WSB-TV, below:

The head of Cincinnati's police union demanded the Cincinnati Art Museum take down a painting that he claims promotes violence against officers.

The painting by artist Magnus Juliano shows Winnie the Poof handcuffed and lying face-down in a pool of blood with the character Piglet, who's wearing a police hat and holding a gun, while Tigger holds a sign off the side reading, 'Off the pig,'" reported WXIX-TV.

Desperation turns into sorrow in the aftermath of Texas school shooting

Desperation turned to heart-wrenching sorrow for families of grade schoolers killed after an 18-year-old gunman barricaded himself in their Texas classroom and began shooting, killing at least 19 children and their two teachers.

Relatives who gathered at a civic center following the shooting Tuesday at Robb Elementary School in the southwestern Texas town of Uvalde pleaded for information and turned to social media for help. By Wednesday morning, many were left with the grim reality of an unimaginable horror as the names of the young victims began to emerge.