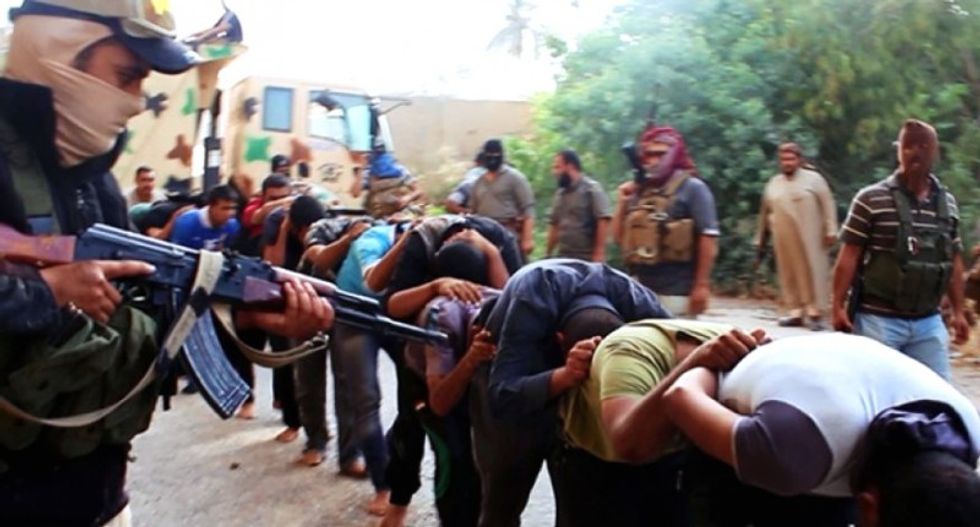 A video released on Sunday by the terrorist group Islamic State claimed to show the nine Paris attackers in Iraq and Syria, some time before they killed 130 people in the French capital on 13 November 2015.

Related: Search for US workers kidnapped in Baghdad focuses on Sadr City

In the video, Isis also threatens an attack on the UK – showing footage of major London sites, as well as David Cameron , the prime minister, and John Bercow, the Speaker of the House of Commons, with crosshairs over their faces. They are shown towards the end of the 17-minute clip, which predominantly focuses on the alleged Paris attackers.

In the video, the nine assailants including Bilal Hadfi, Samy Amimour and suspected ringleader Abdelhamid Abaaoud are identified by their noms de guerre and shown carrying out beheadings and participating in target practice – scenes similar to those found in previous Isis propaganda footage.

If the identities of the men in the video are confirmed as those who carried out the Paris attacks, it would indicate that the nine men were not only influenced by Isis – but rather were coordinated by the group from strongholds in Syria and Iraq.

The video seemingly aims to show that the attackers, some of whom had French and Belgian passports, had committed atrocities and trained in Isis-held territory. The video, which features the nine men one by one, appears to be shot in locations with similar topography to previous propaganda videos shot near Raqqa, Syria.

The Guardian could not independently verify the footage, nor the timeline it purports to depict.

A spokesman for the UK government said: “We are currently examining this latest Daesh propaganda video - another desperate move from an appalling terrorist group that is clearly in decline.”

The video opens with edited news footage of the Paris attacks, with graphics depicting the targets of the coordinated assault. It incorporates bystander footage from outside the Bataclan theater, where 90 people were killed, with several targets aligned with the figures of fleeing Parisians.

The video includes footage of Abdelhamid Abaaoud, the suspected ringleader of the Paris attacks who was killed on 18 November 2015 in a ferocious shootout with French police at an apartment in St Denis, days after the citywide attack.

A voice recording purportedly by Abaaoud plays over footage of Parisians fleeing the attacks and speeches by French prime minister Manuel Valls and President François Hollande. It addresses the coalition forces carrying out air strikes in Iraq and Syria , and threatens further attacks in retaliation.

Several of the men are shown speaking in French with what appear to be native French accents, though with inflections typical of north African immigrant communities.

Hadfi, at 20 the youngest Paris attacker, is seen beheading a man. Hadfi was one of three who attacked the Stade de France and was believed to have fought with Islamic State in Syria. Amimour, 28, one of the Bataclan attackers, who was known to French intelligence services and whose father traveled to Syria to try and bring back his son , is seen holding a captive’s head; while Omar Ismail Mostefai, 29, another of the Bataclan attackers, who detonated his vest inside the concert hall, is seen in the desert landscape holding a victim.

Abaaoud is not seen killing anyone on camera. Those seen being killed in the video have yet to be identified but the activist group Raqqa Is Being Silently Slaughtered claimed to have identified one of the men seen beheaded as a civilian from Raqqa.

Islamic State, also known as Isis or Isil, began teasing the release last week in the latest issue of Dabiq, its monthly magazine, where a still image appeared.